|Learning every day|December 2021, General Secretary Xi Jinping's itinerary is still full.   Delivering New Year’s greetings for the year 2012, attending many important meetings, frequently calling and writing letters, and launching “cloud diplomacy”...Summarizing the important experience of the past year, deploying important tasks for the coming year and the future is the last month of the yea 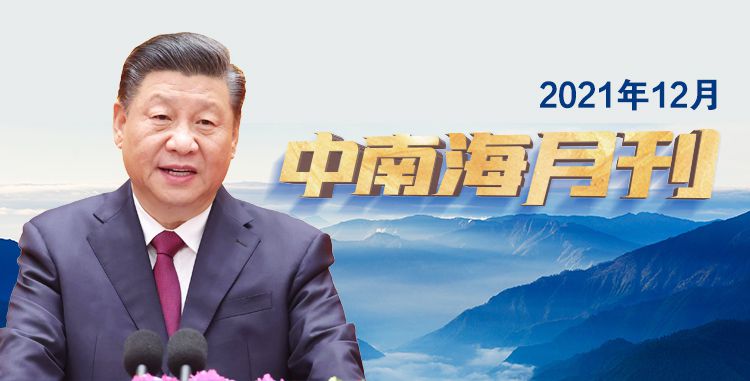 Delivering New Year’s greetings for the year 2012, attending many important meetings, frequently calling and writing letters, and launching “cloud diplomacy”...Summarizing the important experience of the past year, deploying important tasks for the coming year and the future is the last month of the year’s end The main content.

At this moment of saying goodbye to the old and welcoming the new, CCTV's "Zhongnanhai Monthly" uses smart big data to follow with you and review the busy figure of General Secretary Xi Jinping at the end of 2021.

Studying and deploying economic work for the next year is an important issue for the Party Central Committee in the last month of each year.

On December 2, 2021, General Secretary Xi Jinping presided over a symposium with non-party personalities to solicit opinions and suggestions on economic work.

Four days later, on December 6, the General Secretary presided over a meeting of the Political Bureau of the Central Committee to analyze and study economic work in 2022.

Immediately afterwards, from December 8th to 10th, the Central Economic Work Conference was held. This is the highest-level economic work conference every year, and it is also the most authoritative weather vane for judging the current economic situation and setting the macroeconomic policy for the second year.

CCTV's "Wise News" system crawled and analyzed the hotspots of current affairs news on the entire network in December 2021 and found that these three meetings have attracted the attention of netizens, and the associated "especially to understand the people-centered development thinking" "my country The long-term economic fundamentals will not change" and other topics remain hot.

All three meetings fully affirmed the economic work in 2021.

As General Secretary Xi Jinping summed up: “We calmly dealt with the changes in the century and the epidemic in the century, took new steps to build a new development pattern, achieved new results in high-quality development, and achieved a good start to the 14th Five-Year Plan.”

In setting the overall requirements and policy orientation for economic work in 2022, General Secretary Xi Jinping has repeatedly emphasized "to take the lead with stability and seek progress while maintaining stability."

He said at the Central Economic Work Conference: "No matter how the international situation changes, we must unswervingly do our own things, continue to strengthen the economic foundation, enhance scientific and technological innovation capabilities, and enhance overall national strength."

"Seeking progress while maintaining stability" is an important principle of our party's governance of the country.

Religious issues have always been a major issue that our party must handle well in governing the country.

From December 3 to 4, 2021, the National Religious Work Conference will be held again after five years.

The difference from five years ago is that this meeting was held in the form of a teleconference, with branch venues set up in all provinces, autonomous regions and municipalities and the Xinjiang Production and Construction Corps.

At the meeting, General Secretary Xi Jinping put forward the "nine must" for understanding religion, dealing with religious issues, and doing religious work in the new era, which are not only the result of theoretical innovation, but also a guide for scientific action.

This is one of the “nine musts” for doing religious work well, and it was also put forward by General Secretary Xi Jinping at the National Religious Work Conference five years ago.

This year, the general secretary emphasized the need to fully implement the party's basic policy on religious work during inspections to Qinghai and Tibet.

"The Party Upholds the Party's Basic Policy of Religious Work" was also included in the third major historical resolution of the Communist Party of China approved by the Sixth Plenary Session of the 19th Central Committee. Its importance is evident.

General Secretary Xi Jinping attended the opening ceremony of the conference and delivered an important speech. He talked freely with the majority of literary and art workers and encouraged them to actively participate in the construction of a socialist cultural power with a strong historical initiative.

In the December 2021 association map generated by the CCTV network I learning database, we have seen many familiar names.

Among them, there is Russian President Putin.

On December 15, 2021, the Chinese and Russian heads of state held a video meeting, which was the 37th meeting between President Xi Jinping and President Putin since 2013.

"The Winter Olympics Covenant" is one of the key words of this video meeting.

In early 2014, President Xi Jinping made a special trip to Russia to attend the opening ceremony of the Sochi Winter Olympics.

In another month, President Putin will also visit China and attend the opening ceremony of the Beijing Winter Olympics.

Action is the best support.

As President Putin said during the meeting: "I want to point out that we have always supported each other in international sports cooperation, including opposing any attempts to politicize sports and the Olympic movement."

In addition, many related events on the correlation map have unusual meanings.

On December 3, 2021, General Secretary of the CPC Central Committee and President Xi Jinping and Lao People’s Revolutionary Party Central Secretary and President Thong Lun attended the opening ceremony of the China-Laos Railway via a video link. From then on, Vientiane is no longer high mountains and long roads."

On the same day, it was the 80th anniversary of the establishment of the Chinese people's foreign broadcasting industry.

On December 21, 2021, the celebration meeting for the 40th anniversary of the construction of the Xiamen Special Economic Zone was held in Xiamen, Fujian.

In 40 years, a former island town miraculously emerged as a modern international city in the world.

The general secretary pointed out in the congratulatory letter, "This fully proves that the strategic decision of the Party Central Committee to establish a special economic zone is completely correct."

Looking back at December 2021, a list of transcripts brought a successful conclusion to the "milestone year in the history of the party and the country".

The years do not live, the seasons flow.

This is a moment of looking back.

As President Xi Jinping said in his New Year’s message: “In the fleeting time, the China we have seen and felt is a persistent and prosperous China. There are amiable and respectable people and rapid development. , There is a continuing career."

This is a moment of outlook.

In the new year, there are opportunities as well as challenges. "We can only live up to history, the times, and the people if we work hard and do our best." This is the mobilization order just issued by the leaders of the new era.