The owner of the famous "Leave" cry... The departure of the Al-Aqsa oak Sarah Al-Nabali

With the last hours of the last year 2021, Jerusalemites were horrified by the news of the death of the elderly Jerusalemite Sarah Al-Nabali “Umm Walid” (91 years old), who was known for her bond and prayers in Al-Aqsa Mosque half a century ago. 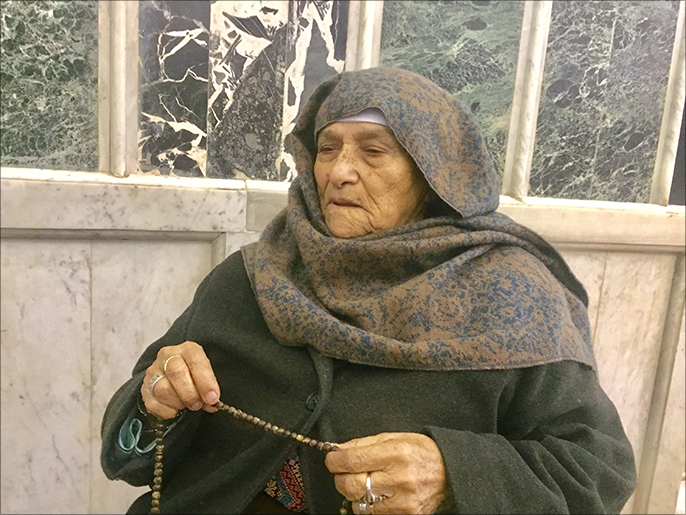 With the last hours of the past 2021, the Jerusalemites were horrified by the news of the death of the elderly Jerusalemite Sarah Al-Nabali, "Umm Walid" (91 years old), who was known for her bond and prayers in the Al-Aqsa Mosque half a century ago, and was famous for her courageous objection to the storming of the occupation forces and settlers of the mosque, and her screaming at them With the word "Let's go", which was transmitted by the tongues after that, and it became a popular national brand.

Throughout her life, Al-Nabali enjoyed good health, and did not suffer from any disease before her death, which was surprising for her family of 7 children and more than 30 grandchildren in Palestine and abroad.

"She used to say to me, my city, pray for me: God does not burden me, and God makes her easy for me." Thus, her granddaughter, Saja al-Nabali, recalled her constant supplication, which seems to have been answered by God. Yesterday, Friday, she was at her son's home in the town of Birnabala, northwest of Jerusalem, and she suddenly refrained from food, so her son was worried about her and presented her to the doctor, who confirmed that she was free of diseases.

The granddaughter continues her speech with emotion and a weeping voice, "My uncle wanted to take her to another doctor to be sure, and on the way to Jerusalem she closed her eyes and her soul overflowed quietly, without pain or noise, my city went."

Umm Walid went, and left her place in Al-Aqsa Mosque empty, as she was the one who did not leave him except for the utmost necessity, and she went to him daily from her house in the Ras Al-Amoud neighborhood south of the mosque, to pray there from early morning until afternoon, until she became a prominent landmark of its landmarks known to the people of the mosque and they forget to attend it.

Her presence was a pleasant experience as her name, for in the vastness of her time inside Al-Aqsa she used to exchange conversations with its pilgrims, and the guards of the mosque would gather around her to tell them stories of the past and her memories that she keeps in a strong memory unaffected by time.

In her last video clip, a few weeks before her death, the elderly Sarah appears surrounded by several guards at the age of her grandchildren, and she tells them how she responded to the occupation policeman who stopped her one day while entering the Al-Aqsa Mosque, and she says in her peasant accent: (See), before you and your family were created, I was in Al-Aqsa.” During her speech, the phrase “For the sake of God” was repeated, and she counted on her fingers the names of the American states that she visited to see her grandchildren, and she is proud that she performed the Hajj twice and performed Umrah 5 times.

Half a century of Rabat

In the prime of her life, Sarah Al-Nabali lived with her husband - who left early - at the foot of the Mount of Olives, east of Al-Aqsa Mosque, near the Gethsemane Church. She gave birth to her seven children there, and since her days she has gone to the mosque to pray.

She used to walk long and arduous distances for a woman of her age, entering the Lions Gate and sitting on a platform or stones on her way to rest, and wherever she sat, she prayed two rak’ahs, until she reached the chapel of Bab al-Rahma, the Dome of the Rock, or the tribal chapel, which gave her strength in the body and a light in the face.

The “Oak of Al-Aqsa” as the Jerusalemites called it, was distinguished by its wearing of traditional dresses and cotton shawls in summer and mystical in winter, and its adherence to a brown rosary made of olive seeds, which the memory of God passes between its fingers, indignant at the violators of His holy house.

With the departure of the elderly Sarah Al-Nabali, Al-Aqsa Mosque loses at the end of 2021 about 10 of its prominent Almoravids and pioneers, including Ghassan Younis, nicknamed Abu Hurairat Al-Aqsa, Badr Al-Rajabi, Ibrahim Siam, Abdul Aziz Al-Absi, and Umm Ratib Badran.