Revisiting the Asian elephants moving north from Yunnan: the "family" is fine after returning to their hometown

In the past year, the Asian elephant herd moved northward from Yunnan, which impressed everyone. On December 9th last year, the elephant group returned to the Mengyang area of ​​Xishuangbanna National Nature Reserve. How are these elephants living now? The elephant group returned to their hometown in Xishuangbanna, "family" is fine   This is a picture taken by the monitoring team of the Yunnan 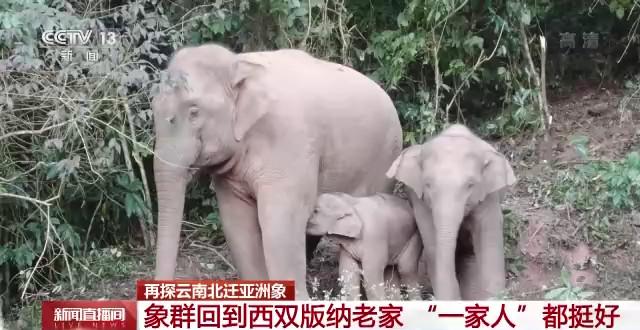 In the past year, the Asian elephant herd moved northward from Yunnan, which impressed everyone.

How are these elephants living now?

The elephant group returned to their hometown in Xishuangbanna, "family" is fine

This is a picture taken by the monitoring team of the Yunnan Forestry and Grass Bureau in the Mengyang area of ​​the Xishuangbanna National Nature Reserve.

In the picture, the 14 elephants are in good condition without the rush of "running away from home" and leisurely "eat, drink and play" at their own homes.

Chen Fei, Director of the Asian Elephant Research Center of the State Forestry and Grassland Administration:

This is the latest activity of the 14 elephant herds we monitored later. In the picture, there are elephants sleeping and some eating. They are very healthy and in very good condition. .

Xishuangbanna has dense vegetation and sufficient water and forages, providing a rich source of food for elephants, which is especially important in winter.

Another good news is that they have met many "little buddies" here. At present, there are at least 5 elephant herds and more than 30 elephants living in the Mengyang area of ​​Xishuangbanna.

On the Asian Elephant Monitoring and Early Warning Platform of the Yunnan Forestry and Grassland Bureau, you can see the real-time status, population, and health status of the elephant herd.

At present, the number of users of the Asian Elephant Early Warning Platform has exceeded 200,000, and a large amount of monitoring and early warning information is transmitted back to the platform every day for further research and judgment.

Forestry, firefighting, public security, and governments at all levels cooperate with each other to carry out normal monitoring of Asian elephants. In key areas and villages, they are equipped with multiple sets of infrared cameras and digital early warning platforms to monitor 24 hours a day in real time and remind villagers in time. Avoiding early, an integrated monitoring, early warning and prevention system is taking shape.

More than 2,000 kilometers of "walking and eating" all the way, people seem to be safe

Let's take stock of the migration trajectory of this herd of elephants and watch their journey home after traveling through mountains and rivers.

In March 2020, 16 wild Asian elephants set off from Xishuangbanna all the way north, starting an interesting and willful journey.

On March 28, the elephant group gave birth to another baby elephant in Mojiang County, Pu'er City, and the number increased back to 17.

On April 24, two male elephants strayed in Yuanjiang and returned to Pu'er. The number of elephants was reduced to 15;

From May 16th to July 7th, the elephants wandered around Honghe and Yuxi to eat, drink, and enjoy their travels.

An episode also occurred. On June 6, a male elephant strayed into the Jinning District of Kunming City for activities; on July 7, the stray elephant safely returned to its original habitat-Xishuangbanna National Nature Reserve Meng In the breeding area, the elephant herd has stabilized at 14 so far;

At 20:08 on August 8, the elephant group crossed the Yuanjiang main stream safely via the Yuanjiang Bridge on the old 213 National Road in Yuanjiang County, Yuxi City, and returned to the south bank from the north bank of the Yuanjiang River. The home is getting closer and closer.

On December 9, the elephant group returned to the Mengyang area of ​​Xishuangbanna National Nature Reserve.

The elephant group marches leisurely, "the elephant chaser" guards all the way

The long-distance travel of more than 2,000 kilometers, the elephant herd was safe and sound, and did not affect the normal life of mankind too much.

On the way, the guardian of the "elephant chaser" is also indispensable.

The elephant group set off from Xishuangbanna, Yunnan Province, all the way to the north, breaking through the traditional habitat range of my country's Asian elephant research since the record, which has attracted a lot of attention.

Yunnan has established a provincial headquarters for the safety and precaution of Asian elephants moving northward in Yunnan, composed of forestry, emergency response, forest fire control, and public security departments. It monitors the elephant herd and promptly warns the evacuation of the masses, and feeds the elephants along the way to guide the elephants to return south.

With the "escort" along with the "xiang chaser", the elephant group can travel leisurely all the way and live in harmony with human beings.

Yang Xiangyu, head of the wild Asian elephant search and monitoring team of the Yunnan Forest Fire Fighting Corps: The

dark circles under the eyes are heavy and heavy, and the eyes are bloodshot, because the elephants only start moving at night. We followed it, and the whole work and rest time changed. Up.

An adult Asian elephant weighs 3 to 5 tons and has an average daily food intake of about 300 kilograms. The elephant herd eats a large amount of local crops almost every day, but the villagers along the way are also new to this group of guests from afar. And tolerant mentality.

A cadre from the village came to my house and said, it’s okay, the national government will come to subsidize you, and it (elephant) can’t work. It’s a big deal. It will be replanted next year.

Over the past few months, the tracking camera has recorded the life and travel of the elephants, telling the story of the simple and warm harmony of human elephants.

Chen Mingyong, a professor at the School of Ecology and Environment of Yunnan University:

This group of elephants moved northward, which should be said to have occurred for the first time in recent decades. This contribution to an elephant group that deviates too far from its habitat and assists in moving back to its original habitat is considered by our country. Groundbreaking.

In China, the Asian elephant is a national first-class protected animal and lives in the tropical rain forests of southern Yunnan.

Over the past 30 years, the number of wild Asian elephants has continued to increase steadily, and now there are more than 300.

In order to better protect the Asian elephants, the forestry and grass department has formulated a preliminary plan for the creation of the Asian Elephant National Park, and resource surveys, scope demonstrations, community interviews, and opinion consultation have been launched.