Great risk of accident when heavy snowfall pulls in

On the night before Sunday, heavy snowfall is expected in Svealand. SMHI warns of traffic problems in connection with up to 15 centimeters of snow being expected. - It is important to think, have plenty of time and keep a good distance, says Linnea Rehn, SMHI. 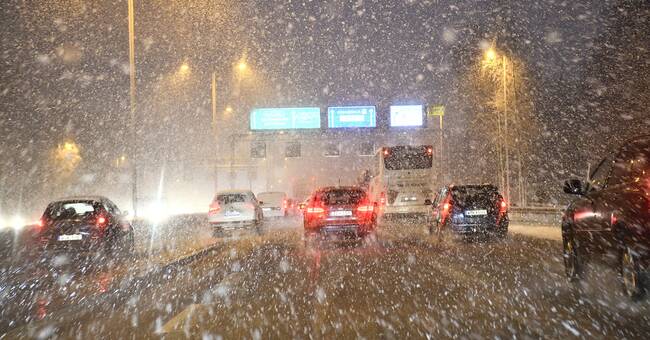 At nine o'clock on Saturday evening, an area with snow is expected to come in over eastern Svealand and Gästrikland.

SMHI has issued a yellow warning which means that the public should be aware of the weather development that may involve risks.

- It is a snowfall that enters the western parts.

It starts in Värmland and Dalarna and moves east during the night and reaches the Stockholm region after midnight, says Linnea Rehn, meteorologist at SMHI.

Locally in Värmland and Dalarna, 15 centimeters of fresh snow can fall, while the Stockholm region will probably have a maximum of five centimeters thick blanket.

- Tonight and tonight quite large amounts of snow will come in a short time.

The risk then is traffic accidents and limited passability.

If you go out early tomorrow morning, they may not have had time to clear snow on small roads, she says.

Train traffic is not usually hit so hard by this amount of snow.

It is more sensitive to snowfall at temperatures of zero degrees as heavy snow can settle on airborne pipes and create problems.

- In southern Svealand we will have a temperature around zero and there the snowfall can turn into rain.

In northern Värmland up Dalarna and in Uppland we have temperatures between one and five degrees below zero, says Linne Rehn.

But no beautiful winter landscape is to be expected.

As early as tomorrow, Sunday, it will change.

- Plus, mild and overcast so much will probably thaw away.

Linnea Rehn raises a warning finger even in rain because the roads can keep minus degrees and then the cold of the precipitation that freezes and gives slippery road conditions.

Such ice skating is expected in both southern Svealand and northern Götaland.

WEATHER: So the new warnings will help you make better decisions Photo: SVT