"Wore a frank and businesslike character": how the telephone conversation between Putin and Biden went

The telephone conversation between Vladimir Putin and Joe Biden was frank and businesslike and was useful to both parties, the Kremlin said. The main topic of the conversation was the question of launching negotiations on ensuring Russia's security. Moscow expects that their result will be the provision of guarantees that exclude NATO's advance to the east and the deployment of offensive weapons in the immediate vicinity of the borders of the Russian Federation. 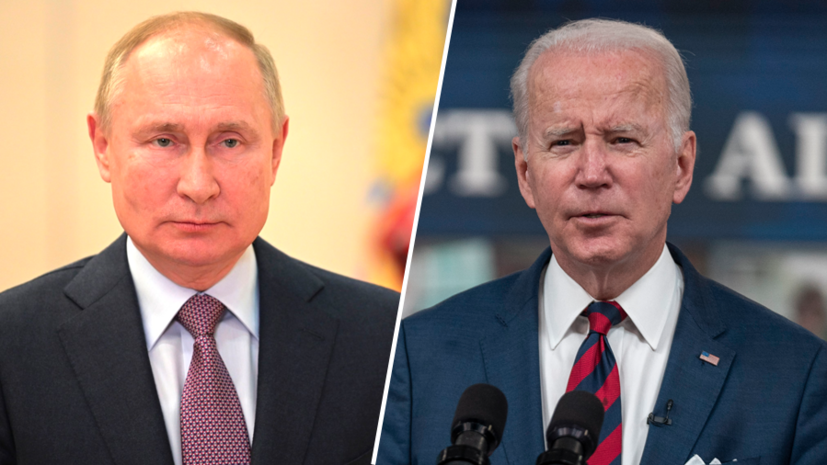 Russian and US Presidents Vladimir Putin and Joe Biden had a telephone conversation.

According to the Kremlin press service, the main topic of the dialogue was the issue of providing Russia with legal guarantees for ensuring security and the launch of negotiations on this topic, which the heads of state agreed on during a teleconference on December 7.

Thus, Vladimir Putin explained to his colleague the principled approaches underlying the draft treaty between Moscow and Washington and the agreement between the Russian Federation and NATO countries.

Both documents were sent to Western partners on December 15.

“It was emphasized that the result of joint work should be solid legal guarantees that exclude NATO's advance to the east and the deployment of threatening weapons systems in the immediate vicinity of Russian borders.

It was emphasized that the security of each country can be ensured only on the basis of strict adherence to the principle of the indivisibility of security, ”the message says.

The interlocutors expressed their mutual readiness for a serious and meaningful dialogue on the designated issues, the Kremlin noted.

The leaders also confirmed that the corresponding negotiations will be held in Geneva on January 9-10, January 12 - in Brussels within the framework of the Russia-NATO Council, and discussions in the OSCE are scheduled for January 13.

“The presidents agreed to keep under personal control the course of discussions on the above-mentioned negotiation tracks, and especially in a bilateral format with an eye to the earliest possible achievement of concrete results,” the Kremlin stressed.

At the same time, Biden pointed out that the Russian Federation and the United States have a special responsibility for ensuring stability in Europe and the world as a whole.

In addition, as the Kremlin added, the American leader assured that Washington "has no intentions to deploy offensive strike weapons on the territory of Ukraine."

In turn, Putin gave an exhaustive answer on the topic of Washington's possible adoption of "large-scale" anti-Russian sanctions in the event of an escalation of the situation around Ukraine: "In particular, it is said that this would be a serious mistake, in fact, threatening a complete rupture of Russian-American relations."

“In general, the conversation was frank and businesslike and, of course, was useful to both parties.

It was agreed to continue regular contacts at the highest level, ”the Kremlin concluded.

According to the aide to the President of the Russian Federation Yuri Ushakov, Moscow is pleased with the contact, the direction of which "was quite constructive."

“But I would like to emphasize that this was not some purely New Year's Eve conversation, some Christmas-time gatherings.

I would say that a truly important political action took place exactly one day before the New Year, ”he said.

Also on russian.rt.com Second in a month: Putin and Biden will have a telephone conversation in the late evening of December 30

According to him, during the dialogue, the leaders of the two countries touched upon all the main topics, but in general the conversation was devoted to security issues.

Ushakov explained that the Russian president indicated to his American counterpart that the main thing for Moscow is to achieve a result on the issue of ensuring the country's guaranteed security: "The US President, in principle, agreed with this point of view and reacted quite logically and quite seriously."

"Our president emphasized that in this situation - quite difficult - we will behave the way the United States would behave if offensive weapons were deployed near American borders," said the aide to the President of the Russian Federation.

According to him, Putin "made several visits" so that "this key idea reached Biden."

Ushakov also noted that the American side made an emphasis on "the unacceptability of the movement of Russian troops along the Ukrainian border."

He added that the presidents agreed to continue the dialogue after the New Year.

If not, then at some other time, but the main thing is that it was agreed to maintain contact on this score between the presidents, ”Ushakov said.

As follows from the statement of the White House press secretary Jen Psaki, Joe Biden, during a conversation with Vladimir Putin, called on Russia to de-escalate tensions with Ukraine.

President Biden reiterated that significant progress in these negotiations can only be achieved through de-escalation, not escalation, ”the statement said.

In turn, a senior US administration official stressed that the tone of the conversation between the two presidents was "serious and meaningful."

“President Joe Biden has outlined two paths, two aspects of the US approach, which depend on Russian actions in the period ahead.

The first is the path of diplomacy leading to de-escalation of the situation.

The other path is more focused on deterrence, including serious costs and consequences if Russia chooses to continue

invasion of Ukraine, ”he said.

The American official also stressed that Putin and Biden have agreed on the sequence of upcoming security talks in January.

“Both leaders acknowledged that there are likely to be areas where we can make meaningful progress and areas where agreement may not be possible.

The upcoming negotiations will more clearly define the contours of both of these categories.

This is what diplomacy is for, this is what negotiations are for, ”he said.