Interpretation of "Xi Jinping's 2021" Series No. 8 Xi Jinping's plan for the future   Xinhua Net Zhang Ruiqi   [Study is in progress] In 2021, our party will celebrate its centenary in China, and the two centenary goals of struggle will meet in history. In 2021, the world, a century of change and the epidemic of the century are intertwined, and mankind is experiencing multiple crises that are 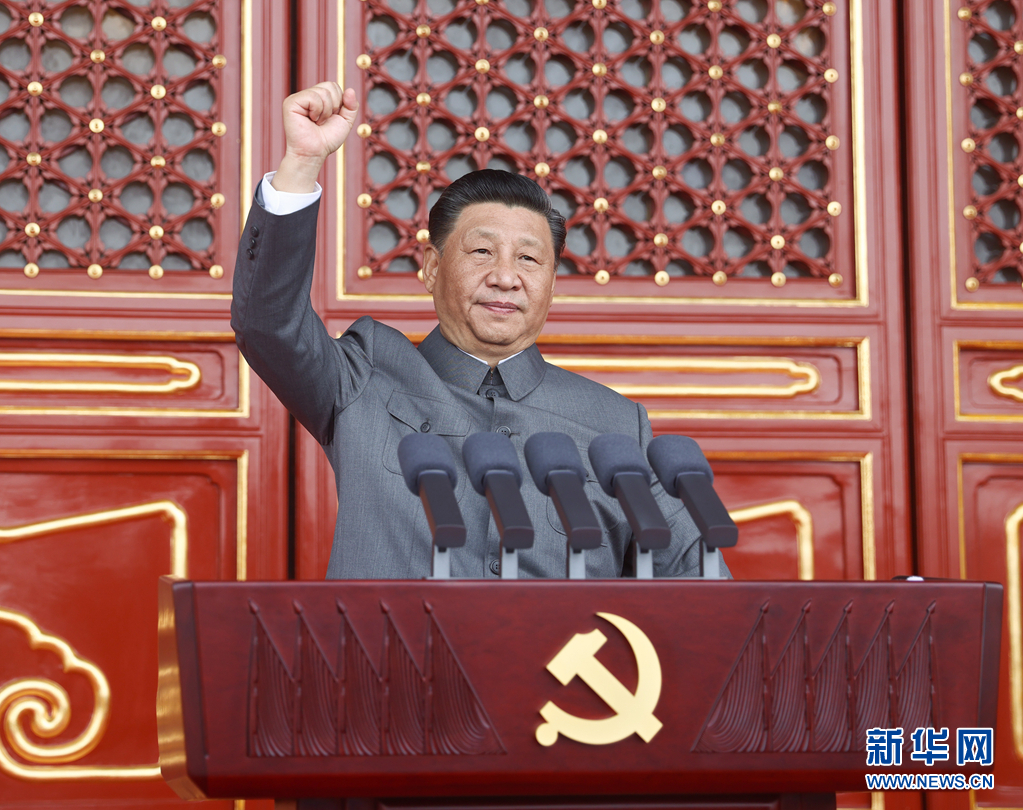 Xi Jinping's plan for the future

[Study is in progress] In 2021, our party will celebrate its centenary in China, and the two centenary goals of struggle will meet in history.

In 2021, the world, a century of change and the epidemic of the century are intertwined, and mankind is experiencing multiple crises that are rare in history.

In 2021, the tasks and challenges facing the Chinese people will be even more arduous.

This year, the Party Central Committee with Comrade Xi Jinping at the core took charge of the "Four Greats" and led the Chinese people to take a new look and create new brilliance in the first year of building a socialist modern country in an all-round way.

This is a historical year worth remembering——

The telephoto of the times is aimed at the land of China, setting many unforgettable moments: there is a declaration of poverty alleviation that shines through the annals of history, there is a far-reaching "100-year summary", there is a great anti-epidemic fight against the people supreme, and a sincere beckoning that spans thousands of miles...

This is the beginning year for the future-

The "14th Five-Year Plan" has been implemented, and the comprehensive construction of a modern socialist country has embarked on a new journey. Under the leadership of the Party Central Committee with Comrade Xi Jinping at the core, China has made strides towards the second century.

Standing on the new space-time coordinates, Xi Jinping is planning the layout of the future.

On July 1, 2021, the celebration of the 100th anniversary of the founding of the Communist Party of China was grandly held at Tiananmen Square in Beijing.

Xi Jinping, General Secretary of the CPC Central Committee, President of the State, and Chairman of the Central Military Commission delivered an important speech.

Towards the future, forging a stronger party

On July 1, 2021, at the celebration of the 100th anniversary of the founding of the Communist Party of China, General Secretary Xi Jinping solemnly declared: "The realization of the great rejuvenation of the Chinese nation has entered an irreversible historical process!"

This "irreversible" weighs more than a thousand times, and is full of confidence.

Facing the future, how to draw a more ambitious picture of revival?

The centuries-old struggle of the party reflects a clear answer: a great cause must be led by a strong party.

To ensure that the party will always become the core of strong leadership in the historical process of upholding and developing socialism with Chinese characteristics in the new era, Xi Jinping has far-reaching plans.

In the future-oriented layout, Xi Jinping attaches great importance to the summary and review of the party’s historical experience: from mobilizing the entire party to carry out party history learning and education, awarding the "July 1st Medal", issuing important "July 1st" speeches, and first mentioning Explaining the great party-building spirit, drafting the "Resolution of the Central Committee of the Communist Party of China on the Major Achievements and Historical Experience of the Party’s Centennial Struggle", and all aspects of the strategic layout are to enhance the party’s historical consciousness and historical self-confidence, and to continuously enhance the party’s creativity, cohesion, and cohesion. Combat effectiveness, forge ahead in a new journey and a new era of meritorious service, provides direction guidance, revealing Xi Jinping's far-reaching strategic considerations of "learning from history and creating the future."

Standing at a new historical starting point and continuing to strengthen skills can we live up to new missions; only with the courage to revolutionize ourselves can we achieve a new leap.

Facing the future, Xi Jinping has put forward higher requirements for our party's ability and ability to govern and rejuvenate the country, and has made detailed and careful arrangements in all aspects to lay an incomparably solid foundation for China's stability and long-term development in the future.

This is after the visit, Xi Jinping led the party members and leading comrades to revisit the party oath.

Towards the future, far-reaching plans for the overall situation

At the beginning of this year, the TV series "Awakening Age" hit the air. This drama about the "super-burning history of entrepreneurship" a hundred years ago caused tears of countless netizens.

One group of hot reviews poked people’s hearts: "Is there a sequel to "Awakening Age"?" "Your current happy life is a sequel!"

From a new historical starting point, striding forward to building a socialist modern power in an all-round way is to write a "sequel" to the party's "super-burning history of entrepreneurship."

Under the leadership of the Party Central Committee with Comrade Xi Jinping at its core, the "14th Five-Year Plan" has a good start, new steps have been taken in reform and opening up, the level of social civilization has been improved, the construction of ecological civilization has achieved new progress, people's livelihood and well-being have reached a new level, and national governance Performance has been newly improved.

Not only must the country be prosperous and strong, but also the all-round development of people and the all-round progress of society.

To achieve the second centenary goal, realize the great rejuvenation of the Chinese nation, and continuously improve the people's living standards, we must unswervingly regard development as the party's top priority in governing and rejuvenating the country.

my country's socialist democracy is the most extensive, true and effective democracy that safeguards the fundamental interests of the people.

"Developing People's Democracy in the Whole Process" is a grand subject proposed by Xi Jinping. From voting on the decision to amend the National People's Congress Organic Law and the decision to amend the NPC's rules of procedure, to the requirements for election work, to better ensure that the people are the masters of the country... …Facing the future, Xi Jinping has made a solid plan to make better use of the superiority of the socialist political system with Chinese characteristics, and to consolidate and develop a lively, stable and united political situation.

Culture rejuvenates the country and prosperity, and the culture is strong and the nation is strong.

Xi Jinping emphasized that the socialist modern power we want to build must not only be strong materially, but also spiritually strong.

From emphasizing "activating the vitality of Chinese excellent traditional culture with the spirit of the times" to "using red resources well and inheriting the red genes", facing the future, Xi Jinping has a deeper cultural self-confidence and a strong spiritual force for national rejuvenation.

Only when the people live and work in peace and the society is stable and orderly can the country achieve long-term development.

From strengthening anti-monopoly, deepening the implementation of fair competition policies, to further reducing the burden of students' homework and out-of-school training in compulsory education, from deepening the reform of medical service prices, to advancing the national overall plan for basic pension insurance... Facing the future, focusing on the realization of human rights With comprehensive development and social stability and order, Xi Jinping continues to deepen the layout.

The construction of ecological civilization is related to the sustainable development of the country.

Xi Jinping vigorously advocated the concept of socialist ecological civilization and promoted the formation of a new pattern of harmonious development between man and nature.

From advancing the ecological protection and high-quality development of the Yellow River Basin, vigorously developing renewable energy, to advancing the construction of a natural protected area system with national parks as the main body, and accelerating the goal of carbon peaking and carbon neutrality... Facing the future, to promote the country For sustainable development, Xi Jinping has a long-term view.

Standing at a new historical starting point, Xi Jinping used a series of forward-looking and strategic deployments to make far-reaching plans for the overall situation and lead the Chinese people to march forward courageously towards the realization of the second centenary goal.

From December 8th to 10th, 2021, the Central Economic Work Conference will be held in Beijing.

Xi Jinping, General Secretary of the CPC Central Committee, President of the State, and Chairman of the Central Military Commission attended the meeting and delivered important speeches.

"Major changes unseen in a century" was selected as one of the top ten buzzwords of 2021.

China's development has long been closely connected with the world.

Datong has been the naive dream of the Chinese since ancient times.

Xi Jinping pointed out that it is necessary to coordinate the overall strategy of the great rejuvenation of the Chinese nation and the major changes in the world unseen in a century, based on the domestic and global perspective.

Coordinating the two overall situations is not just seeking resonance, but pursuing an open road.

The Chinese Communists are for the Duke, uphold the righteousness, and seek the ego.

The world is the same hot and cold.

Facing the future, Xi Jinping considered China’s responsibilities from the global perspective of promoting the sustainable development of human society, and put forward one after another "Chinese plan" for global governance:

In the face of hegemonism and unilateralism, Xi Jinping emphasized "true multilateralism", advocated the use of multilateralism to deal with international issues, and vigorously promoted the common values ​​of peace, development, fairness, justice, democracy, and freedom for all mankind.

Facing the global impact of the epidemic of the century, Xi Jinping called on all countries to take the road of solidarity and cooperation, and work hand in hand to overcome the difficulties together.

In the face of global climate change, Xi Jinping calls on all countries to jointly build a community of life on earth, a community of global development and destiny, propose China's carbon peak and carbon neutral goals, and formulate relevant action plans to inject strong impetus into strengthening global environmental governance.

Human beings are a whole, and the earth is a home.

Only when human beings go hand in hand can the world be better.

China has always stood firmly on the right side of history and the side of human progress, firmly grasped the trend of the times and the general trend of the world, and followed the human right path of unity and cooperation.

The turbulent 2021 is about to pass, and another year spring is approaching.

There is no end to the journey. In the future, China will become more energetic and vigorous; the world will continue to move towards unity, inclusiveness, harmony and beauty because of the "China Plan".