Stabilize the basics of agriculture and do a good job in the work of "agriculture, rural areas and farmers"——Viewing the key tasks of "agriculture, rural areas and farmers" in 2022 from the Central Rural Work Conference   The Central Rural Work Conference was held in Beijing from the 25th to the 26th. Prior to the meeting, Xi Jinping, General Secretary of the CPC Central Committee, President of 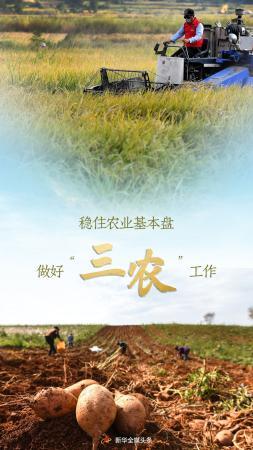 The Central Rural Work Conference was held in Beijing from the 25th to the 26th.

Since the beginning of this year, agricultural production has maintained steady progress, the results of poverty alleviation have been consolidated and expanded, and solid steps have been taken to comprehensively promote rural revitalization.

2022 is the year of the party’s 20th National Congress and a crucial year during the "14th Five-Year Plan" period. It is of special significance to stabilize the basic agricultural market and do a good job in the "three rural" work.

"The Chinese people's rice bowl must be firmly held in their own hands at all times, and the rice bowl is mainly filled with Chinese grain." "To ensure food security, everyone is responsible, and the party and the government must be responsible for real results," General Secretary Xi Jinping emphasized.

The people are the foundation of the country, and the valley is the life of the people.

The food issue must be calculated not only as an "economic account", but also as a "political account."

This year, my country’s grain production has enjoyed a bumper harvest, and the output has remained above 1.3 trillion catties, which has played an important role in opening up a new situation, responding to the situation, and stabilizing the overall situation.

However, we must also be aware that the current demand for grain in my country is growing rigidly, and the constraints on resources and the environment are becoming increasingly tight. It is increasingly difficult to increase the area of ​​grain and increase production.

The global new crown pneumonia epidemic continues to spread, and the impact of climate change is increasing, making it more difficult to ensure the stability of the food supply chain.

The meeting pointed out that we must do our best to do a good job in grain production and the supply of important agricultural products, stabilize the grain area, vigorously expand the production of soybeans and oilseeds, and ensure that the grain output in 2022 stabilizes at more than 1.3 trillion catties.

Published by Xinhua News Agency (photo by the moon also)

Ensuring the supply of primary products is a major strategic issue.

In the "Fourteenth Five-Year Plan for Promoting Agricultural and Rural Modernization" recently released, it is clear that "improving the supply of important agricultural products such as grain" is one of the key tasks.

"The clockwork of grain production must be tightened and tightened, and the work must be implemented and practical." Tang Renjian, director of the Central Agricultural Office and minister of the Ministry of Agriculture and Rural Affairs, said that next year, the improvement of comprehensive agricultural production capacity must be put in a more prominent position. , Continue to tap the potential for increasing production to ensure that the Chinese people’s jobs are firmly in their hands at all times.

Ye Xingqing, director of the Rural Economic Research Department of the Development Research Center of the State Council, said that a good grasp of food production will play an important role in stabilizing the overall economic and social development next year and responding to risks and challenges.

At the same time, it is necessary to speed up the construction of a mechanism for guaranteeing farmers' income from growing grain, so that farmers can profitably grow grain.

In the wheat field in the nine branch field of the farm in the Huangfan District of Henan Province, the farmer operates a harvester to harvest wheat (photographed by drone, taken on June 6th).

In recent years, my country’s “vegetable basket” products have generally achieved stable production and supply, but there are also problems with large fluctuations in vegetable prices and meat prices in some areas.

The meeting emphasized that the mayor’s responsibility system of the “vegetable basket” should be strengthened to stabilize pig production and ensure the effective supply of livestock, poultry, aquatic products and vegetables.

On December 2, staff were sorting vegetables in the trading floor of the Changde International Agricultural Products Trading Center.

"The requirements for arable land protection must be very clear. 1.8 billion acres of arable land must be well deserved. Farmland is farmland, and it must be fertile land." General Secretary Xi Jinping clearly requested.

Cultivated land is related to national food security and the sustainable development of the Chinese nation.

In recent years, the area of ​​arable land has decreased in some places, and in other places there have been fertile fields that do not grow food, and build farms or grow flowers and trees.

To ensure that grains are basically self-sufficient and food rations are absolutely safe, the most stringent farmland protection system must be fully implemented.

1.8 billion mu of arable land is an insurmountable red line.

At the same time, farmland is farmland and cannot be used for other purposes; farmland must be fertile land, not shoddy.

This is the vegetable base and residential style in Siping Village, Pingma Town, Tiandong County, Guangxi (photographed by drone, taken on November 4).

He said that all localities must strictly follow the relevant requirements of the central government, optimize and adjust the layout of rural land, and implement special protection of arable land, especially permanent basic farmland, to manage both "non-agriculturalization" and "non-grainization".

The relevant person in charge of the Ministry of Natural Resources said that for the problem of insufficient implementation of the balance of arable land in some places, a package of measures will be introduced to strengthen law enforcement and supervision.

Through the semi-annual rounds of remote sensing monitoring, we found clues to the problems, did not hesitate to illegally and substantively occupy the cultivated land, and strictly investigated and dealt with in accordance with the law.

Consolidate and expand the results of poverty alleviation

General Secretary Xi Jinping pointed out that the prerequisite for rural revitalization is to consolidate the results of poverty alleviation, and we must continue to pay close attention to it so that the lives of people who have escaped from poverty can be improved.

It is necessary to continue to promote the organic connection with the rural revitalization strategy to ensure that there is no large-scale return to poverty, and to effectively maintain and consolidate the great achievements of the fight against poverty.

The Central Rural Work Conference emphasized that it is necessary to consolidate and expand the achievements of poverty alleviation, increase support for key counties for rural revitalization, improve and implement monitoring and assistance mechanisms, strengthen industry and employment assistance, and ensure that there is no large-scale poverty return.

The Party Central Committee decided to establish a five-year transition period for counties that have been lifted out of poverty.

During the transition period, it is necessary to maintain the overall stability of the main assistance policies.

Tang Renjian pointed out that in the next step to consolidate and expand the achievements of poverty alleviation, we must focus on key groups and continuously improve the prevention and return of poverty monitoring and assistance mechanism; focus on key areas and strengthen the implementation of preferential support policies; focus on key tasks and increase industrial employment assistance.

Workers hang cucumber seedlings at the Lingshui Modern Agriculture Demonstration Base in Hainan Province on September 22.

Zhang Qi, Dean of the China Institute of Poverty Alleviation, Beijing Normal University, said: “Developing industries is the fundamental strategy for stabilizing poverty alleviation and the key to rural rejuvenation. The integrated development of the three industries will increase effective supply, and promote agriculture, prosperity and rural prosperity, and wealthy farmers."

On December 17, staff were packing roses in the rose base of the modern agricultural industrial park in Qufang, Juxian County, Shandong Province.

The Central Rural Work Conference proposed to strive to create a new situation for comprehensively promoting rural revitalization, and discussed the "Opinions of the Central Committee of the Communist Party of China and the State Council on Doing a Good Job in Comprehensively Promoting Rural Revitalization in 2022 (Discussion Draft)."

The meeting made arrangements for tasks such as vigorously developing industries that enrich the people in counties, solidly promoting rural construction, and strengthening and improving rural governance.

Li Guoxiang, a researcher at the Institute of Rural Development of the Chinese Academy of Social Sciences, said that rural construction is a basic condition for rural revitalization and an inevitable requirement.

Infrastructure and public services are inseparable to build beautiful and livable villages.

"Rurals have basic modern living conditions to retain talents." He said that we must plan well, and while focusing on protecting the rural landscape and traditional culture, we must accelerate the supply of shortcomings in water supply, transportation, energy use, and toileting. .

The meeting emphasized that it is necessary to strengthen and improve rural governance, give play to the role of rural grassroots party organizations as a fighting fortress, innovate an effective platform for the construction of rural spiritual civilization, properly resolve rural conflicts and disputes, and maintain rural social harmony and stability.

Participants at the meeting expressed that it is necessary to strengthen the construction of rural grassroots party organizations, give full play to the pioneering and exemplary role of rural party members, and improve the rural governance system that combines autonomy, rule of law, and rule of morality, so that rural society is full of vitality, harmony and order.