Several accidents in Christmas traffic: "Stop on the roads in Skåne"

Several traffic accidents have occurred on Christmas Eve around Skåne. Several of the accidents are said to be slip-related and now the police are warning of the surface on the Scanian roads. 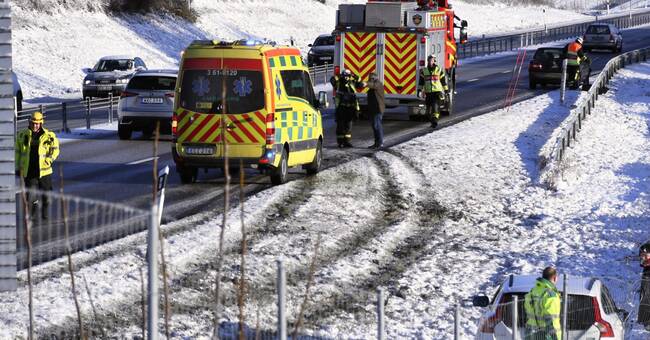 A single-vehicle accident has occurred on road E65 east of Svedala.

The alarm about the accident came in just after one o'clock on Christmas Eve.

Earlier in the day, another accident occurred on the E65 road.

Then a total of five cars must have been involved in an accident at the height of Marsvinsholm in the direction of Ystad.

At half past ten, two cars also collided on road 111 at the Allerum junction in Helsingborg.

On their website, the police write that it is very slippery in the area, but that anti-skid is underway.

- It is slippery on the roads around Skåne, we have had some deviations and other accidents due to the slipperiness, or at least where the slipperiness has played a role in the accident itself, says Jimmy Modin, the police spokesperson.

At ten o'clock, a car also drove in the ditch outside Landskrona on the E6 in a northerly direction, which affected traffic.

Shortly afterwards, another car drove into the ditch on Sträntevägen outside Sösdala.

So far, no serious injuries have occurred.

Now the police are urging all road users to adapt to the slippery road conditions.

- If you are going to go out and drive, we encourage people to get off in good time and keep a good distance from other motorists and above all adapt the speed to the ground, says Jimmy Modin.