Bad weather, the first of the three disturbances is about to reach Italy: rains from the afternoon

The weather will show no signs of improvement even in Santo Stefano (Sunday) when another disturbance will have the same direction as the previous one, however also bathing Campania and Sardinia 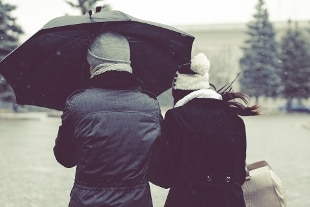 December 24, 2021 The perturbations - three of them - that will reach Italy during the holiday season starting today, Christmas Eve, are fast approaching. Atmospheric circulation over Italy is about to change. The winds begin to rotate from the southern quadrants, therefore not only milder but also humid and harbingers of a series of worsening - the experts explain - During the day the first rains will begin to wet Tuscany (where the yellow code was triggered), especially in the north and then also in eastern Liguria.

The vanguard of this first disturbed front will also extend to the North in the evening with light rains expected in Lombardy, Emilia Romagna and Veneto. Tomorrow, on Christmas day, the disturbance will come to the fore, affecting mainly the central regions with heavy rains, in the afternoon, on Tuscany, Lazio, Umbria, Marche and also in Liguria. Other rains will wet Emilia Romagna, almost absent in the rest of the North. The increase in temperatures will cause the snow to descend on the Apennines only above 1700 meters. It will be drier and also sunny in the South.

The weather will show no signs of improvement even in Santo Stefano (Sunday) when another disturbance will have the same direction as the previous one, however also bathing Campania and Sardinia. In the North it will rain moderately only in Emilia Romagna, there will be fog in Piedmont and a cloudy sky elsewhere.

Finally, a third disturbance will arrive at the beginning of next week and this time, in addition to being pushed by the Libeccio winds, it will be fed by colder air at high altitude.

Precipitation will affect almost all of Italy while the snow will return to fall weakly on the Alps starting from 1000-1200 meters, always at high altitudes in the Apennines.

During the holiday period, temperatures will tend to increase significantly, just think also in the South you can reach peaks of 18-20 C, as in Sardinia and Sicily, in the Center up to 15-16 C and up to 12 C in the Northeast.