SAS does not rule out that more departures must be canceled

SAS cancels nine flights from Arlanda on Wednesday due to high sickness absence. At the same time, long queues are noticeable at the airport - a problem that caused SAS travelers to miss departures this weekend. - The stress of employees and those who are going to travel vibrates in the air here at Arlanda, says SVT's reporter Erika Bjerström. 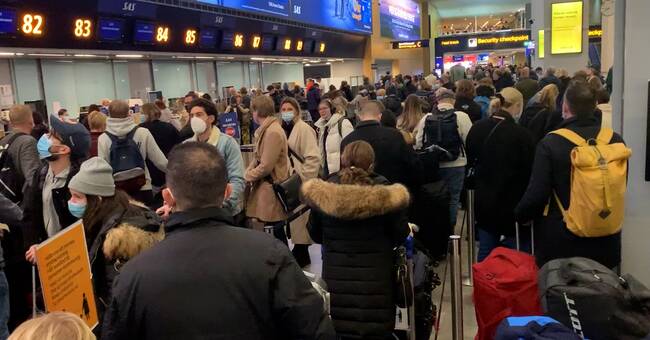 On Tuesday, the airline SAS canceled just over 30 flights in Sweden, Denmark and Norway.

On Wednesday, SAS will cancel nine departures from Arlanda, including to Paris, Oslo and Malmö.

- We have a general increase in sick leave with staff who are ill or have someone in the household who is ill, and that is the explanation, says Freja Annamatz, press manager at SAS.

SVT's reporter Erika Bjerström is on site at Arlanda on Wednesday.

- Our SAS flight to the USA was canceled last night without explanation.

I managed to rebook via Oslo after hours in a telephone queue.

The stress of employees and those who are going to travel really vibrates in the air.

SAS expects a peak of Christmas travelers on December 23, and two calmer travel days on Christmas Eve and Christmas Day.

On the second day, the company expects travel to pick up speed again.

- It is not excluded that there will be more canceled flights during the week, says Freja Annamatz.

The weekend's problems with long queues for check-in and security checks have continued at the same time.

With two days left until Christmas Eve, the queues were long in the morning.

Travelers tell SVT that they have arrived at the airport over three hours before departure, just as SAS recommended, but still they have been close to missing the flight.

This weekend, more than 100 SAS passengers missed their flights due to the queues.

Since then, only a few SAS passengers have missed their departures, according to the airline.

Camilla Bernström is going on a skiing holiday to the Alps with her family.

- After a pandemic that lasted almost two years, SAS should be better prepared.

If we miss the plane, we have no plane B.

At 03.30 on Wednesday night, Stefan Engström stood in a long queue to catch the flight to Luleå.

Stefan Engström was to fly from Arlanda to Luleå at 06 and was on site at 02.50 last night.

Even then, the queue for the security check was long and he had time with a little margin with the flight.

- The mess is that everyone forms a mega-long queue, which at the front divides into two.

Had we known that the inner small queue was domestic, everything would have been easier, but you stand in the queue that exists, says Stefan Engström.

According to the airport company Swedavia's forecast, Wednesday is the biggest travel day before Christmas.

In the morning, some queues were reported at check-in, but still what are called normal flows.

- But we know that there will be peaks during the day, generally it happens early morning and late afternoon.

Many travelers seem to have accepted the call to get well, says Peter Wärring at Swedavia's press service.

Has your flight been canceled?

Get in touch with us at tipsaoss@svt.se.