Draghi: "Very difficult years but Italy has been able to react. Omicron forces us to be very cautious"

"The pandemic and the economic crisis have affected especially the weakest" said the premier. "With the vaccines we saved lives and we left." And again: "The PNRR is not the recovery plan of this government. It is the plan for the whole country". Hence the hope that "light will be shed on the brutal assassination of Ambassador Luca Attanasio 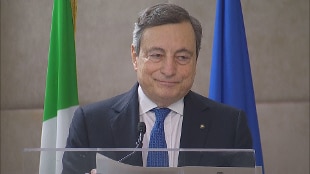 "The last few years have been very difficult for our country, as well as for the rest of the world. I am referring to the pandemic and the economic crisis, which have affected especially the weakest. But, in recent months, Italy has demonstrated, again once, to know how to react to the hardest crises with courage, determination, unity ".

Prime Minister Mario Draghi said this at the Conference of Ambassadors underway at the Farnesina.

Extreme caution is needed in the coming months

"The other priority is the management of the new phase of the health crisis. The vaccination campaign has allowed us to save lives and to reopen the economy, schools, places of our sociality. The arrival of the winter season and the spread of the Omicron variant, however, oblige us to be extremely cautious in managing the next few months ", added Draghi.

PNRR is not the plan of this government, but of the whole country

"The first challenge is the implementation of the NRP. Over the next five years, we have to invest 191.5 billion euros, in addition to other funds for a total of 235 billion euros. We are committed to reducing the gaps, accelerating the digital and ecological transition, improving education, healthcare and profoundly reforming the economy. The NRRR is not the government's recovery plan. It is the plan for the whole country. It is up to everyone - politicians, officials, entrepreneurs, social partners - contribute to the implementation quickly, efficiently, honestly ", continued the premier.

administered "Doctors, nurses, volunteers have administered over 106 million doses of the vaccine - an unprecedented effort in recent history", underlined the premier, adding that "the economy is recovering, thanks to the 'commitment of workers and entrepreneurs ".

"I want to leave you with an invitation to further enhance the role of women in diplomacy. Achieving effective gender equality is a goal that we must pursue everywhere - in the public and private sectors. I know that this Administration is becoming working in this sense ".

"It is essential to continue to commit ourselves so that all countries participate in the decarbonization process. This can proceed at different speeds, depending on the level of economic development of the individual states, but it must start as soon as possible everywhere" said Draghi, adding that "We must reaffirm the commitment, made at the G20 in Rome, to contain global warming by one and a half degrees and achieve climate neutrality around the middle of the century. The private sector can make a decisive contribution to this goal, as emerged from the Cop26 in Glasgow. And we must involve young people, the real protagonists of this change. The "Youth4Climate" conference in Milan was a model of participation in the negotiation processes and we want it to be repeated in the future ".

Let light be shed on the brutal murder of Attanasio

"I want to remember your colleague, Ambassador Luca Attanasio, brutally killed in the Democratic Republic of Congo with the carabiniere Vittorio Iacovacci and the driver Mustapha Milàmbo. They died for doing their job, in a difficult context, like the one in which many of you work. My heartfelt closeness goes to their loved ones "concluded Draghi. "I hope that their murder will finally be shed light on, and that all responsibilities are promptly ascertained".

"Italy has played a central role on the international scene. Government activity from the foreign policy point of view has been very intense, and for this I want to thank Minister Di Maio and all of you diplomats ", underlined the premier. "Under the Italian presidency, the G20 has made very significant progress in terms of global taxation, the distribution of vaccines, the fight against climate change". "Ours has been an effective multilateralism, which starts from the awareness that global phenomena require collective responses".

"I want to recall the Quirinal Treaty that we signed on November 26 and which marks a historic moment in relations between Italy and France. And the work on the" action plan "that we started with Germany and which will lead to greater political coordination between the two countries. Thanks to foreign policy, Italy is stronger, more influential, more credible ".

"Next year will see us fully involved in the management of major international crises. Italy has always been committed to facilitating democratic processes, promoting international cooperation, defending peace. For our country, the protection of human rights and fundamental freedoms is a top priority, "said Draghi. "In this regard, I want to remember the men and women who participate in civilian and military missions abroad with courage and a spirit of sacrifice. To all of them goes the most heartfelt thanks from the government and my staff. In Libya, we must continue with the our commitment to the full stabilization of the country, following the path traced by the United Nations. It is a process that must remain Libyan-led,that the international community must support and accompany ".

Condemning provocations in Ukraine and Belarus

"We are determined to reduce the increasingly evident conflicts on the eastern borders of Europe. I am referring to the tensions in Ukraine with Russia, and the crisis on the border between Poland and Belarus. We must be firm in condemning any provocation. . The use of migrants as an instrument of geopolitical pressure is unacceptable. At the same time, we must continue with the dialogue, bilaterally and multilaterally ".

"We need to accelerate towards a European defense, complementary to NATO. The strategic compass we are about to adopt is a first step, which must be followed by an even greater commitment in terms of military capabilities and financial resources . We must build a clearer and stronger foreign policy, equipped with effective decision-making mechanisms, starting from overcoming the principle of unanimity. Within these alliances, the relationship with the United States is and will remain central ".

Spirit of collaboration on challenges also in 2022

"Thanks to foreign policy, Italy is stronger, more influential, more credible. The same spirit of collaboration, the same determination, the same pride in representing Italy must also accompany us to our neighbor We are facing significant challenges, on which our credibility depends on citizens and our partners ", concluded Draghi, citing the implementation of the NRP first among the challenges.