Covid. The world is locked up against Omicron: from the UK plan C to the lockdown in the Netherlands

New restrictions and parties in the squares canceled. Countries arm themselves against the variant during the Christmas period. In Russia deaths are rising again while infections are falling 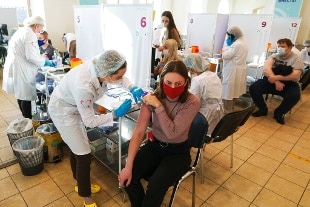 19 December 2021 The Omicron variant which is confirmed to be very fast in its propagation worries the world. Almost a month after its discovery in South Africa, the international scientific community still does not have sufficient data to fully assess its degree of danger. Certainly, there is its high degree of transmissibility, so much so that so far it has been reported in

doubling the infections every 1.5-3 days

. And many countries with high levels of population immunity are being affected at this stage, although WHO explained that it is unclear whether this is due to the virus's ability to evade the vaccine, its increased transmissibility, or a combination. of both.

Over a thousand deaths in Russia

Russia once again records over a thousand deaths a day due to Covid, while the decrease in cases continues. According to reports from the health authorities, 1023 people have died in the last 24 hours and there have been another 27,967 infections, confirming the gradual reduction in the number of daily infections that is being recorded in the last weeks after the peak between October and November.

According to the data released by the Russian health authorities, the highest number of cases were recorded in Moscow (3,013), St. Petersburg (1,995) and in the Moscow region (1,825). Since the start of the coronavirus pandemic, Russia has recorded 10,214,790 infected and 297,203 deaths. The Omicron variant has so far been detected in 25 cases, prompting the authorities to impose entry restrictions on those arriving from Hong Kong and some Southern African countries, while a 14-day quarantine has been introduced for those coming from South Africa and the Neighboring countries, the validity of PCR tests has been reduced from 72 to 48 hours.

The developers of the Russian Sputnik vaccine and the single-dose Sputnik Light vaccine said earlier this week that the two products are "highly effective" against the Omicron variant. The level of protection they would guarantee is estimated at 83%: even if lower than that ensured compared to the other variants, it is however, according to the Russians, from 4 to 7 times higher than foreign vaccines. In Russia, out of 144 million inhabitants, 70 million 800 thousand received the two doses of vaccine, equal to 58.2% of the vaccinable population.

WHO specifically mentioned the

, with over 90 thousand new infections from Covid for the third consecutive day, led by Omicron. The new variant reached 25 thousand cases, over 10 thousand in 24 hours, triple the previous day, with six new deaths (7 in total). According to the Financial Times, there is already a plan on Boris Johnson's desk that provides for a two-week national confinement, to be started after December 25: the so-called plan C, to be adopted to the extent that plan A (vaccines for all) and plan B (first restrictions) did not prove to be sufficient.

An extreme measure, almost a last resort, which has just taken place in Holland. Premier Mark Rutte made the announcement live on TV, arranging the

, at least until January 14th. A squeeze adopted with a "dark mood", admitted Rutte, stressing at the same time that Omicron is "spreading faster than we feared" and that we must "prevent the worst".

The advance of the variant in Europe has convinced some countries, such as Italy, Portugal, Greece and Ireland, to protect their borders by imposing an entry test for arrivals from the rest of the EU.

France, no party on the Champs-Elysée

France opted instead for the super Green pass (in which only the vaccine counts and not the tampons), while experts have suggested "significant restrictions" on New Year's Eve, "if necessary even a curfew". And in the capital the fireworks and the year-end concerts on the Champs-Elysée have been canceled.

From December 20, only those who have already received the third dose will be able to enter

. For others vaccinated or cured, a negative PCR swab not older than 72 hours is required. For the non-immunized, a ten-day quarantine.

has included Great Britain in the list of high-risk countries for the spread of Covid. The decision entails a series of restrictions on travel from midnight on Sunday. Among these, the Robert Koch Institute specifies, the obligation of a two-week quarantine for those arriving from the United Kingdom in Germany, even if vaccinated or recovered from Covid. Mandatory quarantine also for unvaccinated travelers from France and Denmark, Norway, Lebanon and Andorra.

Switzerland, restaurants and events only for vaccinated and cured

Only people who have been vaccinated or cured are allowed access to restaurants, cultural sites and sports and recreational facilities, as well as indoor events.

Until the end of January bars, pubs and restaurants will close at 8pm.

Shutters lowered for a month for theaters, cinemas and concert halls, along with amusement parks and museums.

In Quebec, the authorities asked to limit the number of guests to Christmas dinners to ten; secondary schools and universities will resume distance learning for at least one week once the holiday period has ended. From Monday, shops, bars, restaurants and theaters as well as gyms will have to reduce their reception capacity by 50%. -

Mandatory closing times have been restored for cafes, restaurants, cinemas and other public places while private meetings must be limited to four people.

In Los Angeles from today, all municipal employees - including police and firefighters - who have not obtained exemption for medical or religious reasons, will have to be vaccinated, otherwise they will be placed on administrative leave. Over 2,500 officers remain reluctant and have asked for an exemption which will be examined.

Beijing locks itself up for the Olympics

Beijing advises its residents not to leave the city during the holidays of the end of the year and the beginning of 2022 in order to avoid unnecessary risks against the coronavirus and its variants, protecting the February Winter Olympics.

The Chinese capital aims to "ensure the absence of local infections, the success of the organization of the Winter Games and the Paralympic Winter Games so that the public can spend joyful, peaceful and quiet holidays", clarified the municipality in a statement.