The "Al-Ain Rescue" team receives between 400 and 500 reports per month. The team was established in 2018 and consists of 25 members of young citizens, with the aim of saving those stranded in the desert, mountainous and wild areas, after they spotted many road-goers whose vehicles broke down and were stuck in the desert and mountains, due to the lack of 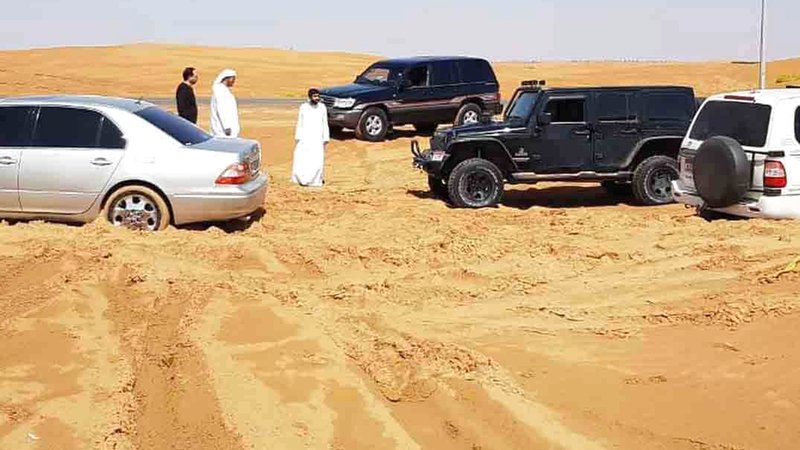 A camping trip pushes Youssef to found the team

The "Al-Ain Rescue" team receives between 400 and 500 reports per month.

The team was established in 2018 and consists of 25 members of young citizens, with the aim of rescuing those stranded in the desert, mountainous and wild areas, after they spotted many land-goers whose vehicles broke down and were stuck in the desert and mountains, because they did not have sufficient experience to act in such situations. The leader of the Al Ain Rescue Team said, Youssef Abdel Karim told Emirates Al-Youm that he, with his friends, decided to establish a volunteer team to provide assistance to the visitors of the wild and desert areas whose vehicles broke down, "after we observed that on more than one road trip the vehicles of those traveling on the road and mountainous areas were disrupted, and their inability to save their vehicles."

He continued, "We have started publishing contact numbers to reach the largest possible group of the public with simple capabilities, depending on the vehicles of the team members and the rescue tools they own.

Abdul Karim explained that the team consists of 25 members, all of whom are registered on the "Emirates Volunteers" platform, in addition to members under trial, and the number is subject to increase.

He pointed out that the team is undergoing training courses to increase its experience in dealing with all communications in various mountainous, wild and valley areas, where the number of communications the team receives ranges between 400 and 500 per month.

He added, "Pages have been created on social networking sites in the name of the team, and contact numbers have been published so that we can serve land-goers and those in need of assistance on the road."

He pointed out that “as soon as we receive the call for assistance, we ask the whistleblower to send his personal data, the website and an explanatory video of the vehicle with an explanation of the situation and the contact number, provided that upon receiving the data, the communication is transferred to all team members so that the situation is evaluated, and the case is received by any member of the team. To prepare the tools required for assistance, according to the nature of the communication.

Abdul Karim stated that after the case is completed and confirmed by the team, a full report is sent on the communication, how to deal with it and accomplish the task, pointing out that the team works on its own and does not receive any support from any party, as all equipment, tools and costs are at the expense of members Personal team and internal cooperation between team members, from supplying up to 25 vehicles equipped with the highest level of rescue equipment and using the best tools and equipment in the field.

He explained that sometimes certain equipment that is not available in the local market is imported to develop the team’s performance, as the team is equipped with security and safety tools, a safety jacket, fire extinguisher, first aid, and equipping vehicles with equipment such as towing tools, such as winches and trimmers, and tire repair tools, such as the tire filling machine and jake The electronic vehicle dedicated to lifting the vehicle, tire repair kits, mechanical and electrical tools such as bars, scrapers and fuses, in addition to equipping vehicles with water tanks and external lighting, and equipping vehicles with special aids for rugged areas, and by means of wireless communication devices for areas where there is no transmission.

He pointed out that one of the strangest reports that was received was from a land-goer located in a desert area between the sand dunes. It turned out that he did not know the location of his vehicle, which led to a search for it for a period exceeding three hours, and his vehicle was found in a completely far from description, and for this reason Location submission is requested upon receipt of reports for easy access to the reporter.

He explained that one of the most difficult situations that occurred during the rescue operations carried out by the team was receiving a report of two broken down vehicles in a remote desert area between the towering sand dunes. Towing (by winch + trim) from five in the afternoon until six in the morning until the two vehicles are connected to the nearest public road.

The leader of the Al Ain Rescue Team, Youssef Abdel Karim Mohamed Youssef, stated that one of the difficult challenges the team faced was the presence of holes in more than one tire, the breakdown of vehicle engines in remote desert areas, and difficulties in extracting stuck vehicles in muddy areas and swamps, where communications are dealt with with open arms, whatever they may be. Difficult and remote, and the team receives thanks and praise almost daily on social media, text messages and communication for the services it provides to the public.

• The team always undergoes training courses to increase its experience in dealing with all communications.