Virtual Summit. Xi Jinping to Vladimir Putin: "China and Russia support each other"

The Russian president and his Chinese counterpart have agreed that the agreed Aukus partnership between the US, UK and Australia undermines the nuclear balance 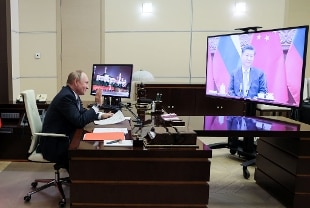 December 15, 2021The virtual summit between the Chinese president, Xi Jinping, and the Russian president, Vladimir Putin, ended after an hour and a half. The two discussed the issues of bilateral cooperation between China and Russia and touched upon issues on the international agenda.

President Xi Jinping, in the virtual summit with his counterpart Vladimir Putin, said that "China-Russia relations have passed tests of various storms and demonstrated new vitality".

The parties "support each other on issues of central interest and defend shared interests". Xi, according to the Beijing media, said he was ready for "new cooperation plans in various fields, for the long-lasting and high-quality development of bilateral ties".

Russian President Vladimir Putin and his Chinese counterpart, Xi Jinping, have agreed that the Aukus partnership agreed between the US, UK and Australia undermines the nuclear balance.

"Concern was expressed about the activity of the Americans in reconfiguring the current situation in the Asia-Pacific region. And in this regard, both on our part and on the Chinese side, a negative assessment was expressed on the creation of new alliances such as Indo-Pacific Quad and the American-Anglo-Australian union Aukus ", said the adviser to the Russian president, Yuri Ushakov, quoted by Ria Novosti.

Ushakov added that Putin and Xi, during their video conference interview, expressed their belief that Aukus "undermines the foundations of the nuclear non-proliferation regime" and increases tensions in the region.

The Russian president received the support of his Chinese colleague on the request presented to Washington for "legal guarantees of security" that the US should give to Russia, regarding the expansion of NATO to the east and the deployment of herds in Ukraine and neighboring countries to the Federation.

According to press reports by the Kremlin's diplomatic adviser Yuri Ushakov, Xi told Putin he understands Moscow's concerns and supported the Russian initiative.

"The president briefed his counterpart on the recent online meeting with US President Biden. The president noted that overall the conversation was informative and useful," Ushakov told reporters.

Putin and Xi Jinping also discussed Moscow's idea of ​​preparing a summit of the five permanent members of the UN Security Council and the need to hold it in 2022, Ushakov explained.

"They discussed the Russian idea of ​​preparing and holding a summit of the five permanent members of the United Nations Security Council," he commented.

"Both leaders consider this idea extremely useful, they will work on its implementation next year and it was agreed that through the foreign ministries of the two countries, permanent contacts will be maintained in this regard, as before," he added.