Under the flood of the unvaccinated, the reaction "does not see the peak" of the 5th wave

The surge in Covid cases seems to be subsiding but the "continuous surge" of patients is still being felt near Paris, where an intensive care unit sees a flood of unvaccinated patients ... and ... 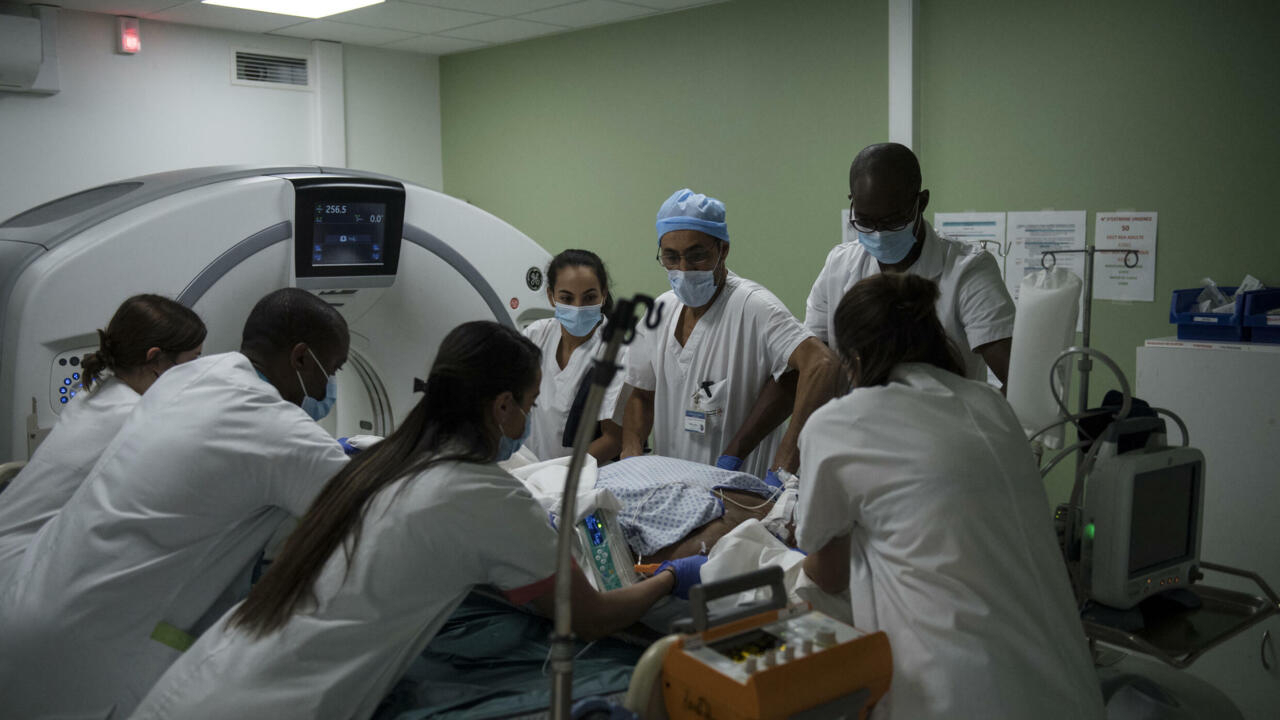 The breath as "blocked", despite the high flow oxygen in his nostrils, he knows he is "between life and death", for three days in a room of the André-Grégoire hospital in Montreuil (Seine-Saint- Denis).

“Unfortunately, no one has been vaccinated in my home,” said the 48-year-old man.

Neither his wife, who tested positive before him, nor his 16-year-old daughter and 13-year-old twins, who may have "brought the virus back from school."

Caught up by "this crap" virus, he now curses "this bullshit we hear on Youtube, the conspiracy theory. We have to erase all that, we have to wake up people a little."

And promises to go get vaccinated "if I get out of it".

His wife Fatima, who came to bring him "what he likes to eat" - today fish, spinach and yoghurt - is convinced: "He will be okay, I know it".

Certainly, "it is a patient as we see many, in good health and with very little history, who has an uncomplicated Covid infection for the moment".

But he has "great oxygen needs" and is already receiving maximum flow through his nasal cannula, she says.

If his condition were to deteriorate, "we would need to intubate him."

One example among many others.

This Tuesday morning, the 15 open beds of the intensive care unit are all occupied, including seven by Covid patients.

Only one is vaccinated "and it is the only one that we had out of the forty that we took in the last two months", sighs Dr. Vincent Das, head of a service called upon from all sides.

"The vaccine at the end of the street"

From neighboring emergencies, or other hospitals in the region, "there has been an influx of Covid patients for two weeks, we have to refuse them every day," he says.

Ile-de-France already has 545 in intensive care, out of the 2,792 treated throughout France.

At the national level, the government anticipates a number of patients in intensive care which "should exceed 3,000 very quickly and reach 4,000 around the holidays".

The contaminations may slow down, "we do not see the peak" of this fifth wave, to which are added "the other patients to be taken care of", underlines Dr. Das.

Like this young woman, who has just given birth to her third child and had to have her uterus removed urgently.

But also those treated for an ablation of the larynx, a pulmonary edema, a heart rhythm disorder, an epileptic attack ...

The routine for a service "very difficult psychologically and physically", still marked by the violence of the first wave which pushed to the departure "almost a quarter of the workforce" paramedics, explains health manager Myriam Chateauneuf.

The numerous applications received enabled him to "renew the team" without too much difficulty, and the flight of caregivers is less feared now because "the new ones have not experienced what the old ones have experienced, it is much more. attenuated ".

Moreover, staff leave has not been canceled for the moment, although the regional health agency (ARS) has reactivated the white plan.

"We try not to do it", concedes Dr Das, but the hospital "reserves this possibility".

Another sacrifice for nurse Sandy Jebahi, used to "going back to (her) rest" and who "doesn't even pay attention to fatigue".

But who is exasperated by these "all unvaccinated" patients.

"It annoys me because the vaccine is at the end of the street. Often they tell us that they did not have time, but how can we not have time after two years?", Scolds- she does.