Covid: United Kingdom towards "Plan B", In France 130 Omicron cases

In Germany, infections and weekly incidence decrease, deaths increase Covid-19, the US alarm: "Trips to Italy are at high risk" UK: Boris Johnson confirms first death caused by Omicron variant Great Britain, Johnson: "Omicron is an emergency. Third dose to all adults by the end of the year" Share December 14, 2021 The United Kingdom is preparing to move, amid the political brawl, to "plan B", or to a more restrictive level of anti-contagion measures. To bring the 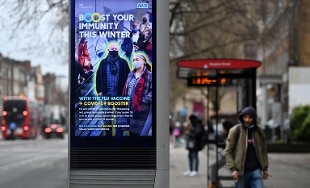 December 14, 2021 The United Kingdom is preparing to move, amid the political brawl, to "plan B", or to a more restrictive level of anti-contagion measures.

To bring the controversy to an incandescent level, with 80 conservative parliamentarians determined to vote against the crackdown, the announcement of the Secretary of Health, Sajid Javid, that the "vaccination pass" that should be passed could be granted not after two doses of vaccine but only after having also received the third. Today, however, "Plan B" should be approved, but only with the support of Labor.

The numbers of the epidemiological situation in the country are anything but reassuring. In the last seven days, 363,682 new cases of coronavirus have been recorded with a weekly increase of 9.9%. Also in the last week, 834 deaths were also recorded, with a decrease of 0.6%. Hospital admissions are particularly worrying, increasing by 5.1% again on a weekly basis. Currently, according to the latest available data, 7,372 Covid patients are hospitalized in British hospitals, of which 901 in need of respiratory support.

Meanwhile, according to estimates by the UK Health Security Agency (UKHSA) reported by the media, the Omicron variant would advance in the UK at the rate of 200,000 cases per day.

"We are just over 130 cases of the Omicron variant ascertained in France." This was stated in France Info by Gabriel Attal, spokesman for the government of Paris, specifying that at the moment about 10 thousand sequences are made a week, "which allows us to identify most of the cases in our territory". Attal then urged the French who will visit fragile people at Christmas to undergo a test in advance.

The number of Coronavirus infections in Germany decreases. The new infections reported to the Robert Koch Institut by the German regional authorities for the day yesterday were 30,823. A week ago there were 36,059. The weekly incidence per 100 thousand inhabitants also dropped and stood at 375 cases compared to 389.9 yesterday and 432.2 a week ago. On the other hand, deaths related to Covid-19 have increased: 473 today compared to 399 a week ago.

The health authorities of Guangzhou, the capital of Guangdong, have detected the second case in China of the Omicron variant of Covid-19, after the one made official yesterday in Tianjin. The new patient, 67, "returned from a foreign country on November 27," local media reported, according to which the man was isolated and hospitalized in hospitals dedicated to the pandemic. Gu Qing, director of the Tianjin Health Commission, said in an interview with the state-run network CCTV that the first Omicron case was detected in a sample imported from Europe. The person had normal temperature when they entered China and was transferred to a quarantine location, subsequently resulting in an asymptomatic case.

To prevent the further spread of Omicron, the Tianjin authorities have planned a special treatment area for infections of the variant with a special medical team.

So far, no other Omicron infections have been detected in other passengers who took the same flight as the infected person, according to authorities.