"Tonight is sport talking," exclaims Zakaria, a Moroccan supporter in Casablanca. Yet the Arab Football Cup quarter-final between Morocco and Algeria - won by this… 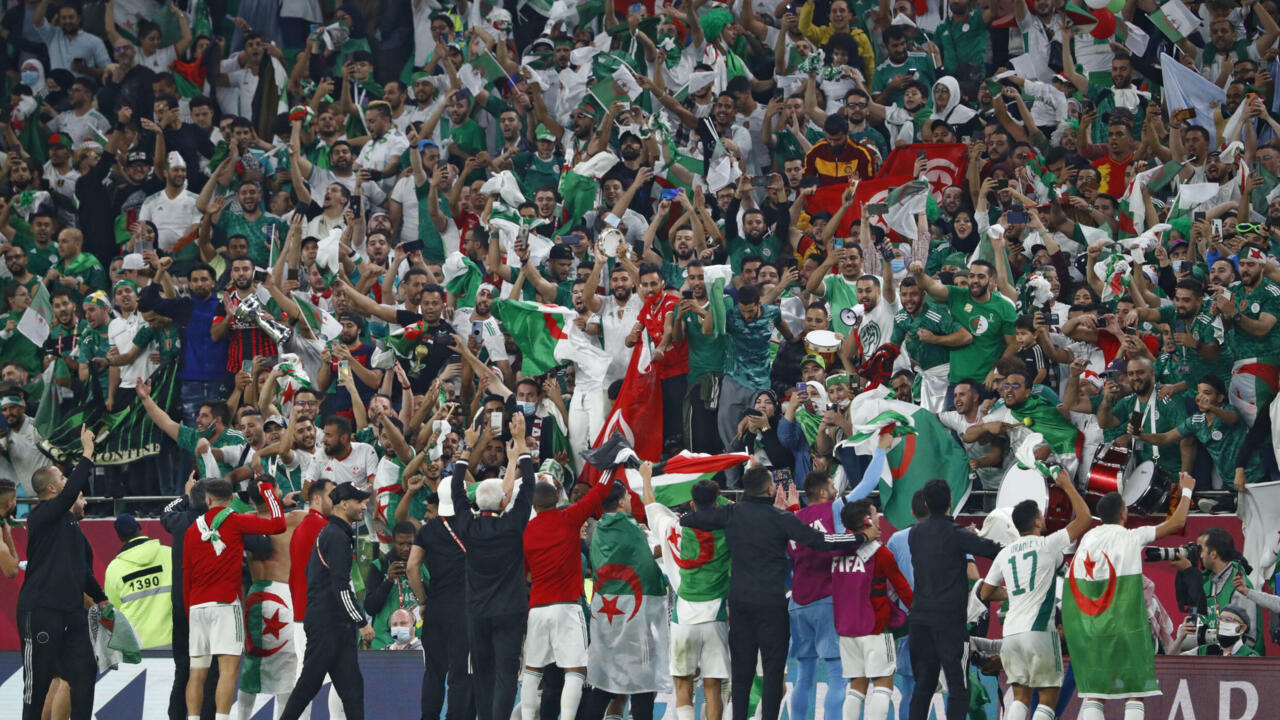 "Certainly, the rivalry hangs over this match but for once let's put politics aside," Zakaria, a 36-year-old Casaoui, told AFP, his eyes riveted on the screen in a cafe in the center of the metropolis. Moroccan.

His neighbors at the next table agree: "politics and football do not mix. We are here to see a good game", slice Brahim, who concedes however that "the tension is there".

"Oh Tebboune (the Algerian president) we are coming!", Chanted the fans with one voice when Mohamed Nahiri equalized for Morocco, in an electric atmosphere.

Moroccan supporters at Al-Thumama stadium in Doha during the Arab Cup quarter-final against Algeria on December 11, 2021 KARIM SAHIB AFP

Casablanca and Algiers quivered with excitement during this high-tension Maghreb derby, pitting a selection of the Atlas Lions against the Fennecs at the Al Thumama stadium in Doha.

Even if most of the teams playing this Arab Cup in Qatar - a mini-dress rehearsal for the 2022 World Cup - had not called on their best elements.

The passion was the same in Algiers.

"This match is not recommended for those with heart disease", told AFP an Algerian supporter following the match in a cafe in El Biar, on the heights of the capital.

Sitting next to him, his friend Riad displays unfailing serenity: "We are the strongest. We are going to beat Morocco".

This meeting - "final before the hour" as the press called it - necessarily had a political dimension in a tense regional context.

Algiers broke off diplomatic relations with Rabat at the end of August, accusing the Shereefian kingdom of "hostile actions" against the backdrop of a quarrel over the question of Western Sahara.

The players of the Algerian team during the anthems before the match against Morocco in the quarter-finals of the Arab Cup, on December 11, 2021 at the Al-Thumama stadium in Doha Khaled DESOUKI AFP

For decades, this dispute has pitted Morocco against the Saharawi separatists of the Polisario Front, supported by Algeria.

With a few exceptions, the Moroccan supporters interviewed repeated in chorus that the ball should remain on the lawn and not in the political arena.

"It's an important match, apart from political tensions, those who want to politicize the affair have understood nothing about football," said Omar, who lost nothing of the action in Doha.

On the field, there is only football, no other considerations, "added at the same time in Algiers, Youcef Abbas, a 46-year-old ex-footballer." Like music, football is played by artists ".

In recent days, in Morocco as in Algeria, the media have raised the sauce before this derby between the Lions and the Fennecs.

"Play football, not war", implored the Moroccan site Le360 Sport on Saturday in a mood ticket.

"A boiling hot Maghrebian derby which undoubtedly sets the two favorite teams of the competition against each other," predicted the public channel of TV 2M.

Unsurprisingly, social networks have ignited, with mocking posts but also messages of friendship.

"We will fight and love each other a lot at the final whistle," wrote a Moroccan net surfer before the match.

Despite the disappointment mixed with a little anger and spite among the Moroccan supporters, some inconsolable, at the end of an exciting match.

"I hope from the bottom of my heart that today's sports meeting will be an opportunity for some to look at each other with a heart open to fraternity and affection", pleaded on Facebook Karim Tabbou, figure of the movement pro-democracy of Hirak in Algeria.