Experts talk about the reform of the administrative system: to highlight the strengthening of the government's public service reform 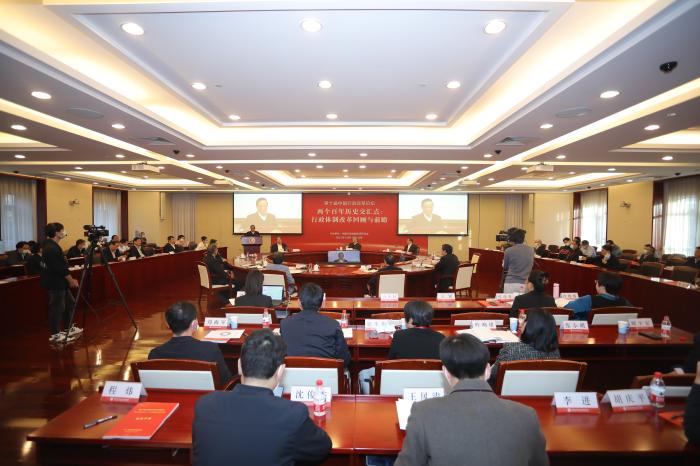 On December 11, the 10th China Administrative Reform Forum was held in Beijing.

Li Jinhua, vice chairman of the 11th National Committee of the Chinese People's Political Consultative Conference and chairman of the China Population Welfare Foundation, and Li Shulei, deputy head of the Central Party School (National School of Administration) in charge of daily work, attended the forum and delivered speeches.

Wei Liqun, founding chairman and director of the academic committee of the China Administrative System Reform Research Association, presided over the opening ceremony of the forum and a keynote speech.

In the guest speech session, Dong Keyong, vice chairman of the China Administrative System Reform Research Institute, professor of the School of Public Administration of Renmin University of China, and member of the expert group of the State Council to promote functional transformation and "decentralization, management and service" reform coordination group, said that "decentralization, management and service" is optimized The business environment is an important foundation for promoting high-quality development, as well as an important part of advancing the modernization of the national governance system and governance capabilities.

He mentioned that digitalization should be used as the starting point to further simplify government service procedures, focus on improving the quality of government business services, and build and upgrade a cross-regional, cross-industry, cross-business, and cross-functional national government service data platform. .

Dong Keyong said that we must persist in promoting reform, development, and innovation through opening up, continue to promote high-level opening up, continue to reduce the negative list of foreign business access, actively promote investment cooperation and multilateral trade on a global scale, and promote a higher level of Institutional openness.

Effectively protect the legitimate rights and interests of enterprises and build a pro-Qing political and business relationship.

Chi Fulin, vice president of the China Administrative System Reform Research Institute and president of the China (Hainan) Reform and Development Research Institute, believes that the goal of socialist modernization will be basically achieved by 2035, and new needs for government public service functions will be put forward to conform to this development trend. To deepen the reform of the administrative system, we must put the reform of strengthening government public services in a prominent position.

He said that in the new stage of development, the performance of public service functions presents new characteristics of the times: on the one hand, public services in the process of modernization are extended to professional fields, on the other hand, the wide application of technological innovation in the digital economy era in the field of public services is becoming more and more important. Reshape the existing administrative process and administrative structure.

Zhang Shucun, vice chairman of the Chinese Society for Administrative System Reform, Counselor of the Shandong Provincial Government, and former dean of the Shandong Academy of Social Sciences, said that the most urgent need for promoting the modernization of national governance and realizing the modernization, digitization, and intelligence of the governance system and governance capabilities is to give full play to them. The scientific and technological support function of cutting-edge digital technology.

He said that it is necessary to vigorously use digital technology to improve the level of governance modernization, to further raise awareness, improve the position, do a good job in top-level design, coordinate the construction of digital infrastructure, further improve the use of digital technology to support governance modernization institutional mechanisms, and strengthen system construction , The establishment of laws and regulations, etc. In addition, the technical and think tank communities should join hands to strengthen cooperation with the grassroots.