"Compensation for losses": how parliamentarians propose to fight against those calling for anti-Russian sanctions

A bill was introduced to the State Duma on amendments to the Arbitration Procedure Code, which makes it possible to file claims in Russian arbitration courts against foreign companies and citizens who contributed to the introduction of anti-Russian sanctions. The authors of the bill were deputies from the Liberal Democratic Party. Earlier, opposition figures such as Alexei Navalny, Mikhail Khodorkovsky, Vladimir Kara-Murza and others called for the introduction of anti-Russian sanctions. 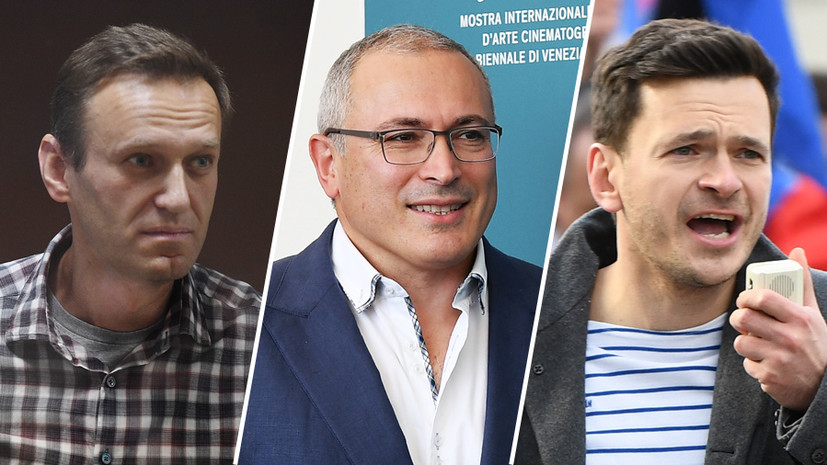 The LDPR proposes to supplement Part 1 of Art.

248 of the APC ("Exclusive competence of arbitration courts in the Russian Federation in disputes involving persons against whom restrictive measures have been introduced"), namely, to establish the right to file claims with Russian arbitration courts against foreign organizations and citizens who supported the introduction of restrictive measures.

The document is posted in the database for ensuring the activities of the parliament.

"The bill will provide a real opportunity to compensate for losses and eliminate other adverse consequences that Russian citizens and legal entities are suffering as a result of restrictive measures," the authors of the initiative believe.

A treasure trove of sanctions ideas

A striking example of such a call was the participation of Alexei Navalny, Ilya Yashin, Vladimir Milov and Vladimir Kara-Murza in a special meeting of the Foreign Affairs Committee of the European Parliament in November 2020.

In a conversation with deputies, the opposition called on the EU to introduce new anti-Russian sanctions against some members of the Russian business elite.

Navalny then convinced the European Union that such restrictive measures would be approved by the majority of Russians.

Also on russian.rt.com "There is only one explanation - an attempt to restrain development": Putin - on sanctions in the scientific field

"Russian oligarchs, not only old, but also new ... should be the target of sanctions," the opposition leader stressed.

The ex-chairman of the council of deputies of the Krasnoselsky district, Ilya Yashin, like Navalny, appealed to the MEPs with a proposal to replace the restrictive measures against Russia with sanctions against the circle of the president of the country and the head of state personally.

“I think this is a very good principle that should form the basis of relations between Russia and the European community,” Yashin said at the time.

Vladimir Kara-Murza supported his comrades-in-arms, but stressed that their proposal was not a request to interfere in the internal affairs of Russia.

“We are not asking the EU to interfere in the political development of our country.

We expect you to be true to your values ​​and stop allowing corrupt officials and oligarchs to steal from our people in Russia and enjoy loot in EU countries, ”said Kara-Murza.

This is not the first time that Navalny has approached the EU with sanctions initiatives.

In 2015, in an interview with the Financial Times, he called on the West to ban and freeze the assets of about a thousand Russian officials and businessmen.

“If Abramovich, Usmanov and their families cannot get into their residences in London or Switzerland, everything will be different,” Navalny said.

In January 2015, a similar idea was promoted by the ex-head of Yukos Mikhail Khodorkovsky at the Rusijos Reality Check forum in Vilnius.

He spoke out against sectoral sanctions against Russia and suggested replacing them with "targeted sanctions against" loyal Putinists ", as well as security officials, bureaucrats and businessmen who have merged with the bureaucracy."

After Navalny was arrested in January 2021, his associate living in the UK, FBK * Executive Director Vladimir Ashurkov, published on Facebook a list of people against whom Western states were asked to impose sanctions.

The list was compiled by Navalny himself shortly before his return to Russia.

“For years Alexey and our team have been advocating individual sanctions against those guilty of violating human rights, the electoral system and law enforcement agencies in Russia, as well as corrupt officials and businessmen,” Ashurkov said in his post.

The FBK executive director also added that the threat of sanctions against these individuals could force the Russian authorities to release Navalny.

Soon after the arrest of Navalny, the European Parliament did introduce new sanctions against the heads of the Investigative Committee, the Federal Penitentiary Service and the National Guard.

Following the EU, the US imposed sanctions against Russia.

Several high-ranking officials, as well as a number of organizations, fell under the restrictions.

However, the release of Alexei Navalny, contrary to Ashurkov's assumptions, is still not being discussed.

The last time the head of the FBK called on foreign states to impose sanctions against Russian "oligarchs" in August 2021, while already in prison.

His column has been published in three European newspapers - The Guardian, Le Monde and Frankfurter Allgemeine Zeitung.

"Until individual sanctions are introduced against the oligarchs ... any anti-corruption rhetoric of the West will be perceived as a game and idle talk," Navalny wrote in the article.

Responsibility for what was said

Lawyer Ilya Remeslo commented to RT on the draft law of LDPR deputies on the protection of companies and persons subject to sanctions.

In his opinion, incitement of foreign states to introduce restrictive measures against Russia should be punished under the already existing Art.

275 of the Criminal Code of the Russian Federation (“High treason”), which provides for a maximum punishment of up to 20 years in prison.

“When a person provides consulting assistance to another state against the interests of Russia, then, in my opinion, it falls under the concept of“ treason ”.

Coming up with additional articles is to sign that the state cannot prove: these people are treason.

It is necessary to observe the existing laws and judge them according to the already existing articles, ”Crafts believes.

The Anti-Corruption Foundation is included in the register of NPOs performing the functions of a foreign agent, by decision of the Ministry of Justice of the Russian Federation dated 09.10.2019.