Ukraine, the work of diplomatic missions and the fight against cybercrime: what Putin and Biden discussed during the talks

The presidents of Russia and the United States held a lengthy conversation via a closed video link. During the dialogue, which lasted about two hours, the presidents discussed Ukrainian issues against the background of a lack of progress in the implementation of the Minsk agreements. The topics of cooperation in the field of cybersecurity and the work of the diplomatic missions of the two countries were also raised. The leaders stressed that, given their special responsibility for maintaining international security and stability, Moscow and Washington will continue dialogue and necessary contacts. 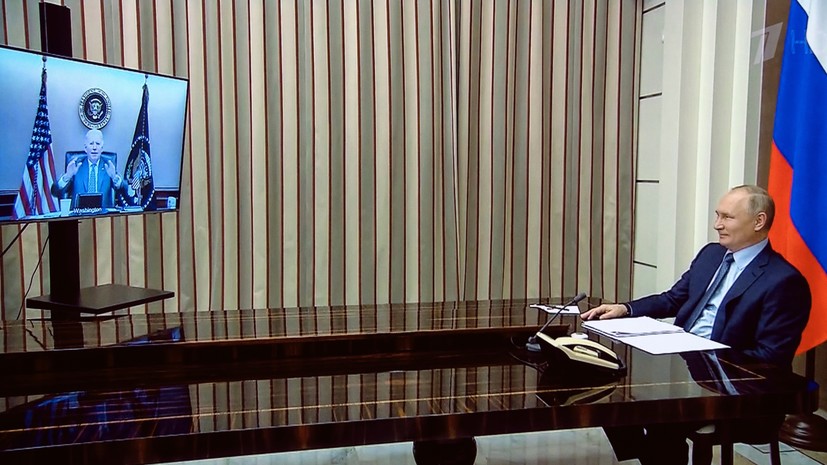 On Tuesday, December 7, the presidents of Russia and the United States held another round of negotiations - already the fifth since Joe Biden took office as head of state.

This time the conversation took place by video link in a tete-a-tete format and lasted a little over two hours.

According to the Kremlin, the conversation was frank and businesslike.

In particular, the presidents discussed the implementation of the results of the Geneva summit, which took place in June 2021.

"The importance of consistent implementation of the agreements reached at the highest level and the preservation of the" spirit of Geneva "when considering issues of bilateral relations and other problems arising between Russia and the United States was noted," the Kremlin said.

In addition, the leaders expressed the opinion that, given the special responsibility for maintaining international security and stability, which lies with Russia and the United States, the parties will continue the dialogue.

Ukrainian issues and the lack of progress in the implementation of the Minsk Agreements took a "predominant place" in the negotiations.

It is noted that during the conversation, Vladimir Putin illustrated with specific examples the “destructive line of Kiev”, which is aimed at dismantling both the Minsk agreements and the decisions reached in the “Normandy format”.

Biden responded by commenting on the allegedly "threatening" nature of the movement of Russian troops near the Ukrainian border.

He also spoke about possible sanctions that the United States and its allies would be ready to impose in case of further escalation.

Also on russian.rt.com Ducks of freedom: how the US is trying to convince European allies of Russia's imminent "invasion" of Ukraine

As reported in the Kremlin, commenting on these theses, Putin stressed that the responsibility should not be shifted to Moscow, since it is NATO that is making "dangerous attempts to conquer Ukrainian territory and building up its military potential" near the Russian borders.

Aide to the Russian president, Yuri Ushakov, later told reporters that Biden had told Putin that he intended to discuss Moscow's concerns with his allies.

Answering a clarifying question about the possibility of withdrawing Russian troops, Ushakov drew attention to the fact that these units are on their territory and do not threaten anyone.

The work of diplomatic missions and cybersecurity

During the conversation, the leaders also stated that cooperation between the two countries "is still in an unsatisfactory state."

This is manifested, in particular, in the work of diplomatic missions.

As Putin noted, all this is a consequence of the activity of the American authorities, which five years ago began to practice large-scale restrictions, bans and mass expulsions of Russian diplomats.

Moscow was forced to react to these steps in a similar way, the president explained.

"The Russian side proposed to nullify all the accumulated restrictions on the functioning of diplomatic missions, which could serve to normalize other aspects of bilateral relations," the Kremlin said in a statement.

Among other things, the presidents expressed their readiness to continue practical cooperation in the fight against cybercrime.

During the exchange of views on information security, they drew attention to the importance of an active dialogue on this topic.

Along with this, Putin and Biden discussed the state of affairs around the Joint Comprehensive Plan of Action on the Iranian nuclear program.

The Russian leader stressed the importance of the full implementation of the JCPOA within the initially agreed framework.

Commenting on the results of the negotiations, Yuri Ushakov noted that the leaders did not discuss the topics of energy, climate and the coronavirus pandemic.

From the statement of the American side following the meeting, it follows that Biden "expressed deep concern" to the United States and Washington's European allies about "Russia's escalation of forces around Ukraine."

"President Biden ... has made it clear that the United States and our allies will respond with decisive economic and other measures in the event of a military escalation," the White House said in a statement.

The American leader also traditionally spoke out in support of the "sovereignty and territorial integrity of Ukraine", called for de-escalation and a return to diplomacy.

In addition, the White House said that the presidents discussed a dialogue between the United States and Russia on strategic stability issues, and also held a separate dialogue on ransomware and discussed joint work on regional issues such as Iran.

We will remind, Putin and Biden for the first time held a personal meeting as heads of state on June 16 in Geneva.

The dialogue between the two presidents lasted 3.5 hours.

During the conversation, the leaders discussed a variety of issues, including strategic stability, cyber security, regional conflicts, trade relations and cooperation in the Arctic.

Summing up the results of the June meeting, the Russian leader noted that the conversation was held “in a principled manner”, but “there was no hostility at all”.

He called the conversation with Biden constructive.

Putin also added that on many points the sides' assessments differ, but during the conversation it was demonstrated "a desire to understand each other and look for ways to converge positions."

During the negotiations, the parties agreed to begin consultations of foreign ministries on diplomatic interaction, as well as consultations on cyber security and strategic stability.

The Ukrainian issue was raised at the June meeting, however, according to Putin, it was not discussed in detail.

The Russian leader then noted that Biden agreed with the statement that the Minsk agreements should be at the heart of the settlement in Donbass.

As the President of the Russian Federation emphasized, facilitating the implementation of these agreements is Russia's only obligation regarding Ukraine.

The next time the presidents held talks by telephone on July 9th.

During this conversation, they talked about issues of information security and the fight against cybercrime.

In addition, the leaders spoke about the situation in Syria with an emphasis on humanitarian aspects.