The New York Times: 5 Quick Notes on the Biden-Putin Call

The video conference that took place between US President Joe Biden and his Russian counterpart Vladimir Putin was necessary to defuse the Ukraine crisis, so did the two sides succeed in achieving that? 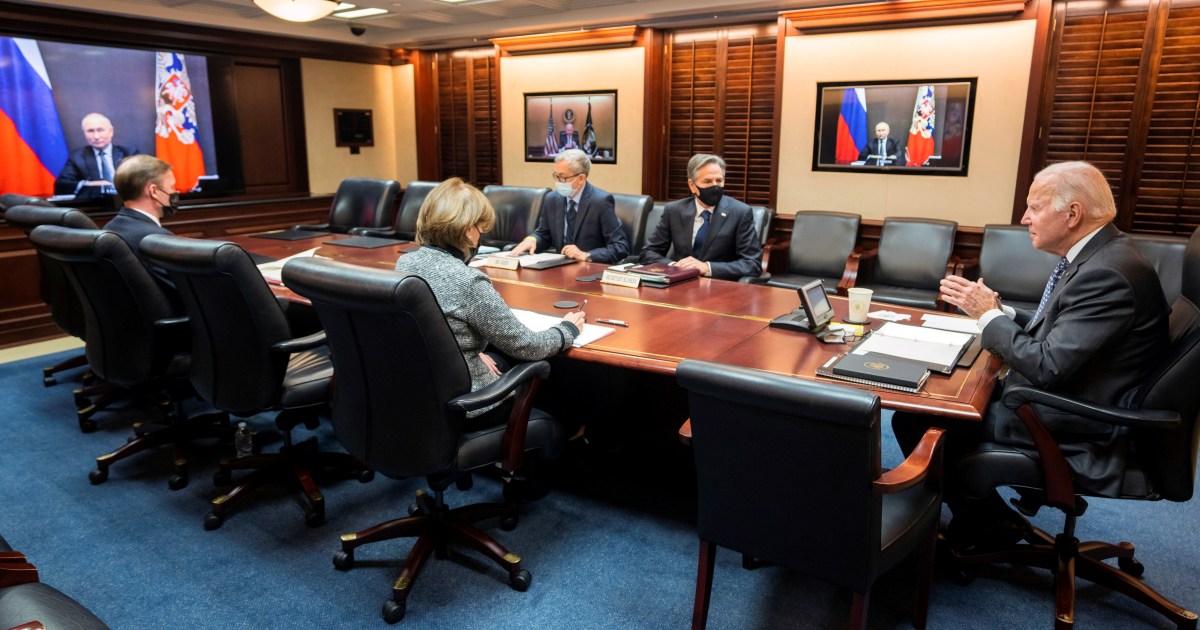 A report in the New York Times referred to the nearly two-hour video conference between US President Joe Biden and his Russian counterpart, Vladimir Putin, on Tuesday as an attempt to defuse a growing military crisis along the Ukrainian border;

Tens of thousands of Russian troops have massed in what US officials say could be a prelude to a full-scale invasion of Ukraine.

The report's author, Michael Crowley, described the meeting as one of the biggest foreign policy tests of the Biden presidency to date, and its consequences for the stability of Europe, the credibility of American threats, and the future of a country that the United States spent years trying to defend from Putin's aggression.

Crowley summarized the meeting in 5 notes:

The first: Ukraine's fate is still at stake.

The conference did not resolve the crisis along the Ukrainian border, and neither the Kremlin nor the White House reported substantive progress.

White House National Security Adviser Jake Sullivan said after the meeting that Mr. Biden offered Putin a choice between a diplomatic solution and the serious economic and political consequences that would follow Russia's invasion of Ukraine, but he did not say whether Mr. Putin had made any commitments.

Two: Putin does not budge.

It is unclear whether Biden's threats will deter the Russian president from invading Ukraine.

There is no indication that Putin was conciliatory.

The meeting was one of the biggest foreign policy tests of Biden's presidency to date, and its consequences for Europe's stability, the credibility of American threats, and the future of a country that the United States spent years trying to defend from Putin's aggression.

The newspaper cited the Kremlin's statement to the meeting in which Putin blamed the tensions on the West and said it was strengthening its military capacity in and around Ukraine.

He demanded legal guarantees that NATO would not expand eastward toward Russia's borders or deploy offensive weapons systems in Ukraine.

But US officials rejected Putin's analysis of the situation and said they would not make promises about possible NATO expansion.

The third: the main energy pipeline from Russia to Germany faces new risks.

The Biden administration and Congress have been at loggerheads over a pipeline that critics say is an unacceptable political and economic boon for Moscow, and is now in jeopardy.

Immediately after the meeting, he spoke by phone with the leaders of France, Germany, Italy and Britain, whose support US officials say will be crucial to deterring the Russian leader, who has sought for years to drive a wedge between America and its allies in the hope of weakening resistance to his actions and undermining NATO.

"We have experts from the Treasury, the State Department, and the National Security Council in daily contact with major capitals and with Brussels" to discuss punitive steps that could be taken jointly against Russia, Sullivan said.

Fifth: It's not personal.

There is little evidence of any personal animosity between Biden and Putin.

In a brief clip of the beginning of the meeting posted online by Russian state media, the two leaders appeared to exchange friendly greetings and Biden appeared to smile and wave to his Russian counterpart.

"There was a lot of give and take, there were no warnings, and it was a real discussion and it wasn't just rhetoric," Sullivan commented.