Handing over at the Chancellery between Scholz and Merkel. This morning you are sworn in before the deputies 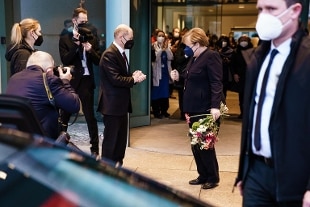 The 63-year-old was elected by the Bundestag with 395 votes and succeeds Angela Merkel, who led the country for 16 consecutive years and is now retiring from political life.

After taking an oath before the deputies, Scholz went to the Chancellery, where he was welcomed by Merkel for the handover.

"It will be a new beginning for our country. In any case I will do everything to work in this direction", said the new head of the German government, stressing that now "the challenge is to get out of the pandemic". For her part, Merkel asked Scholz to "work best for the interests of Germany". "Work for the good of our country, this is my wish, and I wish you good luck", he added. "It is an exciting and rewarding task, even challenging, but if we face it with joy, it is perhaps also one of the most beautiful tasks that can be done", continued Merkel, honored by Scholz with a bouquet of flowers. The new chancellor then thanked Merkel "for the work done in these wonderful 16 years" in which she had to overcome great challenges ".

Scholz, who leads a coalition with the Greens and the Fdp liberals, does not intend to waste time: on Thursday he will have his first commitments abroad, with trips first to Paris and then to Brussels. The first official visit will be in the French capital, where he will meet with President Emmanuel Macron. Then he will go to Brussels, where he will see the President of the European Commission, Ursula von der Leyen, and the President of the European Council, Charles Michel.

Numerous leaders congratulated him on the election. Among the first, the Chinese president, Xi Jinping, who in a message expressed his willingness to work together with Scholz to "strengthen mutual political trust and expand cooperation". Then, of course, the EU leaders: the president of the European Commission, Ursula von der Leyen, who in a tweet wished Scholz "a good start", adding that she looks forward to "continued trusting collaboration for a strong Europe" ; the president of the Parliament, David Sassoli, who, again in a tweet, states that "the European Parliament is looking forward to working with you"; the European Commissioner for Economy, Paolo Gentiloni, who wrote in a tweet: "Congratulations and best wishes to Olaf Scholz and his new government. "French President Emmanuel Macron welcomed Scholz's election as German Chancellor on Twitter and promised to" write the next chapter together. For the French, for the Germans, for the Europeans. "The Kremlin, through its spokesman Dmitri Peskov, said it hopes for" constructive relations "." We are committed to continuity, to establish constructive relations between President Putin and the new chancellor Peskov said, underlining that the hope for continuity also includes the Nord Stream 2 gas pipeline project.President Putin sent a telegram to Merkel thanking her for her cooperation over the past 16 years and for her readiness for "mutually respectful dialogue". "We have been in constant contact and have tried to find ways out of even the most difficult situations," Putin wrote.