During the summit with the head of the Kremlin, the head of the White House would have announced serious economic consequences in the event of a Russian intervention. Putin: "We are concerned about Ukraine's potential accession to NATO" 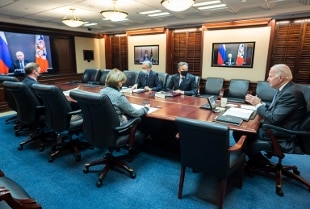 08 December 2021If the head of the Kremlin attacks Ukraine, "sanctions never seen before" will be triggered: this is the warning launched by the American president the day after the summit with the Russian president. Biden also ruled out a military response with the use of American troops. During the summit with Putin, the head of the White House would have announced serious economic consequences in the event of a Russian intervention. On the other hand, Putin said he was worried about NATO's expansionism towards Kiev: "Passively observing the developments of Ukraine's possible accession to NATO would be criminal behavior", so the Kremlin chief commented on the results of the interview with Biden. . "On the other hand, NATO is conducting an openly confrontational policy towards Russia".

Biden: "Lower the temperature on the Eastern front"

"We hope by Friday that we will be able to announce that we will have meetings at the highest level, with at least 4 of the main NATO allies and Russia to discuss Moscow's concerns about the enlargement of the Alliance". This was stated by President Joe Biden, following the video conference with Vladimir Putin, preceded and followed by a telephone conversation with the leaders of France, Germany, the United Kingdom and Italy. Future meetings should serve to "lower the temperature along the eastern front" between Russia and Ukraine.

The head of the Kremlin called a "provocation" the question of those who asked him at the press conference about the possibility of a Russian invasion of Ukraine: "Moscow - said the Russian president -" would act only for defensive purposes: of course we are worried of the potential accession of Ukraine to NATO because this would result in military bases and troops placed on Ukrainian territory "." Russia has a peaceful foreign policy - concluded Putin - but has the right to defend its security ".

Accelerating the aggression against Ukraine would be a "strategic mistake" for Moscow: so the British Foreign Minister, Liz Truss, before meeting with her Ukrainian counterpart to offer Kiev "closer strategic cooperation". Russia - Truss reiterated - must "respect the sovereignty and territorial integrity of Ukraine".

The comment by France, which warned Russia on the "serious strategic consequences" that an aggression against Ukraine would have, when Moscow is accused of amassing troops on the border with the country, is of similar tenor.

"We are following the situation around Ukraine with the utmost attention", said the French foreign minister, Jean-Yves Le Drian, "the heads of state and government have expressed their determination to ensure that its sovereignty is respected".

The President of the EU Council, Charles Michel: "If Russia violates Ukrainian sovereignty it will pay a heavy price, but I continue to believe in dialogue with Moscow".

According to Michel "Ukraine is a strategically very important region".