"After the contacts of representatives take place": Peskov spoke about the possibility of a new conversation between Putin and Biden

A new round of talks between Vladimir Putin and Joe Biden may take place after Russian and US officials hold consultations on strategic stability issues. This was stated by the press secretary of the Russian President Dmitry Peskov. At the same time, he pointed out that Putin was satisfied with the communication with Biden on the teleconference, since this format "allows for a fairly frank talk." The talks between the leaders of the two world powers took place on the evening of December 7 and lasted for about two hours. 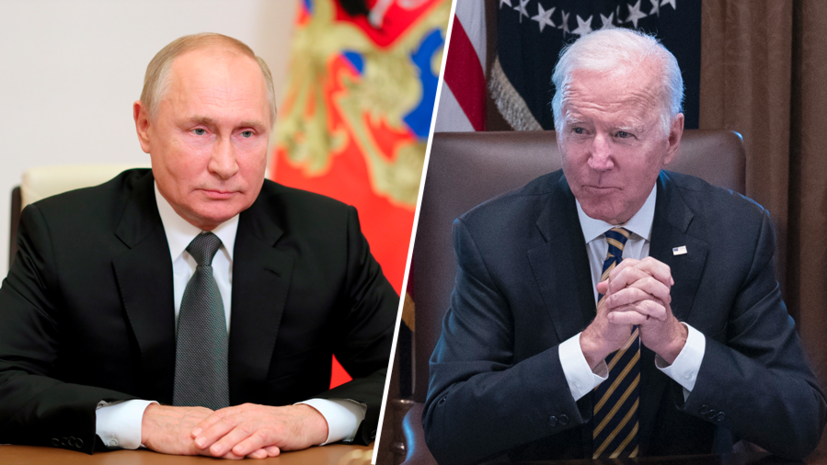 Vladimir Putin liked the video format of communication with his American colleague Joe Biden, because it "allows you to talk quite frankly."

This was stated by the press secretary of the Russian President Dmitry Peskov.

“The presidents said that after the contacts of the representatives took place, it would be necessary to talk again.

But now, at the moment, it is not possible to answer when it will be possible, ”said Peskov.

A Kremlin spokesman explained that a new round of high-level consultations will take place following contacts between representatives of Russia and the United States.

“The presidents agreed that they will appoint their representatives, who will very quickly begin discussing this complex confrontational situation, discussing issues of strategic security on the continent.

It is not yet possible to say exactly when it will be, but the presidents meant that this should take place very, very quickly, "Peskov said.

On Tuesday, December 7, a teleconference took place between Vladimir Putin and Joe Biden.

The talks between the presidents of Russia and the United States lasted just over two hours.

According to the Kremlin press service, the predominant place in the dialogue between the two leaders was taken by the internal Ukrainian crisis and the lack of progress in the implementation of the Minsk agreements.

"The President of Russia, with specific examples, illustrated the destructive line of Kiev, aimed at the complete dismantling of the Minsk agreements and agreements reached in the" Normandy format ", expressed serious concern about Kiev's provocative actions against Donbass," the Kremlin stressed.

In turn, Joe Biden drew attention to the allegedly "threatening" nature of the movement of Russian troops near the border with Ukraine.

He also spoke about possible sanctions that the United States, together with its allies, would be ready to impose in case of further escalation.

According to Yuri Ushakov, aide to the President of the Russian Federation, the discussion of Ukraine "took a very long time."

He also commented on the topic of the allegedly preparing Russia "invasion" of Ukraine.

“This was not even discussed, how to send troops to Ukraine, what is it - some kind of invasion or what?

There was not even a talk about "this", - he explained.

Another aspect of the conversation between Putin and Biden was NATO's approach to the Russian borders.

As the President of the Russian Federation pointed out, it is the North Atlantic Alliance that is making "dangerous attempts to develop" the territory of Ukraine, and is also building up its military potential near the Russian borders.

“Therefore, Russia is seriously interested in obtaining reliable, legally fixed guarantees that exclude NATO's eastward expansion and the deployment of offensive strike weapons systems in states adjacent to Russia,” the Kremlin said in a statement.

At the same time, Assistant to the American President for National Security Jake Sullivan, answering a question about Biden's position on Ukraine and NATO, stressed: "He adheres to the thesis that the country should be able to freely choose with whom it will unite."

At the same time, Yuri Ushakov said that Biden promised to discuss with his alliance colleagues Moscow's concerns about NATO's eastward movement.

He also drew attention to the fact that the presidents of Russia and the United States instructed their representatives to deal with this sensitive issue.

“I can say that it is logical to discuss issues related to the provision of the necessary security guarantees to us, including in the context of non-deployment of offensive weapons and non-advancement of further NATO to the east, these issues are logical to discuss in the group on strategic stability,” Ushakov noted.

Also on russian.rt.com Open Door Block: How the US Seeks to Justify NATO's Eastward Expansion

Leonid Slutsky, Chairman of the State Duma Committee on International Affairs, believes that the results of the negotiations give grounds for cautious optimism, but "no one expects miracles" due to the large number of accumulated sharp contradictions.

"The rather laconic messages from both sides still give reason to hope that the tension of the last month will subside, as well as the degree of anti-Russian hysteria in the Western political and media space will decrease," he wrote on his Telegram channel.

In turn, the vice-speaker of the Federation Council, Konstantin Kosachev, expressed the hope that "near-Ukrainian passions" after the leaders' conversation "will gradually subside."

At the same time, Kosachev added that Moscow is counting on concrete results of the talks, in particular, on the continuation of consultations within the working groups, "clearing the blockages in bilateral relations", including visas and diplomatic missions, as well as achieving progress on the issue of Iran, Afghanistan, Libya, Syria and other issues.