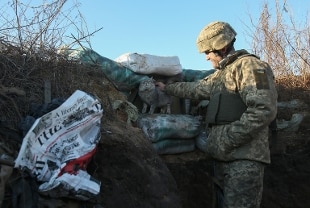 December 07, 2021 "Leaders stressed their support for Ukraine's sovereignty and territorial integrity and discussed their shared concern for Russian military strengthening at the borders and increasingly harsh Russian rhetoric." This is what we read in a note from the White House, which reported the phone call between American President Joe Biden, French Emmanuel Macron, German Chancellor Angela Merkel, Italian Prime Minister Mario Draghi and British Boris Johnson.

The United States coordinated with European allies ahead of the talks between President Joe Biden and Russian President Vladimir Putin on a package of financial sanctions that would impose "significant and serious economic damage to the Russian economy" if Putin were to proceed with it. an invasion of Ukraine. This was reported by a senior official of the Biden administration. "We have had in-depth discussions with our European partners on what we would collectively do in the event of a major Russian military escalation in Ukraine - he explained - and we believe we have a path to follow that would involve substantial economic countermeasures both by Europeans and by of the United States ".

White House spokesperson Jen Psaki stresses that the goal of the virtual summit with Putin "is to communicate diplomatically that it is time for Russia to withdraw its military forces on the border with Ukraine". But "other options are also ready". The leaders urged Russia to "de-escalate tensions and agreed that diplomacy, particularly through the Normandy format, is the only way to resolve the conflict in Donbass through the implementation of the Minsk agreements". Finally, the group agreed that "their teams will remain in contact, also in consultation with NATO allies and EU partners, with a coordinated and comprehensive approach". Moscow denies any warlike intentions and accuses the West of provocation,particularly with military exercises in the Black Sea, which it sees as part of its sphere of influence.