"Pubai Meeting" is staged again! Can US-Russian relations break out of the "Auguas bull ring"?

China News Service, December 8th. On December 7, local time, the "Pubby meeting" was staged again. Russian President Putin and U.S. President Biden held a two-hour "closed-door" video meeting, which attracted much attention from the outside world.   Recently, the relationship between the United States and Russia has continued to decline. Although the Geneva summit was held under the attention o 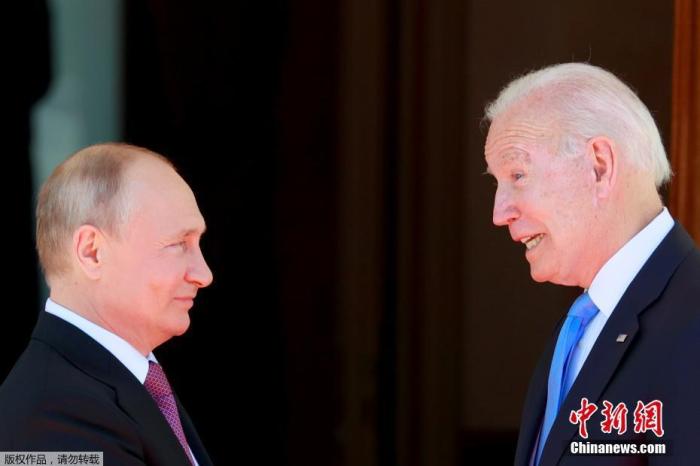 Recently, the relationship between the United States and Russia has continued to decline. Although the Geneva summit was held under the attention of the outside world in June, the actual results of the face-to-face meeting between the two were limited.

And what did the two "old rivals" talk about in this "Publish Meeting"?

Is the US-Russian relationship still expected to jump out of the dirty and huge "Auguas bullpen"?

Although this video meeting between Putin and Biden was a closed-door conversation, from the statements issued by the White House and Russia, the two sides have "a little bit of gunpowder smell" surrounding the Ukrainian issue.

The tone can also be seen from the tone before and after the meeting.

Before finalizing the video conference, the White House stated that Biden expressed concern about the Ukrainian issue.

However, after the talks with Putin, the White House stated that Biden expressed serious concerns about the Ukraine issue, adding the word “serious”, which shows that the Biden administration’s “increased worries”.

Most importantly, the White House declared that if Russia continues to "invade" Ukraine, the United States will adopt a strong economic response.

Before the talks, the American tone was still "possible", but now it has become affirmative.

Jack Sullivan, the US National Security Adviser, particularly emphasized the strength of the measures in the White House press conference.

He said that President Biden looked into President Putin's eyes and said that the United States will do what it wanted to do in 2014 but did not do it.

In March 2014, Crimea and Sevastopol held a referendum. More than 90% of voters agreed to leave Ukraine and join Russia.

Ukraine does not recognize the aforementioned referendum and opposes the merger of Crimea and Sevastopol into Russia.

As a result, the United States and other Western countries have imposed multiple rounds of sanctions on Russia.

What the United States meant is self-evident. If economic sanctions are adopted this time, the scale will be "much larger" than last time.

Immediately after the talks, Biden called the leaders of European allies Britain, France, Germany, and Italy. The White House stated that all the allies reiterated their support for Ukraine's sovereignty and territorial integrity.

Biden also plans to talk to the President of Ukraine on the 9th to explain the situation of the talks.

The Russian side’s statement on the talks stated that when US President Biden emphasized the so-called “threatening” of Russia’s deployment of troops near the Ukrainian border, Russian President Putin responded that Russia should not be held responsible for this issue.

Russia believes that it is NATO that is trying to use Ukrainian territory to strengthen its military capabilities near the Russian border. Therefore, Russia very much hopes to obtain reliable and legally binding guarantees to exclude NATO’s eastward expansion and the deployment of offensive weapon systems in Russia’s neighboring countries. Possibility.

However, Sullivan said that the United States will provide Ukraine with additional defensive equipment.

The United States will strengthen the NATO allies on the Eastern Front to deal with the escalation of the conflict.

Russia called the talks frank and pragmatic, and the United States also called Biden outspoken in the talks. There was indeed no “retreat” between the two parties, but it may not be possible to talk about relaxation and breakthroughs.

Approaching the "critical point of conflict"!

The Ukrainian crisis is difficult to solve?

The Ukrainian issue, which the Pubai Conference focused on, is also one of the focuses of the most attention from the outside world.

Since the outbreak of the Ukrainian crisis in 2014, Russia-Ukraine relations have taken a turn for the worse.

NATO, led by the United States, has recently continued to exaggerate the "Russian threat theory."

Western media claim that Russia has assembled nearly 100,000 soldiers near the border and may "invade" Ukraine as early as January next year.

Before the "Public Meeting", the United States still uttered harsh words, or it will adopt severe financial restrictions against Russia.

Russia has repeatedly "refuted rumors" and blamed the West for the escalation of tensions.

Putin also warned that once NATO crosses the line, it will trigger a strong reaction from Russia.

With the Ukrainian crisis approaching the "critical point of conflict," the "Washington Post" described the dialogue between Putin and Biden as likely to be "war and peace."

Now, the leaders of Russia and the United States have finally sat down to talk.

However, public opinion is not optimistic about the future direction of the situation.

After all, there are huge differences between Russia and Ukraine, and the United States is unlikely to promise Russia to stop its eastward expansion.

Linde, the rotating chairman of the Organization for Security and Cooperation in Europe and the Swedish Minister of Foreign Affairs, previously pointed out that the Ukrainian issue is not expected to be resolved "in the near future."

Data map: November 11, 2018, local time, Paris, France. The centennial commemoration of the Armistice of World War I was held at the Arc de Triomphe in Paris. More than 60 national and government leaders including Russian President Putin and then U.S. President Trump Gather in Paris to attend the commemorative event.

Impossible to clean up the "Auguas bullpen"?

Similar to the Geneva summit with “thunder and little rain”, the outside world generally does not have high expectations for major progress in the talks and believes that it is difficult to make a breakthrough in US-Russian relations.

For a long time, the United States and Russia have lacked strategic mutual trust and have accumulated many "old problems".

This year alone, there have been frequent fierce confrontations in various fields such as diplomacy, economy, and military.

It’s no wonder that the press secretary of the Russian President Peskov compared the relationship between the two parties to the dirty and huge "Auguas bullpen" in ancient Greek mythology before the "Pubbai Meeting." clean."

In April, the Biden administration announced that it would impose large-scale sanctions on Russia and expel Russian diplomats on the grounds that Russia was suspected of carrying out "cyber attacks, interference in the US election, etc.".

Russia immediately took countermeasures and included it on the list of countries that are not friendly to Russia.

Not long ago, Russia ordered the staff of the US Embassy who had worked in Moscow for more than three years to leave the country before January 31, 2022.

Because of the interests of many countries, the Russian-German natural gas project "Beixi No. 2" was blocked and opposed by many parties before it was officially put into operation.

Some countries and companies participating in the project have always faced the threat of sanctions from the United States.

Now, when the energy crisis is plagued by Europe, Germany suddenly suspends relevant approvals, triggering speculations that the relationship between Russia and the West, which is hovering at a freezing point, has worsened.

This is NATO's largest joint military exercise since the end of the Cold War.

The United States and its NATO allies conducted intensive military activities in the Black Sea waters.

The Russian army issued repeated warnings and carried out the first live expulsion of NATO warships after the Cold War.

On the other hand, even though the United States and Russia finally agreed to extend the "Treaty on Measures to Further Reduce and Limit Offensive Strategic Weapons" after Biden took office, arms management is still a very "serious subject."

The confrontation between the two countries is quite similar to the beginning of the Cold War.

Russian scholar Kortunov analyzed, "If the United States and Russia can't figure out where the other side will set the red line, they may fall into an endless arms race again."

However, it is worth noting that, compared with Trump, who does not play his cards according to common sense, Biden is obviously more experienced in international issues and "knows the necessity of military management and the importance of diplomacy."

And Putin, who has experienced the ups and downs of US-Russian relations, is undoubtedly a veteran political veteran with scheming fortunes.

When Biden labelled him a "killer" and detonated international public opinion, Putin didn't take it seriously and only said, "I wish him good health!"

The game between the United States and Russia will continue. It remains to be seen how the leaders of the two countries will make moves and where the bilateral relations will go.