On the southern frontier: how the modernized T-72B3M tanks will strengthen the Russian military base in Tajikistan

The 201st Russian military base in Tajikistan has received a batch of 30 modernized T-72B3M tanks with improved combat characteristics, the Russian Defense Ministry said. The T-72B3M is equipped with a new propulsion system, a complex of built-in passive and active protection, a 125-mm gun with improved ballistics and shot resource, as well as an Aqueduct communication system and a multichannel sight with a thermal imager. Experts emphasize that equipping the Russian base in Tajikistan with T-72B3M tanks and other weapons is especially important in light of the changing military-political situation in Central Asia. 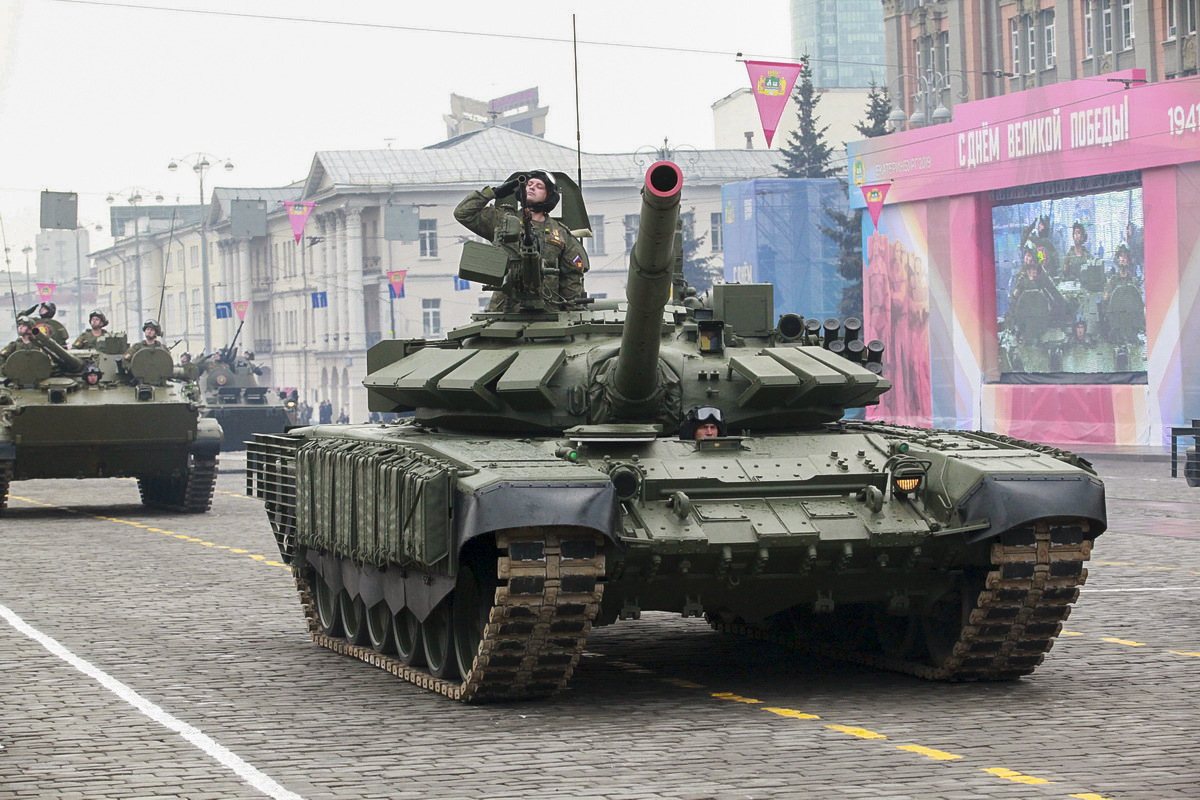 The 201st Russian military base in Tajikistan has received a batch of 30 modernized T-72B3M tanks with improved combat characteristics, the Russian Defense Ministry said.

"A battalion of modernized tanks, which has arrived to replace obsolete equipment, will significantly increase the combat capabilities of a tank unit due to improved maneuverability and armor protection of the crew," the Russian military department said in a statement.

The Ministry of Defense notes that the T-72B3M is equipped with a new propulsion system, a built-in passive and active protection system, as well as an Aqueduct communication system and a multi-channel sight with a thermal imager.

“In addition, the fighting compartment of the tank was modernized: a 125-mm gun with improved ballistics and shot resource, a digital ballistic computer and a panoramic sight of the commander of a combat vehicle were installed.

Equipping the tank with these systems allows the crew to quickly detect and destroy targets, ”emphasizes the RF Ministry of Defense.

In turn, the commander of the Central Military District, Colonel-General Alexander Lapin, said that several more units were equipped with modern technology.

The T-72B3M is a deeply modernized version of the Soviet T-72 main battle tank, which forms the basis of the armored weapons of the RF Armed Forces.

It differs from its predecessors with the V-92S2F engine with an increased power of 1130 horsepower - for comparison, the previous modification of the T-72B3 model of 2011 was equipped with 840 hp engines - and an automatic transmission, which allows it to reverse faster.

Thanks to this power plant, the tank can reach speeds of up to 65 km / h on the highway and has a cruising range of 500 km.

This tank received the 2A46M-5-01 cannon as the main gun, which can also be used as a launcher for anti-tank missiles.

As an auxiliary weapon, it is equipped with 7.62 mm and 12.7 mm machine guns, as well as a smoke grenade launch system.

Fire control is carried out by the Sosna-U system, which includes a thermal imager, a laser range finder and an automatic target tracking.

The equipment of the machine allows the gunner-operator to detect and destroy objects day and night in any weather.

The tank's protection was also improved - instead of the outdated Kontakt-5 complex, the new vehicles are equipped with Relikt reactive armor.

In addition, the T-72B3M is equipped with lattice screens that protect the tank from cumulative ammunition.

These tanks began to enter the troops in 2018, and in September 2020, Russian Defense Minister Sergei Shoigu announced that all T-72s in service with the Russian army would be upgraded to the T-72B3M model.

Shoigu noted that the impetus for a serious modernization of the T-72 was the first International Army Games, in which tanks of the T-72B1 modification took part several years ago.

As a result of these competitions, experts proposed to apply a number of technical solutions that would significantly increase the combat effectiveness and reliability of these combat vehicles.

“As a result, a modification of the T-72B3M appeared, which is not inferior in its characteristics, and in some ways is superior to modern foreign tanks.

The Defense Ministry plans to modernize all T-72 tanks in service to this modification, ”explained Sergei Shoigu.

The improved characteristics of the T-72B3M, in an interview with RT, were highly appreciated by the head of the Bureau of Military-Political Analysis, Alexander Mikhailov.

“T-72B3M today is the most perfect modification of the legendary main battle tank T-72, which was adopted in the USSR and became one of the most widely used tanks in the world.

This machine is capable of meeting all the challenges that may appear on the modern battlefield, ”the expert emphasized.

Recall that the 201st base in Tajikistan is the largest Russian military facility outside the Russian Federation.

It is located in two cities - Dushanbe and Bokhtar.

At the end of 2019, the base received S-300PS anti-aircraft missile systems and other equipment, including a mobile command post, launchers, radar, guidance systems, and support vehicles.

In 2020, the base was armed with the upgraded BMP-2M infantry fighting vehicles, equipped with an automatic fire control system, panoramic and night sighting and observation devices, a new R-168 Aqueduct radio station, and the air group was armed with modern modifications of the Mi-8MTV5-1 transport and combat helicopters.

The commander of the Central Military District, Colonel-General Alexander Lapin, at the beginning of November 2021, also said that the base units will receive more than 60 units of modern weapons by the end of the year.

In addition, the Central Military District reported that from December 1, the base will double the intensity of combat training compared to last year.

“Since the beginning of the new academic year, which starts on December 1, the volume of hours of day and night classes with servicemen has doubled.

For drivers and crews of combat vehicles, about 1,000 driving lessons, more than 3,000 fire, tactical and special training sessions will be held, ”the district said.

In addition, additional flight hours have been added for the crews of the aviation group with the development of complex piloting elements in mountainous terrain.

Also, units of the 201st military base in Tajikistan during the winter training period will conduct about 40 exercises.

The strengthening of the Russian base is taking place against the background of the complicated situation in Afghanistan.

This summer, the United States and its allies, after a 20-year presence, began a hasty withdrawal of their military contingent from this country.

As a result, the Taliban * launched an offensive against the positions of government forces.

The situation has led to increased tensions on the Afghan-Tajik border.

Permanent Representative of Dushanbe to the CSTO Khasan Sultonov, at a meeting of the organization's permanent council on July 7, officially asked the organization to help strengthen the protection of the border with Afghanistan.

Since then, the base of the RF Armed Forces in the country has been reinforced with new equipment, and the Russian military conducted a series of operational exercises with the military of Tajikistan and Uzbekistan.

In a commentary on RT, Dmitry Litovkin, editor of the Nezavisimoye Voennoe Obozreniye newspaper, noted that equipping the Russian base in Tajikistan with new T-72B3M tanks, taking into account the changing geopolitical situation in Central Asia, is the right decision.

“The delivery of these machines to the Russian military base in Tajikistan is a matter of ensuring the security of the entire region.

There are fears that extremist groups from Afghanistan may cross the borders of Tajikistan, Uzbekistan and move to the Russian Federation and carry a terrorist threat.

These machines are very much needed and in demand there.

The militants are already infiltrating the territory of the countries adjacent to Afghanistan and they must be contained, ”the expert emphasized.

The large-scale rearmament of the units of the 201st military base of the Russian Federation in Tajikistan will strengthen the position of the Russian military on the southern borders of the CSTO, Dmitry Litovkin added.

“Russian Defense Minister Shoigu said that we will react to the changes that are taking place in Afghanistan.

Now consistent steps are being taken, which show that we are ready to keep the border shut and, if something happens, to give the necessary rebuff, "the interlocutor of RT summed up.

* The organization is under UN sanctions for terrorist activities.