Karl Nehammer takes the oath: he is the new Austrian chancellor

"We have a pandemic to fight, this requires all our strength," said the new head of the Vienna government 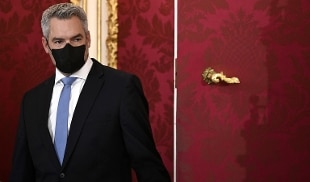 "It is important to have a government that is capable of acting swiftly and that can get to work. We have a pandemic to fight, that requires all our strength," Nehammer said.

The seventeenth chancellor since the war will lead the government formed by OeVP and Verdi, after the resignation of Alexander Schallenberg. His predecessor took a step back to allow Nehammer to play the dual role of chancellor and Oevp leader, after Sebastian Kurz's farewell to politics, overwhelmed by corruption allegations. Schallenberg thus returns to cover the role of Foreign Minister.

Some Oevp ministers and undersecretaries have also sworn with Nehammer and Schallenberg, joining the executive with the reshuffle.

The new interior minister is Gerhard Karner, the new finance minister is Magnus Brunner, the director of the University of Styria Martin Polaschek takes the place of the Minister of Education Heinz Fassmann, while the leader of the youth OeVP, Claudia Plakolm, becomes secretary of Status at the Federal Chancellery.