France, an investigation into the violence at the rally of the Ultra Right candidate Zemmour opened 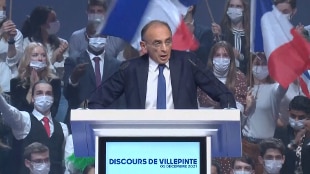 06 December 2021French prosecutors have opened an investigation into the violence that broke out during the first official demonstration of the electoral campaign of the far-right presidential candidate Eric Zemmour, on the outskirts of Paris. This was announced by the Bobigny public prosecutor's office.

The prosecutor's office said police arrested around 60 people after fists and chairs flew and that anti-racist activists were injured during Eric Zemmour's rally with thousands of supporters north of Paris on Sunday.

The SOS Racisme group condemned the savage beatings that targeted its activists during the demonstration. The president, Dominique Sopo, compared the violence to attacks by white supremacists on civil rights activists in the United States. The people at the gathering "were so drunk with hatred, so violent, that they didn't bother beating up people, even women, shit in front of the cameras present," Sopo said. "This candidate triggers hatred," he added.

In addition to the complaint of SOS Racism, the investigations concern the attack on the candidate by an individual before he enters the scene.

The man was immediately arrested by the police.

Following the attack, Zemmour, of Berber Jewish origin, suffered a wrist injury and was prescribed nine days of sickness.