"Tiangong Class" will start, what are the ways for China Space Station to teach in space for the first time?

"Tiangong Class" is about to start, this is the first live broadcast of a space lecture on the China Space Station. What's the emphasis on teaching from the "highest" podium 400 kilometers away? What's so special about the first lecture of "Tiangong Classroom"? What can people expect from the space classroom in the future? Yang Yuguang, vice chairman of the International Astronautical Federation 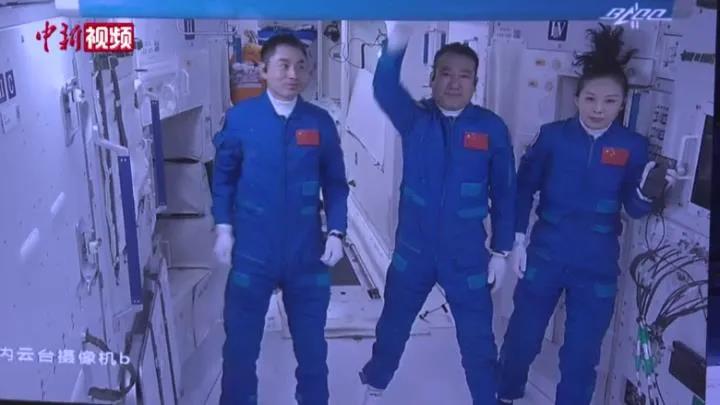 "Tiangong Class" is about to start, this is the first live broadcast of a space lecture on the China Space Station.

What's the emphasis on teaching from the "highest" podium 400 kilometers away?

What's so special about the first lecture of "Tiangong Classroom"?

What can people expect from the space classroom in the future?

For space teaching, what preparations do astronauts and ground crews need to do?

Compared with teaching on the ground, what is special about teaching in space, and what are the requirements of the space station environment for teaching?

In terms of engineering technology, the biggest challenge is a smooth communication link. To ensure that the video is clear and not stuck, the "Skylink" relay satellite, space station, and ground monitoring and control station need to cooperate closely.

In addition, the auxiliary teaching aids used for space teaching need to be sent to the space station through the Tianzhou cargo spacecraft or the Shenzhou spacecraft.

Although the Tianzhou spacecraft can carry more than 6 tons of materials, most of them are consumables and scientific research supplies needed by the astronauts. There is not much space for teaching aids, which requires careful planning.

The core module of Tianhe-1 has a volume of about 50 cubic meters, which is much larger than that of Tiangong-1, but most of this space is occupied by astronauts’ scientific research, daily necessities, and space station operation equipment. , Volume is limited, and special design and consideration are required.

In the process of transportation, teaching aids will also experience harsh environments of overweight and severe vibration, so it is necessary to conduct vibration experiments and other assessments on the teaching aids in advance.

What is the emphasis on experiment selection in space teaching?

What types of courses are more suitable for teaching in space?

In addition to the constraints on teaching aids, in terms of course selection, phenomena that differ between heaven and earth are more suitable for teaching content, such as physics and chemistry under microgravity conditions.

The former is the study of natural phenomena, such as physical and chemical phenomena such as fluid flow and object combustion under microgravity conditions, and the latter includes engineering practices, such as water purification systems and urine treatment systems.

In fact, Liu Boming, the crew of the "Shen XII" astronaut, has briefly introduced where drinking water comes from in space.

I think that in the future, these can all be used as important content of teaching, and the astronauts will conduct more detailed and in-depth demonstrations on site.

"Tiangong Classroom" can have more full interaction between heaven and earth

What experience did you accumulate in the space teaching 8 years ago?

What is the significance of arranging the Shenzhou 13 astronaut crew to conduct the first space teaching on the Chinese Space Station?

Compared with 8 years ago, I think the important thing is that China's spaceflight has received very different attention from the world.

Recently, there was a "Global Photographing Temple" event. People from all over the world are scrambling to take images of the transit of the Chinese Space Station.

I started shooting Tiangong and the International Space Station a long time ago. In the past, such activities did not attract much attention in China, but now the Chinese space station and astronauts have attracted the attention of the world. This has been reflected in foreign social media.

This live broadcast for the whole world, I believe it will get more attention from the world.

The second difference is that the social benefits of China’s first space teaching have gradually become apparent.

Eight years ago, more than 60 million primary and middle school students watched the live broadcast. Now some of them have graduated and even become astronauts. Teacher Yaping’s teaching that year is already blooming. The "Tiangong Class" lecture this time is a continuation of the past.

In addition, compared with Tiangong-1's first space teaching, the exhibition space during this lecture is larger, the communication guarantee technology is more mature, and more space-to-earth interaction can be carried out.

Astronauts give lectures in space during their busy missions, which reflects the importance attached by the National and Manned Space Engineering Office to space science education.

Question: The China Manned Space Engineering Office has recently received letters from the 2013 "Space Class" students to Teacher Wang Yaping. They all stated that the space teaching 8 years ago had planted the seeds of their aerospace dreams.

In your opinion, what is the enlightenment effect of space teaching for primary and middle school students?

In the 1960s and 1970s, many children in the United States were inspired by the Apollo moon landings and became interested in engineering and natural sciences. This also provided the talent foundation for the economic leap of the United States in the 1990s.

In fact, there are similar phenomena in China. Yang Liwei’s first flight to the sky and Wang Yaping’s first space teaching have greatly increased the interest of primary and middle school students in space exploration, physics, and mathematics. This is not only very important for the development of China’s aerospace talent team, but also for the promotion of the country. The development of engineering and natural sciences also plays an inestimable role.

Building a bridge between the public and aerospace is extremely important

Question: In 2007, a foreign astronaut completed the first space teaching on the International Space Station. Could you please introduce the history of foreign space teaching?

What is the current situation of space teaching and space science popularization at home and abroad?

first space teaching has gone through a tortuous process.

The United States once launched the "Teacher in Space Project" and selected two teachers from tens of thousands of applications, namely McAuliffe and Barbara Morgan, one master and one backup.

In 1986, the Challenger crashed and McAuliffe was killed, and the plan was cancelled.

In fact, simple space science popularization activities in the world are very frequent. Some use relay satellites to connect in real time, and some are recorded and broadcast, in various forms.

Such activities are very common in foreign countries, and are not limited to large space powers. This also shows the recognition and importance of space education activities in various countries.

For another example, in the past, amateur radio enthusiasts used the frequencies provided by the ITU to make their own radio stations.

At that time, the Mir space station set up a special radio station. When it passed over a certain place, astronauts could talk directly with local radio enthusiasts through the radio station without going through relay satellites or ground stations.

It is worth mentioning that although such informal space science popularization activities are very frequent internationally, there are still few formal space lectures like China, so its significance is very prominent.

Question: With the long-term operation of the Chinese Space Station in orbit, China’s first space science education brand "Tiangong Classroom" will be launched in series. Chinese astronauts will serve as "space teachers" and will be carried out in a coordinated interaction between space and earth.

What is the significance of China's serialization of space science education activities in the future?

In terms of aerospace science popularization, what other roles can the Chinese space station play?

The sustainable development of the aerospace industry is inseparable from the understanding and support of the public.

But there are also some space activities, such as manned spaceflight, deep space exploration, and space science, which have high investment, high threshold, and long payback periods.

In this regard, building a bridge between the public and aerospace is extremely important. It is necessary for the public to understand these characteristics, understand and support the aerospace industry.

The future aerospace science education activities can be developed in two directions: breadth and depth.

The first is that the teaching content is more extensive, not only limited to physical and chemical phenomena under microgravity conditions, but also can introduce space scientific research and engineering research; second, more in-depth and influential activities can be carried out, and there are already students in China. CubeSat, as the space launch mission is carried into space, in the future, space science experiments designed by students can also enter space. For example, the American space shuttle once flew into the sky with a scientific experiment project designed by Chinese students. One of the experiments was to study the weightlessness of paramecium. Growth and reproduction in the environment.