He was 98 years old. He challenged Clinton in the 1996 presidential elections after a long career in Congress &nbsp; 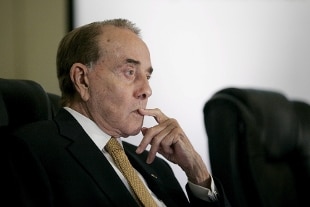 The death was announced by the Elizabeth Dole Foundation, the foundation created by his wife.

"It is with deep sorrow that we announce that Senator Robert Joseph Dole died this morning in his sleep. At his death, at the age of 98, he had served the United States loyally for 79 years," the message.

A Grand OldParty attorney and senator for the state of Kansas from 1969-1996, he also served as a majority leader for several years, setting the record for the longest period of time in that role by one person. In 1976 he was nominated for vice president by Gerald Ford, but in that election the Republicans were defeated by Democrat Jimmy Carter. After attempting a candidacy in the Republican primary in 1988, overwhelmed by Ronald Reagan's vice president, George HW Bush, Dole was the Republican party's candidate for the 1996 presidential elections but was defeated by outgoing president Bill Clinton.

The former senator has also written a book entitled "Great political spirit: laugh (almost) all the way to the White House", a book of political anecdotes seasoned with the humor that has always distinguished him.

Of himself he said "I have irreverence in my blood."

Dole had a strong connection with Italy, having fought there during the Second World War.

Lieutenant and commander of Company I of the 85th regiment, he was wounded on April 14, 1945, the first day of the Spring Offensive, the attack of the American V Army which led to the final breakthrough of the German lines in the Upper Apennines between the provinces of Bologna and Modena.