Luiz Inácio Lula da Silva, President of Brazil from 2002 to 2010, made a triumphant tour of Europe in November. The opportunity for him to garner the support of the European left, all senses… 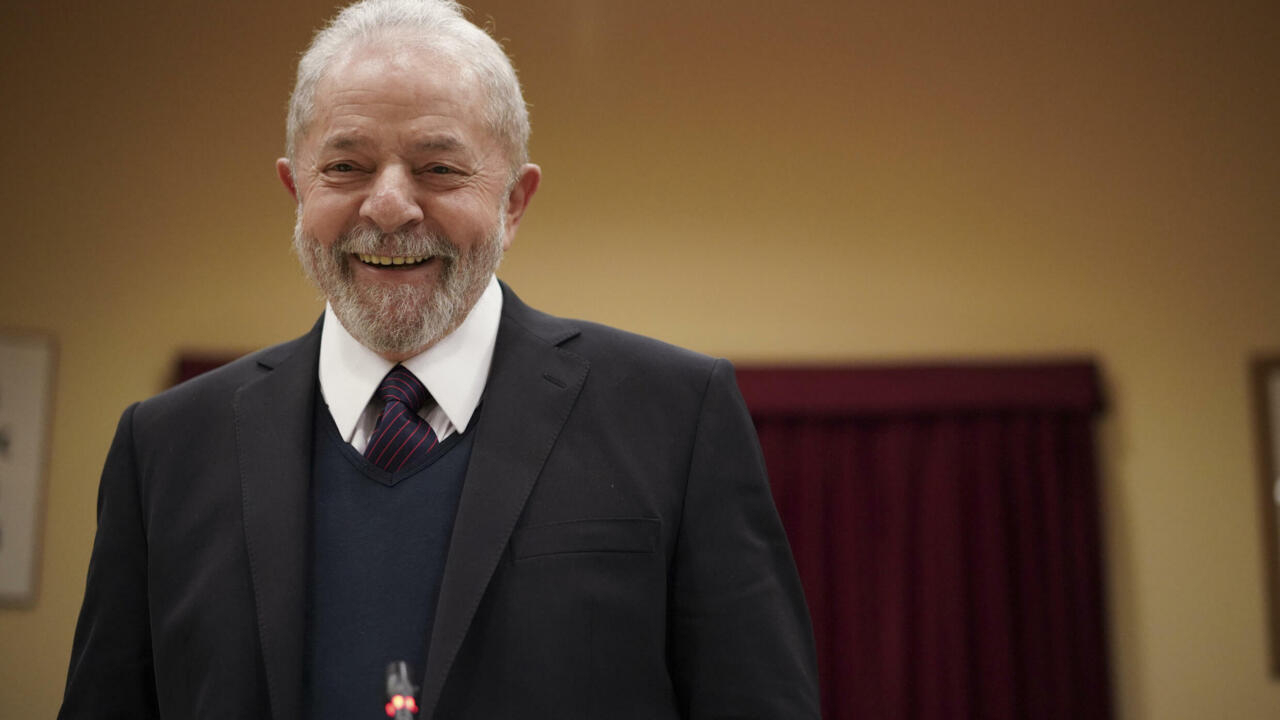 For José Luis Rodriguez Zapatero, the former Spanish socialist leader, "Lula is a master thinker when it comes to reducing inequalities".

"I am delighted to have seen you again dear Lula, you represent hope for Brazil", added François Hollande on November 17, 2021 to welcome the arrival in Paris of the former Brazilian president.

From the European Parliament in Brussels to Madrid, via Berlin and Paris, Lula, cleared by the Brazilian Supreme Court in April 2021, offered himself a European tour worthy of a head of state.

Speeches, conferences, interviews, hugs, smiles and thanks have punctuated an overloaded agenda.

In the lounges of a large Parisian hotel, where he came to receive the Prize for political courage awarded by the journal Politique internationale, the 76-year-old ex-president seems to have the energy and determination of a man of 30 years old, as he likes to say when asked about his age.

All smiles reunion between Jean-Luc Mélenchon and Lula, on November 17 in Paris.

Is he a candidate in the 2022 presidential elections to face Jair Bolsonaro? "I'll let you know in February or March," he replies calmly. Do you blame the press for dragging you through the mud? "In Brazil, there is a part of the press which does not seek to inform but to elect the candidate it has chosen. It is an industry of lies", he answers always so calmly.

The former steelworker, who regained his freedom in November 2019, is equal to himself when he proclaims his love for the Brazilian people, "good, democratic, generous, hardworking and who is much better than the ignorant who currently lead ", or when he defends Brazil's vocation to become an economic and regional power for the good of the planet. The eye is mischievous, the sentences are well established and the charm operates on the dozens of business leaders, politicians and journalists who have come to listen and see him.

A few hours later, he was received for lunch at the Elysee Palace by Emmanuel Macron with the splendor of the Republic.

The interminable judicial sequence that began in 2011, which saw Lula being convicted in several cases for corruption, embezzlement of public funds and obstructing the exercise of justice, seems to be over.

For Gaspard Estrada, director of the Political Observatory of Latin America and the Caribbean (Opalc) at Sciences Po, the former Brazilian president is "back in the Champions League for international leaders".

With this tour, Lula demonstrated that he is not an outcast in the eyes of the international community, unlike Jair Bolsonaro.

An essential element in his eyes to win back the hearts of Brazilians and build his victory in the election of October 2022.

Back in Brazil, and before another trip to the United States scheduled for the coming weeks, the former president will continue the electoral strategy that has so appealed to him to accede to the presidency of Brazil in 2002: talk with everyone , negotiate and rally political forces beyond the Workers' Party (PT), its formation, especially at the center of the political spectrum.

"Lula has no competition on the left but after the dismissal of Dilma Rousseff (in 2016, Editor's note), the PT turned to its left. During the 2018 presidential election, its candidate chose a running mate more to the left But historically, the PT wins only with a formula which proposes a vice-president who comes from the center-right ", underlines Oliver Stuenkel, professor of international relations at the Getulio Vargas foundation in Sao Paulo.

During his two mandates, Lula had as vice-president an evangelical businessman, José Alencar, "who had allowed the rallying of certain sectors of the society which were not favorable to him", adds Armelle Enders, historian of contemporary Brazil at the University of Paris-8.

The essential "Centrao", soft and corrupt belly of Brazilian politics

Because in order to govern Brazil, all the presidents since the return to democracy in 1985 have had to form an alliance with a multitude of small, rather conservative parties who, in Brasilia, become the spokespersons for "deep" Brazil, the one who defends the carrying weapons, places the Bible above everything and works in the service of agribusiness (23.5% of GDP and 44% of exports of the largest economy in Latin America in 2018, according to official figures).

Divided into a multitude of acronyms (25 parties have elected representatives in Congress) and called by the Brazilians "Centrao" ("big center") these formations make rain and shine. "You can't govern Brazil without the Centrao, its members will still be in government and don't care who wins the election. It's a peculiarity of the Brazilian political system," said Oliver Stuenkel.

It is therefore likely that Lula wishes to "reconnect with the happy times of his presidency and put an end to political polarization", by returning to "Lulism", a synonym of "conciliation, of acceptance of the realities of Brazilian political life, c 'that is to say the policy of barter, when one exchanges his support for material advantages, apart from any political ideology "according to Armelle Enders.

"On the left, he has also been widely criticized for having personal links with many personalities on the right or the center deemed infrequent," adds the historian.

But in 2022, it is likely that this same left will not be choosy, since the stake in the election is nothing less than to put Captain Jair Bolsonaro permanently into retirement.

Reconnect with the army?

On this ground, in Paris, Lula was unusually uncompromising. "The role of the Brazilian armed forces is very well defined by the Constitution: they defend the sovereignty of our country. (…) They are at the service of civil society. This is what our Constitution says. Today, there is has 8000 soldiers who occupy positions of civil responsibility, of confidence. They will have to leave and we will replace them by non-military people. There is no problem, but I do not want to speak about elections with the soldiers " , he said to reporters on November 17.

Under the presidency of Jair Bolsonaro, the image of the army was tarnished by its catastrophic management of the Covid-19 crisis, when the Brazilian president briefly entrusted the Ministry of Health to a soldier, General Pazuello.

Also, it would not be surprising if certain senior officers were not opposed to negotiations with Lula who, during his two terms of office, displayed unfailing nationalism, especially when it came to the purchase of arms for the armed forces.

Who can disrupt the announced duel between Bolsonaro and Lula?

In a Brazil hard hit by unemployment and the health crisis, while hunger has resurfaced in certain regions of the country, Lula, who has been at the top of all polls for months, wants to focus his candidacy on reconciliation, in celebrating Brazil and reassuring.

And yet, it is indeed an ultra-polarized duel that is shaping up between the ex-president and Jair Bolsonaro.

Other personalities are trying to disrupt this announced clash.

We can cite Judge Sergio Moro, the one who sent Lula to prison in 2018 a few months before the presidential election before becoming the Minister of Justice of the current Brazilian president.

Or the "Toucan" Joao Doria, a multimillionaire businessman who became governor of the wealthy state of Sao Paulo in 2019.

While many Brazilians are interested in a "third way" out of the extreme political polarization in which the country has been plunged since 2015, Oliver Stuenkel believes that "Lula hopes to face Bolsonaro in the second round and Bolsonaro hopes to face Lula. C ' is why they don't really attack each other just yet ".

For Armelle Enders, "Lula will have a hard time bringing the business community back to him. In 20 years, a lot has changed. A new right, very libertarian, has gained strength. She is looking for a third way, between a Lula too far to the left and a Bolsonaro that is too unpredictable. It could turn to the candidacy of judge Moro who can hamper Bolsonaro ".

The unknowns of a decisive election

A victory for Lula, hoped for by many Brazilians and also by many leaders in Europe and Latin America, is not a given.

Indeed, although the former president was cleared of the convictions that made him sleep 579 days in a prison in Curitiba, his name remains synonymous, for part of Brazilian public opinion, with the corruption of political elites.

Jair Bolsonaro owes much of his election to the violent rejection that Lula's Workers' Party (which ruled Brazil without interruption from 2003 to 2016) aroused in different sectors of the population, from wealthy to some popular circles, as well as in the press.

"Currently, Jair Bolsonaro is keeping a low profile because he was threatened with impeachment when he tried to organize a coup in September. But he is not buried, anything is possible," said Armelle Enders.

In the event of a defeat in the second round, the current Brazilian president, a great admirer of Donald Trump, does not intend to leave power without a fight, especially if his winner is called Lula.

In Paris, to a journalist who asked him what he would do if he was beaten by Jair Bolsonaro in the second round of the presidential election, the old warrior widened his eyes before replying "then I will only have cry" !