Genoa, rock climber overwhelmed by a wave ends up in the sea and dies

The 30-year-old man had climbed off the cliff to retrieve a rope. Saved by the vv.ff. the climbing partner got stuck on the cliff 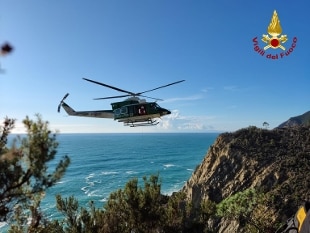 05 December 2021 A 30-year-old rock climber died after being hit by a wave while he was retrieving a rope that had fallen on the rocks.

The man was on the wall with his partner: the couple was climbing a cliff in Valletta, in the Municipality of Moneglia (Genoa).

The wave generated by the rough sea made him end up in the water and the climber, after struggling for a few minutes with the force of the sea, was sucked into the current until he disappeared in the waves.

The accident happened around 12 noon. The companion, 28, was rescued.

The girl remained stranded on the cliff for a long time, until she was reached by the Speleo Alpine River Fire Brigade personnel with the Drago helicopter and brought to safety, while mountain rescue volunteers and other Brigades were trying to approach her from the ground. of fire. It is in good condition, but in shock.

It was the girl who gave the alarm with her cell phone. The couple, born in Argentina, have been living in Genoa for some time. The accident occurred on a wall much loved by rock climbers because it was suggestive, with two rocks, called totems, in which a path for climbers was created.

A rope fell off the couple while climbing. The thirty-year-old decided to try to retrieve it and went down to the rocks, where he was surprised by a violent wave that dragged him into the sea.

When the alarm went off, the provincial road that connects Riva Trigoso to Moneglia was closed to allow rescuers to work at their best. Vehicles from the Harbor Master's Office intervened, a fire brigade motor ship as well as the brigade helicopter which, if it was not useful for identifying the body of the rock climber, facilitated the recovery of the girl who, once brought ashore, was transported to the San Martino hospital for a check-up and psychological support.

The search for the companion's body went on for hours, but as the light went down they were suspended.