British Health Secretary Sajid Javid said that all travelers coming to England will be required to take a Corona test before leaving for it, and at the same time the government added Nigeria to the travel red list. 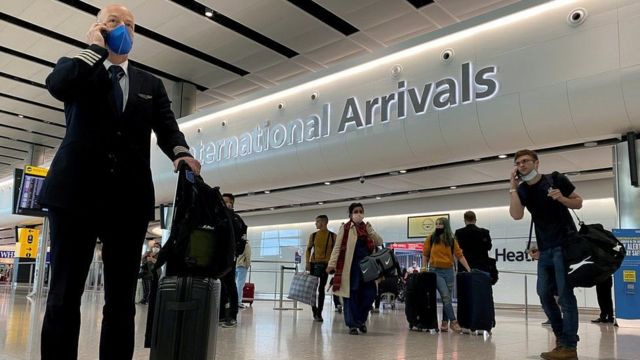 British Health Minister Sajid Javid said that all travelers coming to England will be required to take a Corona test before departing there, and at the same time the government added Nigeria to the travel red list.

And the British "PA Media" agency quoted Javid as saying that the government decided to act after receiving new data about the spread of the "Omicron" strain, which appeared in South Africa.

"Whenever we found out about this new strain, our strategy was to buy time. We always said we would move quickly if the new data required it," he continued.

"We have learned in recent days that there is a large number of increased cases of infection linked to travel with Nigeria," he added.

"There are already 27 cases in England and this number is rising. Nigeria is now second only to South Africa in terms of the number of Omicron cases," he noted.

Britain's Department of Health and Social Care later said the correct number was 21.

The governments in Scotland and Wales said they were adopting similar measures.

It is noteworthy that under the new rules, from 4 a.m. tomorrow, Monday, only British and Irish citizens from Nigeria will be allowed to enter the country and must undergo isolation in a government-run quarantine hotel.

Also, from 4am on Tuesday, any travelers coming to the UK from countries not on the Red List will be required to take a COVID-19 test before leaving their country of origin up to 48 hours before departure, regardless of vaccination.

The announcement will be seen as a sign of growing concern within the British government about the threat posed by the Omicron strain.

Despite this, the pre-departure screening has caused outrage and panic in the entire travel industry - at a time when bookings were on the rise as the Christmas holiday approached.