Brunetta: "At the study the free tampon for the youngest, vaccination obligation is not needed now"

"If the vaccination campaign proceeds with the speed of the last few days, we are in a position to avoid a return to the past and to distance learning that has produced training deficits" said in turn the Minister for Regional Affairs, Mariastella Gelmini. Ricciardi, "if it will be necessary to have a super green pass on the bus and at work". Garavaglia: "Let's go skiing with serenity" 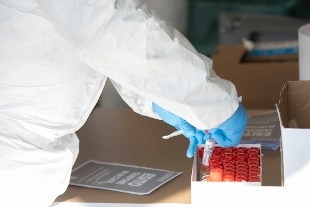 05 December 2021 "The reinforced green pass is our safety. The vast majority of Italians have chosen to get vaccinated and the last Japanese left to demonstrate in some corner of the Italian square are chased by the reproach of the people, by the cold and by loneliness". Thus, in an interview with Corriere della Sera, the Minister of Public Administration, Renato Brunetta, for whom "the strengthened green pass is working. Only thanks to the announcement effect many no vax are convinced. The number of no vaxes has more than doubled. propensity to first doses, in the last week they increased by 44%. The second effect is the reopening of many vaccination hubs that had been closed. The third is the boom of third doses. We have exceeded 400,000 and reached just under a million immunosuppressed ".

Then, the minister stresses that "at the moment the vaccination obligation is in the background, we are not in difficulty like Germany. With the super green pass we will have a totally open Christmas. No restrictions for vaccinated people for social, cultural and leisure activities and economic boom consumption. The obligation is useless at this moment, we are better than the others. Putting a decision in place that does not improve performance, produces fines that probably would not be paid and makes unvaccinated fringes angry, is useless ".

Brunetta announces that for students over the age of 12, forced to pay for tampons to go to school, "for the youngest we are studying the free tampon". But "having introduced the obligation of green passes for local public transport, completing the safety chain without interrupting mobility, is an important fact". Controls "are being organized, both on the ground and in the buses, on a random basis. And it is an element of very strong induction to responsible behavior".

"A necessary and responsible choice". This was stated by the Minister of Regional Affairs Mariastella Gelmini speaking of the strengthened green pass. "If the vaccination campaign proceeds with the speed of the last few days, we are in a position to avoid a return to the past and to distance learning that has produced training deficits", said the minister. "We have a duty not to interrupt the recovery. The economy does not need subsidies, but to grow," he added.

"On the Omicron variant there is more pessimism than necessary, of course it is very contagious but we have seen that it does not lead to serious cases". This was stated by the Minister of Tourism, Massimo Garavaglia. "With us there is an exaggeration of communication on Covid which is sometimes incomprehensible, we know that the virus exists but we can also live with vaccines and with rules that Italians apply serenely", he added.

In view of the Christmas holidays, the minister observed: "Let's go skiing peacefully, I don't understand why people continue to talk about Covid from morning to evening since Italy

. yet another variant, but you need to have a lot of serenity and common sense. The checks on the ski facilities will be carried out on a random basis, as is the case

in restaurants and pizzerias ", Garavaglia concluded.

Ricciardi, if necessary green pass strengthened also on buses and at work

" If necessary, we will have to spread the obligation of the Super Green pass. I am thinking of jobs, but also of local public transport ". Thus, in an interview with Messaggero, Professor Walter Ricciardi, consultant to the Minister of Health Roberto Speranza and professor of Hygiene". We must be vigilant about the spread of the Omicron variant in Europe, "he says, explaining that" the great contagiousness, which seems to be higher than that of the Delta, is worrying. It has a rapid spread, such as to make us fear new turbulence ".

Regarding the eventuality of the fourth dose, Ricciardi clarifies that it is "too early to be certain. First we must understand how long the protection provided by the booster lasts. And we must hope that at some point the pandemic will also be reduced in other countries. Until this happens. , and until a substantial part of the population is vaccinated, which cannot happen before 2023, we will still have to be careful. But at some point the recalls may be thinned out. The vaccines will have to cover all variants. with influenza vaccines, which are multipurpose ".

What percentage of children aged 5 to 11 need to be vaccinated to improve the situation? "I hope 90 per cent will be exceeded, a widespread information and communication campaign is needed. We must explain to parents that the wisest act to do is to protect the children: with Delta they get sick and with Omicron even more. . Furthermore, children transmit the disease to the most vulnerable. And by vaccinating them we will move towards the exit from the pandemic because we will have immunized 90-95% not of a part of the population, but of the whole ".

"We have already known since October that vaccine efficacy drops from the fifth month. This is why we are late on the third dose". Andrea Crisanti, full professor of Microbiology at the University of Padua in an interview with La Stampa states that to complete the reminders "it will take almost a year and in the meantime a problem will arise due to the expiry of the Gree Pass, rightly reduced to 9 months. Many will walk around with expired certificates. "

Regarding the duration of the third dose, Crisanti says that "Israeli data says it would totally restore vaccination, at least for six months but hopefully more". In the meantime, the contagion "grows, but the most important question is that you find a balance. England has succeeded, albeit at a high level, thanks to effective vaccine, tracking and quarantines. Italy can do it on 20-30 thousand contagions a day, also thanks to a certificate, mask and spacing ". Just the outdoor masks while the green Pass on the vehicles, according to Crisanti is "unrealistic. On transport - he explains - it would be enough to make the Ffp2 mandatory".

The travel plans of the Immaculate Conception confirm that 420,000 Italians have decided to stay in one of the 24,000 farmhouses in Italy according to Terranostra or to visit markets with local farmers' products organized by Campagna Amica along the Peninsula. This is what emerges from a Coldiretti / Ixè analysis. What is worrying - Coldiretti specifies - is the evolution of infections in traditional end-of-year destinations, from the great European capitals to more distant destinations such as the United States and Asia.

A situation that - continues Coldiretti - pushes us to wait to evaluate last minute solutions on the national territory, even if many unknowns remain.

In Italy to pay the highest price at the resumption of infections - concludes Coldiretti - risk being again the structures engaged in accommodation, food, transport, entertainment, shopping and souvenirs for an estimated cost of 4, 1 billion for tourism at Christmas and New Year before the pandemic.