Brandenburg, a farewell letter found in the house of the massacre

In the house the bodies of 5 people, including 3 children: according to some sources, a family in anti-Covid quarantine 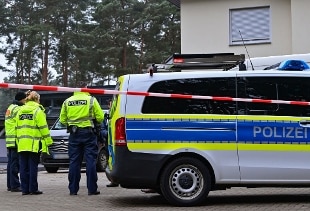 5 December 2021 According to the daily Bild, investigators have found a farewell letter in the house of Koenig Wusterhausen, where the bodies of two parents and 3 children were found yesterday morning.

The two adults were teachers in their forties. The three children were named Rubi (4 years old), Janni (8) and Leni (10). The prosecutor: "There is still no complaint against outsiders in the investigation." The investigations are proceeding with great confidentiality.

The finding on Saturday morning

A neighbor saw the dead bodies in the house yesterday morning and alerted the police around noon. According to what some of the local media write, but the news is not confirmed by the investigators, the 5 victims would be part of a family that was in anti-Covid quarantine.

The competent prosecutor has opened an investigation for multiple homicide, but an open mystery remains.

"On the corpses were found stab wounds and gunshots", so prosecutor Gernot Bantelon - "The homicide commission has been activated because it is investigating the hypothesis of a crime".

But it is still unclear - according to investigators - whether the perpetrator of the massacre was among the victims or whether the killer was someone from outside.