"Complete absurdity": why the European Parliament put forward a new condition for the "winding down" of the Nord Stream 2 project

The Nord Stream 2 gas pipeline should be closed in the event of an armed aggression by Russia against Ukraine. This was stated by the chairman of the European People's Party faction in the EU Parliament, Manfred Weber. He called on the future German government to "clearly define" the cost of Russia's allegedly planned "invasion" of Ukraine. Earlier, the head of Naftogaz, Yuriy Vitrenko, said that Ukraine opposes the certification of the Russian gas pipeline, which runs in Germany, and called on the European Commission to show a tough position on this issue. According to experts, political forces in Europe and the United States opposing the implementation of Nord Stream 2 are using the information campaign about the “invasion” of Ukraine as a political reason to stop the project. 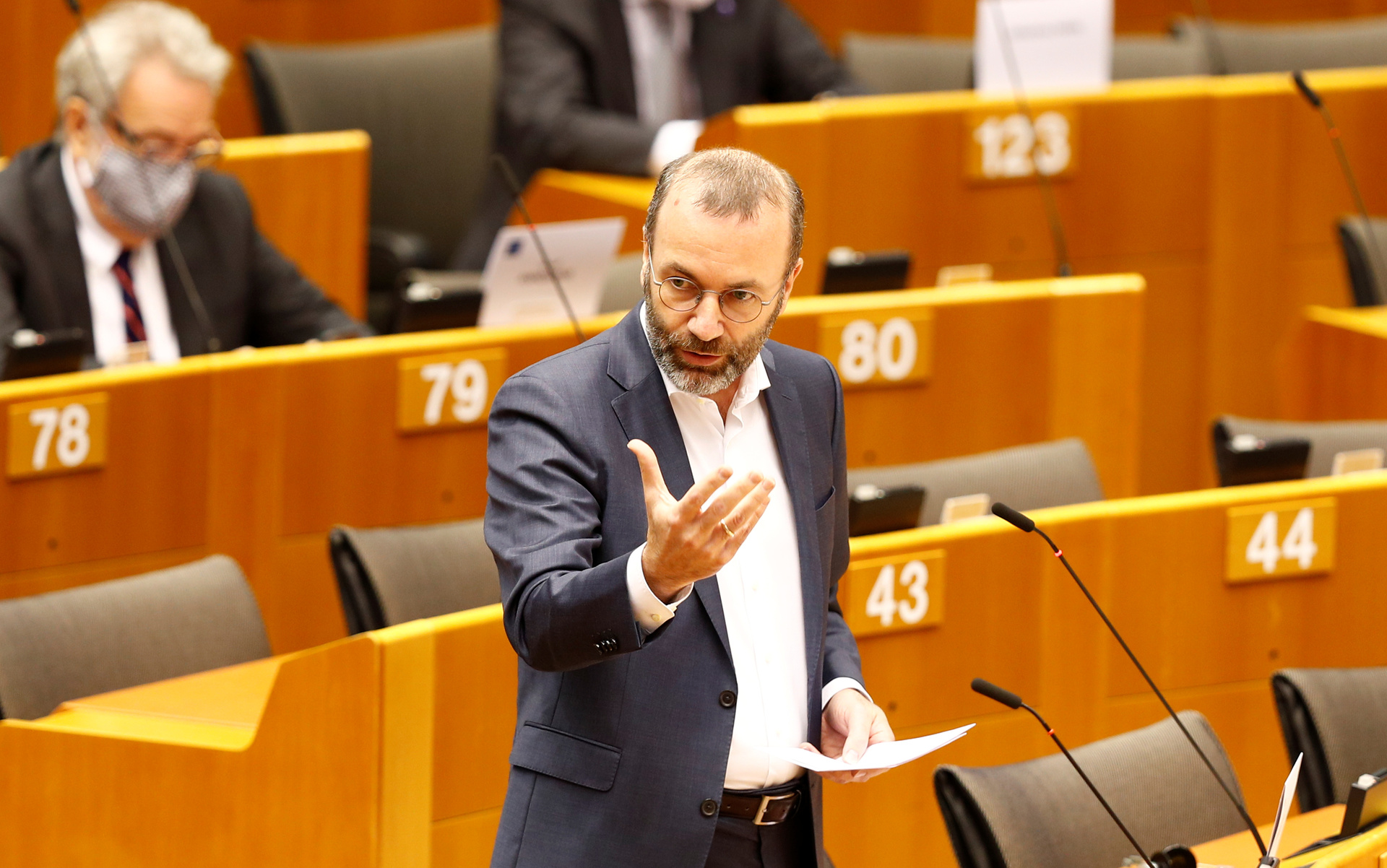 The Nord Stream 2 gas pipeline project should be phased out in the event of a Russian invasion of Ukraine.

According to Weber, the deployment of Russian troops on the border with Ukraine suggests that the threat of an allegedly impending invasion is real.

“The situation is of great concern, an aggravation of the war in eastern Ukraine cannot be ruled out,” Weber said in an interview with Bild am Sonntag.

The politician said that the escalation of hostilities should be "the end for the Nord Stream 2 gas pipeline" and called on the next German government to designate this for the Russian Federation in the event of the use of weapons against Ukraine.

“In this case, putting it (the gas pipeline -

) into operation is out of the question.

The future government should clearly set this price ... It is important that NATO made it clear that Russia's actions against Ukraine will have a high price, ”Weber said.

In an interview with RT, Igor Yushkov, an expert at the Financial University under the Russian government and a leading analyst at the National Energy Security Fund, commented on the statement of the European politician, noting that opponents of the gas pipeline are looking for any reason to prevent its commissioning.

According to Yushkov, Nord Stream 2 fully complies with the norms of international and European legislation, and you cannot just refuse it.

“And there remains the last chance how it can be stopped - only by direct sanctions from the European Union ... Accordingly, it is necessary to justify why we take and introduce these sanctions.

So they are just preparing the rationale ... Because for some reason Russia allegedly "attacks" Ukraine, "the expert explained.

Recall that the topic of the allegedly planned Russian invasion of Ukraine has been actively accelerated by the Western media since last month.

So, on November 11, the Bloomberg news agency reported that Washington had warned its European allies about the alleged imminent invasion of Russian troops into Ukraine.

At the same time, the agency referred to anonymous sources who reported that the US forecast was allegedly supported by some publicly available evidence.

Then, on November 20, the CBS News television channel reported (also citing sources and US intelligence data) that the Russian Federation allegedly plans to attack Ukraine with the onset of cold weather, which the American intelligence once again warned its European allies.

At the same time, CBS News reporters argued that "the invasion is dependent on weather conditions, but if the West does not intervene, it could happen within a few weeks."

On November 21, Bloomberg even stated that American intelligence allegedly had plans for an attack by the Russian Federation on Ukraine in early 2022.

Russia has repeatedly stated that the assertions of the Western media are unfounded and the Russian Federation is not going to attack Ukraine.

According to the press secretary of the Russian President Dmitry Peskov, "this hysteria is being whipped up artificially."

“Those who have brought their armed forces from across the ocean are accused of some unusual military activity on our territory.

That is, the United States of America.

Well, this is not entirely logical and not entirely decent, ”a Kremlin spokesman said on the Russia-1 TV channel in the Moscow.

In turn, the head of the Russian Foreign Intelligence Service Sergei Naryshkin said at the end of November that the main beneficiary of this information campaign is the US State Department.

“All this around this topic is a malicious propaganda action by the US State Department.

The State Department is pumping these fakes, this lie, and its allies, and the heads of the media and political science centers in the United States so that they multiply, multiply and multiply this lie.

And they inflated a rather big bubble around this, ”Naryshkin said, calling the publications of the American media about the“ attack ”of the Russian Federation on Ukraine“ nonsense ”.

However, Western journalists continue to spread messages about an allegedly impending "invasion", constantly referring to anonymous sources and some materials from Western intelligence services.

For example, the German newspaper Bild also, with reference to unnamed sources, published a scheme of a possible "attack" on Ukraine and announced its date: end of January - beginning of February 2022.

Against the background of this information campaign, Ukraine continues to put pressure on Europe, trying to convince it of the need to abandon the commissioning of the Nord Stream 2 gas pipeline.

According to the head of Naftogaz, Yuri Vitrenko, the decision of the German Federal Network Agency (BNA), allowing the operator of the Russian gas pipeline Nord Stream 2 AG to create and register its subsidiary in Germany, is "a mockery of EU rules."

“We are strongly against this approach.

It makes no sense to certify only the last mile, this is a mockery of EU rules, and we hope that this will not happen, ”said the head of Naftogaz in Brussels during a conference organized by EURACTIV Bulgaria.

According to Vitrenko, Kiev hopes for the tough position of the European Commission, which should apply EU norms not only to Nord Stream 2, but to all pipelines connecting Russia with the EU.

At the same time, the head of Naftogaz stressed that his country also opposes the certification of the Russian project.

“According to Ukraine's position, since Nord Stream 2 does not meet EU standards, it should not be certified.

If and when the project is brought in line with them, the conversation will be different, ”Vitrenko said.

Opposition to the energy project continues in the United States.

The author of the amendment, Republican Senator James Risch, said that putting the gas pipeline into operation would allegedly endanger the security of Ukraine.

"Remember that Nord Stream 2 is intended to replace the Ukrainian gas transportation system, which means that Russia no longer needs to worry about destroying its own infrastructure in the event of a full-scale war (between Russia and Ukraine. -

In his opinion, Nord Stream 2 will not be launched soon, so American politicians have time to take the necessary measures and prevent this from happening.

According to Aleksandr Kamkin, a leading researcher at the Center for German Studies at the Institute of Europe, Russian Academy of Sciences, an information campaign about the alleged Russian invasion of Ukraine has been launched to give an excuse for refusing to put Nord Stream 2 into operation.

“The issue of Ukraine is constantly being promoted by Russia's western partners.

Now the context of gas transit through its territory is tied to the context of the mythical Russian threat and the allegedly prepared "invasion", the expert noted.

In turn, Pavel Feldman, Deputy Director of the RUDN Institute for Strategic Studies and Forecasts, recalled that Nord Stream 2 is designed in strict accordance with international and European legislation, therefore, in order to postpone its commissioning, a new political reason is needed , which ensures the creation of the appearance of an impending "invasion" of Ukraine.

Under the pretext of ensuring the security of Ukraine, the United States, European bureaucrats in Brussels and some political forces in Germany are actively hindering the implementation of Nord Stream 2, Feldman said.

“Ukraine actually believes that it is at war with the Russian Federation, but at the same time wants to make money on economic cooperation with the aggressor country, as it calls Russia.

This is complete absurdity, ”the expert noted.

At the same time, the new German government, in which anti-Russian politicians are present, will certainly take advantage of the new pretext to delay or hinder the launch of the gas pipeline, Feldman said.

“Taking into account who comes to power in Germany today, it is obvious that there will be no quick commissioning of Nord Stream 2.

And this story is somewhat reminiscent of the process of obtaining a license for the Sputnik V vaccine from the WHO.

Everything corresponds to the technical documentation, everything is safe, everything is absolutely legal, but, on the other hand, there are hidden political obstacles that force the project to be delayed, "the RT interlocutor concluded.