Via video link: the conversation between Putin and Biden will take place on December 7

The conversation between Vladimir Putin and Joe Biden via video link is scheduled for December 7, the exact time has not yet been determined. This was announced by the press secretary of the Russian leader Dmitry Peskov. As pointed out earlier by the aide to the President of the Russian Federation Yuri Ushakov, the heads of state are expected to discuss a wide range of issues, including the internal Ukrainian crisis. Meanwhile, reports continue to appear in the United States that Russia is allegedly preparing for an "invasion" of Ukraine. Responding to similar publications by the American media, Foreign Ministry spokeswoman Maria Zakharova said that Moscow was impressed by the "scale of impudence and lies." 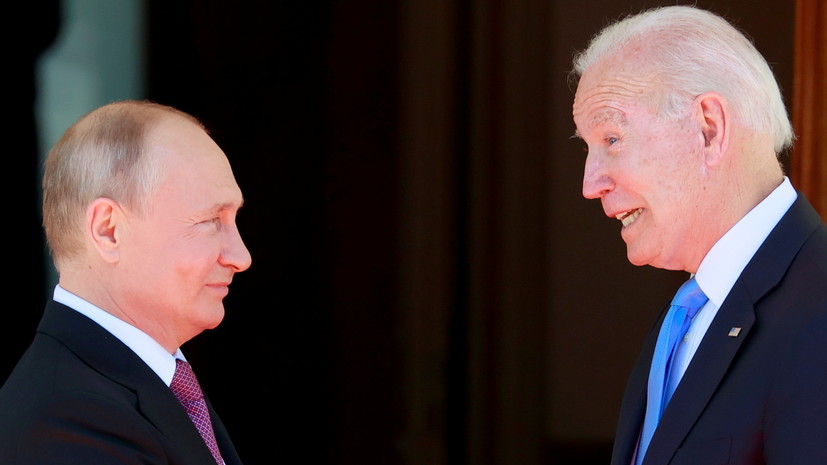 On Tuesday, December 7, talks between the presidents of Russia and the United States of America will take place.

This was announced by the press secretary of the Russian leader Dmitry Peskov.

Vladimir Putin and Joe Biden will communicate via video link.

The presidents themselves will determine (time. -

) ", - said Peskov, whose words are quoted by RIA Novosti.

On December 3, Yuri Ushakov, Assistant to the President of Russia for International Affairs, said that Moscow was "working with Olympic calmness" on the upcoming contact between the leaders of the two powers.

“I hope our American colleagues understand how important and necessary this contact is ... It is necessary not only for us, but also, I hope, for the Americans,” he said.

According to him, Putin and Biden are likely to touch upon the implementation of the idea of ​​holding a summit of permanent members of the UN Security Council, which was previously proposed by the President of the Russian Federation.

Also, the heads of state can discuss the internal Ukrainian crisis, the situation in Afghanistan, Iran, Libya, the problems of the pandemic, the fight against climate change and the oil market.

“The agenda, it seems to me, is obvious.

This will be such an important contact in the continuation of the Geneva talks.

Naturally, issues related to the implementation of the Geneva accords will be touched upon.

If on major issues, it is clear that the unsatisfactory situation in bilateral affairs will be affected in one way or another, topical issues on the international agenda, "- Assistant to the President of Russia for International Affairs.

Recall that the first personal meeting between Putin and Biden as presidents of Russia and the United States took place in Geneva on June 16. The talks, together with a break, lasted about three and a half hours. The leaders of the two countries discussed cybersecurity issues, and also agreed to begin consultations on strategic stability issues at the interdepartmental level. As Russian Foreign Minister Sergei Lavrov later noted, the meeting was held in a "frank and businesslike manner."

Earlier, the Associated Press and The Washington Post, citing data from anonymous officials in the US administration, as well as representatives of the intelligence community, published materials claiming that Russia allegedly intends to carry out a military invasion of Ukraine in early 2022.

At the same time, up to 175 thousand soldiers will be involved.

Now, according to American intelligence, there are about 70,000 servicemen near the Russian-Ukrainian border.

Along with this, US President Joe Biden said that Washington "has long been aware of Russia's actions."

The head of the White House also expects a "long conversation" with Vladimir Putin on Ukraine, stressing that he "does not recognize anyone's red lines" on the security issue of this state, Ino TV reports.

The movement of Russian troops across the territory of the Russian Federation is an internal affair of the state.

This was stated by the official representative of the Ministry of Foreign Affairs of Russia Maria Zakharova, commenting on the reports of the American media that the Russian side allegedly concentrated a significant military contingent near the border with Ukraine and is preparing for an invasion.

“The Russian armed forces on Russian territory are the legal right of a sovereign state.

Based on NATO's actions in the region, the American press should be concerned about the aggressive actions of not Russia, but the United States, ”Zakharova said.

She also pointed out that Washington is conducting "a special operation to escalate the situation around Ukraine, shifting responsibility to Russia."

“It is based on provocative actions near the Russian borders, accompanied by accusatory rhetoric against Moscow.

Only the scale of impudence and lies is impressive, "added the official representative of the foreign ministry.

Earlier, the Russian leader called the creation of a threat to Russia as a red line in the situation with Ukraine.

According to him, if strike systems or hypersonic weapons are deployed on Ukrainian territory, Russia will have to "create something similar in relation to those who are so threatening."

“The creation of such threats for us is the“ red line ”.

I hope it doesn't come to that.

I hope that a sense of common sense, responsibility both for their countries and for the world community will still prevail, "Putin said on November 30 during the Russia Calling! Forum.

"Nobody is going to attack Ukraine"

As Adalbi Shkhagoshev, a member of the State Duma Committee on Security and Anti-Corruption, noted, reports of an allegedly impending Russian aggression against a particular country are a win-win agenda for the US military lobby.

“It will go on forever: first at the end of the year, then at the beginning of the year, respectively, in January this will not happen - they will already call April, May and so on.

After Afghanistan was lost (where hundreds of millions of dollars were pumped in), when they left, the question just arose inside the United States: why do we need to spend so much money on defense?

Accordingly, the agenda completely spread to Ukraine, allegedly on the border of Ukraine and the Russian Federation, the tension is such that huge amounts of money are required, "he said in a conversation with RT.

Also on russian.rt.com "Another round of ideological struggle": how Russia reacts to statements about the "invasion" of the Russian Federation in Ukraine

In turn, Sergei Tsekov, a member of the Federation Council Committee on International Affairs from the Republic of Crimea, also pointed out that the American side, together with Ukraine, is aggravating the situation, which is created out of speculation.

"Nobody is going to attack Ukraine, we know that," the interlocutor of RT explained.