Parents of the 15-year-old who killed 4 high school students arrested. Prosecutor: "They knew about the gun"

The couple, who had left the city of Oxford, are accused of manslaughter "for giving the teenager the opportunity to use a firearm" 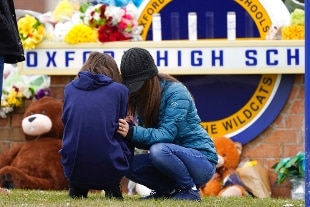 The place of the massacre (Ap)

December 04, 2021 - Parents of 15-year-old accused of killing four high school friends in Michigan were arrested hours after being charged with manslaughter.

On the run from the city of Oxford, the police offered $ 10,000 as a reward to receive useful information leading to their capture.

The two were found in an industrial building along Bellevue Street, about 60 kilometers from the scene of the shooting in Oxford, near the place where their car was found in the past few hours.

A Detroit Police Department spokesperson reported to the Washington Post, Jennifer and James Crumbley were arrested in Detroit after their car was located in a residential neighborhood in the city. The vehicle would have been reported by a local contractor.

Ethan, 15, was indicted for first degree murder, terrorism and seven attempted murders. The couple, on the other hand, will have to defend themselves from the accusation of manslaughter for having left the teenager the possibility of using a firearm. The prosecutor said the teachers had called them on two occasions to report the boy's worrying behavior in the days before the shooting, including searching for ammunition online during class, and that last Tuesday, a few hours before the shooting, the parents " they opposed the idea of ​​the son leaving school "and did not tell the school authorities that the boy had a gun. In fact, the prosecutor showed a post published on Facebook by his mother,

Jennifer Crumbley, bragging about her son's Christmas gift last week, a 9mm pistol, called "my new beauty" by the boy on social media.