Photographic report by our reporter Liu Jinmeng   At present, there are more than 30 million vocational school students nationwide. In the past, vocational education is often the second choice after ordinary higher education, with the stereotype of "being worse than others". However, in recent years, with the country’s increasing demand for skilled talents and the advancement of reforms in the 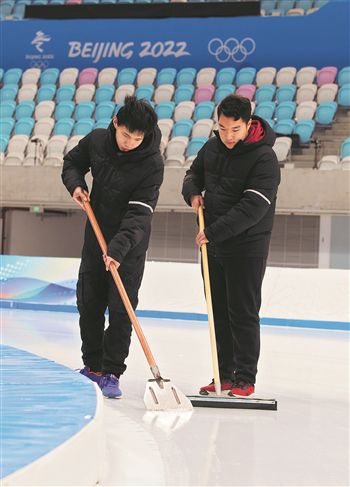 At present, there are more than 30 million vocational school students nationwide.

In the past, vocational education is often the second choice after ordinary higher education, with the stereotype of "being worse than others".

However, in recent years, with the country’s increasing demand for skilled talents and the advancement of reforms in the construction of industrial workers in the new era, vocational education has also undergone a quiet transformation. More and more vocational education graduates have become "Top students" in the job market.

Recently, a reporter from "Workers' Daily" walked into two vocational colleges in Beijing to record the growth story of vocational school students.

On December 1, there are 65 days before the opening of the 2022 Beijing Winter Olympics.

In the "Ice Ribbon" of the National Speed ​​Skating Stadium, the students of the Winter Heating, Ventilation and Air-Conditioning Engineering Technology (Double Ice Arena Order Class) of the School of Mechanical and Electrical Engineering of Beijing Electronic Technology Vocational College (hereinafter referred to as Beijing Electric Power Research Institute) are on the ice Operation.

They were already familiar with the situation at the National Speed ​​Skating Stadium. From the beginning of enrollment, they knew that they would contribute to the ice making work of the Beijing Winter Olympics in the future.

Sui Xinyu, born in 2001, refused his parents' suggestion to study abroad when he graduated from high school, and went to the Beijing Electric Power Research Institute.

"They didn't understand my choice at first, but I felt that the order class cooperating with the Winter Olympics was an opportunity, so I signed up. Now they say that their son is working for the Winter Olympics when they meet." Learn theoretical knowledge and practice in school When following the top international ice masters, participating in the preparation of domestic and international competitions... Sui Xinyu said that in the past few years, he has not only learned technology, but also broadened his horizons.

Related companies generally intervene in the college's teaching plan a year or even earlier, and students are taught by "dual tutors" by full-time teachers and corporate instructors.

Companies also use this time as a period of oriented training and internships, so that students can quickly change their identities and be qualified for positions after graduation.

Sun Xiaotong was in the laboratory at Beijing Yizhuang International Biomedical Technology Co., Ltd. on November 29.

Due to the cooperation between Yizhuang Biomedical Park and Beijing Electric Power Research Institute, in November last year, she followed an off-campus instructor to practice in the Biomedical Park.

"This kind of order-based class for the integration of industry and education has started in 2012. We will do it together from curriculum design to internship. On December 2, a professor who has worked in a major American pharmaceutical company for more than 30 years came to the school and gave the class. "Said Gong Yujie, general manager of Beijing Yizhuang International Biomedical Technology Co., Ltd.

Sun Xiaotong and his family are very satisfied with being able to work in a state-owned enterprise.

There are undergraduates and masters from Hong Kong who work with her.

Sun Xiaotong is also working hard on her academic qualifications. Now she is working while studying for a part-time college promotion at China University of Petroleum. "We also have a very good senior, and he got a PhD at Tsinghua University all the way."

Compared with Sun Xiaotong's stable job, Wang Weiye chose to start his own business after graduating from vocational high school.

Today, he has hundreds of thousands of fans on the Douyin platform. By selling baking courses online, the company's monthly turnover can reach six figures.

interest is the best teacher.

In 2015, Wang Weiye was promoted to Beijing Changping Vocational School and chose Western Food Cooking as a major. After studying for a period of time, he found that he prefers baking.

After that, Mr. Cao took him to participate in various baking competitions.

In 3 years, he won the national third place of the World Bread Ambassador China Youth Classic and the top four of the 45th World Skills Competition in Beijing.

Affected by the family environment, Wang Weiye does not believe that step-by-step college entrance examinations and work are the only path to success.

"I was very rebellious at the time. If I went to Pugao, I might not have good results, but I like baking. It is a rare opportunity to study with the master I admire." The 22-year-old Wang Weiye entered the society early and spoke with a younger age than his peers. People are more mature and stable.

While he tied up his long hair, he instructed the younger brothers and sisters to prepare the live broadcast equipment.

"I kept my long hair just to show my maturity, because netizens would ask me how I look so small." Because of his excellent baking skills, the school opened a studio for him after graduation.

The kitchen where he used to go to class has now become a place where he shoots vibrato videos and teaches his juniors and sisters.

At present, there are 11,300 vocational schools in my country with 30.88 million students, and the world's largest vocational education system has been established.

However, there is a large gap of skilled talents in key fields in my country, and it is estimated that the gap will be close to 30 million in 2025.

On the morning of November 26th, Liu Zhijun (second from left), a teacher from Beijing Electronic Technology Vocational College, gave a class to students on a Boeing 737-300.

"Three hundred and sixty trips, you will be the champion. Find a path that suits you to become a useful talent." On the morning of November 26, Liu Zhijun, a teacher from Beijing Electric Power Research Institute, who had just finished the class for Air China’s order class students, said .

This year is the sixth year that Liu Zhijun has transferred from the army to the school. Before he transferred, he was engaged in aircraft maintenance work.

Not long ago, his major formally became independent, and the School of Aeronautical Engineering of Beijing Electric Power Research Institute was established.

Liu Zhijun is the head of the aviation maintenance department. He is full of expectations for the prospects of vocational education. "The country needs scientists and workers. I am very optimistic about the prospects of vocational education. Major airlines have also signed orders for talent training agreements with us. Our students graduate and find employment. The rate can reach 98%."