The United Arab Emirates and the French Republic affirmed, in a joint statement issued yesterday, their commitment to support efforts to promote peace and stability at the regional and international levels, and the two countries stressed that political processes and building bridges of communication through dialogue still represent the way. 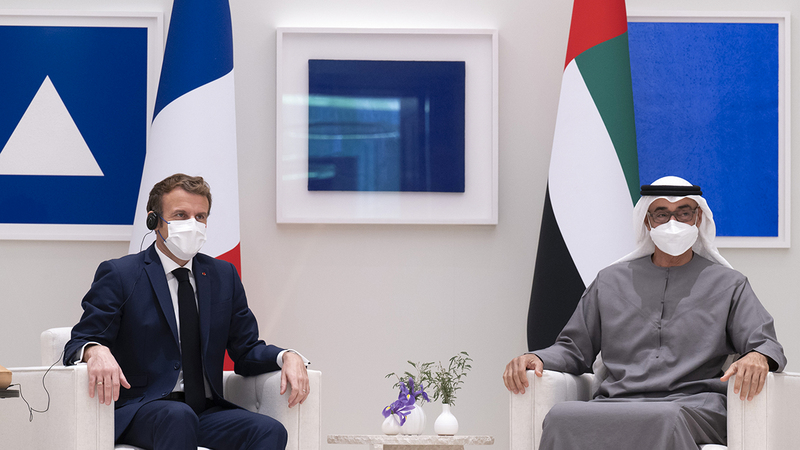 Joint statement: Dialogue is the best way to achieve sustainable solutions to conflicts

In a joint statement issued yesterday, the United Arab Emirates and the French Republic affirmed their commitment to support efforts to promote peace and stability at the regional and international levels, and the two countries stressed that political processes and building bridges of communication through dialogue still represent the best way to achieve sustainable solutions to conflicts and disputes.

The two sides also stressed that linking stability and prosperity is a priority in order to achieve regional peace and security.

The statement referred to the exceptional achievements made through the strategic partnership between the UAE and France in the past 30 years, and affirmed their commitment to strengthening this relationship and paving new avenues for its future.

The joint statement issued by the United Arab Emirates and the French Republic, on the occasion of President Emmanuel Macron's visit to the country, stated that President Emmanuel Macron congratulated the UAE on the occasion of the "Union Day" and its golden jubilee, which falls on December 2, and praised the achievements made by the country during the 50 years. In addition to his congratulations on the selection of the UAE to host the COP28 Conference of Parties in 2023, and stressing the importance of the French Republic and the UAE seizing this opportunity to work together in addressing the global threat posed by climate change, in addition to completing the implementation of the rules of the Paris Agreement and the financial mobilization of the most developing countries affected by climate change.

The statement indicated that His Highness Sheikh Mohamed bin Zayed Al Nahyan, Crown Prince of Abu Dhabi and Deputy Supreme Commander of the Armed Forces, expressed his aspiration to work alongside France and the international community to push global efforts to confront the repercussions of climate change and protect the environment, in addition to creating a more sustainable economic future.

The statement affirmed the two countries' commitment to directing efforts towards supporting developing countries to achieve the goals of the Paris Agreement, in addition to increasing support for the International Renewable Energy Agency (IRENA) and the International Solar Energy Alliance.

The two countries also expressed their desire to work side by side during the UAE's non-permanent membership in the UN Security Council for the period (2022-2023), and during France's presidency of the European Union, with a focus on a number of priorities, including promoting stability, peace and prosperity, empowering women, and benefiting from it. of the potential for technological innovation.

The statement noted the exceptional achievements made through the strategic partnership between the two countries in the past 30 years, and the two countries' affirmation of their commitment to strengthening this relationship and paving new ways for its future. One of the most important pillars of this strategic partnership was the defense agreement signed in 1995, which was renewed in 2009, which It has contributed significantly to achieving the UAE and French security priorities, by enhancing regional stability, enhancing maritime security, and enabling the confrontation of terrorism, especially against ISIS.

The two sides reiterated the strengthening of this partnership, by supplying France to the UAE Air Force with 80 Rafale combat aircraft for the UAE Air Force squadron, in addition to 12 Caracal H225 helicopters, including armament, training and spare parts. Contracts 16.6 billion euros.

The statement added that His Highness Sheikh Mohamed bin Zayed Al Nahyan congratulated President Macron on the success of the international conference on Libya, which was held in Paris recently. His Highness expressed his appreciation for the various French diplomatic initiatives in the region and their positive impact in encouraging dialogue and reducing tensions.

The two sides also expressed their hope for the successful organization of the Libyan elections within the agreed time frame, and the withdrawal of all mercenaries, fighters and foreign forces from Libya.

The statement stated that His Highness Sheikh Mohamed bin Zayed Al Nahyan and the French President affirmed their commitment to support efforts to promote peace and stability at the regional and international levels.

They stressed that political processes and building bridges of communication through dialogue still represent the best way to achieve sustainable solutions to conflicts and disputes.

The statement touched on the issue of the Iranian nuclear program talks, and the importance of reaching a negotiated solution.

The joint statement noted the UAE's vision to focus on de-escalation and cooperation to achieve shared prosperity in the future. In this context, President Macron renewed his congratulations to His Highness Sheikh Mohamed bin Zayed Al Nahyan, for the importance of the "Abrahamic Agreement" as a bold step towards achieving peace and stability in the region .

The statement referred to the success of the Louvre Abu Dhabi Museum as the main symbol of the strategic cultural cooperation between the two countries and the lasting legacy of the close bilateral relations. .

According to the statement, the two countries stressed the importance of the agreements signed by the two sides worth more than 15 billion euros to strengthen the strategic investment partnership between the UAE and France, which targets priority sectors and common interests, including the sectors specified in the economic program "France 2030", such as renewable energy, innovation, technology and revolution. The Fourth Industrial City, Mubadala Investment Company and BPI France signed an extension of their joint investment program with a total amount of four billion euros, which will be employed in line with the current strategy of the French-Emirati Fund and the Innovation Partnership. Mubadala Investment Company also signed a memorandum of understanding with the French Ministry of Economy, Finance and Recovery, to invest in French funds with a total value of 1.4 billion euros.

According to the statement, Masdar, one of the world's fastest growing companies in the renewable energy sector, and ENGIE, a leading global low-carbon energy company, signed a strategic alliance agreement to develop a joint venture in green hydrogen in the UAE. United Arab Emirates. The two companies also seek to develop projects in the region with a capacity of no less than 2 gigawatts by 2030, with a total investment of about 4.4 billion euros.

ADQ Holding, through its portfolio companies, signed an investment agreement with the French Ministry of Economy, Finance and Recovery, with a total value of about 4.6 billion euros, to explore investment opportunities in the fields of transport, logistics, food, agriculture, clean energy, life sciences and health care with France. The Abu Dhabi National Oil Company “ADNOC” and “Total Energy” also signed a strategic cooperation agreement in areas of mutual interest, including carbon capture and storage, low carbon hydrogen, the development of human cadres, and oil and gas exploration operations in the Emirate of Abu Dhabi. The strategy has the potential to open up new and sustainable growth opportunities for both companies.

Borouge also awarded a contract to Technip Energy, in partnership with Target Engineering, to build a world-class ethane cracker for the Borouge 4 expansion project in Ruwais. One location in the world, ensuring a long-term sustainable supply of basic materials for vital sectors in both the UAE and the global economy.

The statement indicated that the two sides signed a memorandum of understanding between the UAE Ministry of Industry and Advanced Technology and the French Ministry of Economy, Finance and Recovery in the field of advanced industries and technology. In the field of space, the Mohammed bin Rashid Space Center and the National Center for Space Studies signed a "letter of intent" to discuss ways of cooperation in exploring the lunar surface, through the Emirates mission to explore the moon "Rashid-2 Lunar Module", where the Mohammed bin Rashid Space Center intends to develop the lunar module. "Rashid - 2", while the National Center for Space Studies expressed its interest in providing a new generation of multispectral camera equipment and supporting the vehicle's tests.

The statement said that His Highness Sheikh Mohamed bin Zayed Al Nahyan, Crown Prince of Abu Dhabi and Deputy Supreme Commander of the Armed Forces, and President of the French Republic Emmanuel Macron stressed the importance of what has been accomplished by the International Alliance for the Protection of Heritage in Conflict Areas (ALIPH) since 2018 to protect and rehabilitate heritage. and cultural heritage in conflict areas, and reaffirmed their common commitment in connection with the second donors’ conference to be held in Paris in early 2022. They expressed their joint support for multilateral health initiatives such as the COVACS Initiative and UNITED.

• The two sides agreed to deepen bilateral cooperation in combating terrorism and extremism.

• The two countries affirmed their commitment to directing efforts towards supporting developing countries to achieve the goals of the Paris Agreement.

Develop cooperation in the field of sustainability

The joint statement signed by the United Arab Emirates and the French Republic indicated that the Emirates Nuclear Energy Corporation and the French Electricity Company “EDF” had signed a memorandum of understanding for cooperation in the areas of low-carbon hydrogen, in addition to high-voltage transmission networks, localization and industrialization, as well as research and development along with The signing of a memorandum of understanding between Paris Europlace and Abu Dhabi Global Market, aimed at developing cooperation in the field of sustainability and financial technology, in addition to financial innovation.

The joint statement stated that, recognizing the importance of the United Arab Emirates and the French Republic of the importance of enhancing food security, ensuring the sustainability and resilience of global food supply chains, and promoting the use of modern agricultural technologies and innovative solutions, the UAE Ministry of Climate Change and Environment and the French Ministry of Agriculture and Food signed a memorandum of understanding to enhance cooperation in developing food systems sustainable and flexible in both countries. To achieve this goal, the two sides agreed to facilitate bilateral trade in agricultural and food products by enhancing the flow of supply chains and encouraging importers and distributors in both countries to explore partnership opportunities. They also agreed to cooperate in developing sustainable agricultural production with a focus on innovation and adoption. Modern agricultural production methods.