Nehammer takes over as Austria's chancellor

It will be Karl Nehammer, the Austrian Minister of the Interior, who will take over the post as the country's Chancellor. Several reshuffles are also being made within the government, after the former corruption chancellor Sebastian Kurz announced that he was leaving politics. 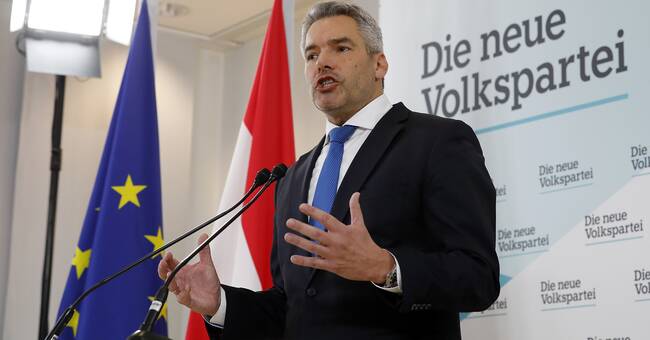 Karl Nehammer was appointed party chairman by the conservative ÖVP on Friday and thus he will also be the new federal chancellor in Austria, reports the news agency APA.

Although he must first be approved and sworn in by the president, it is mostly a formality.

He thus replaces Alexander Schallenberg as chancellor, who in turn has held it since Sebastian Kurz resigned in October after suspicions of involvement in a corruption scandal arose.

Schallenberg will thus return to the role he previously held, as Minister of Foreign Affairs in the coalition government between ÖVP and the Green Party.

That he will not continue as chancellor was clear already on Thursday, when Sebastian Kurz, who has so far led ÖVP, announced that he is leaving politics.

The person who takes over as party leader in ÖVP should also be allowed to be chancellor, Schallenberg reasoned.

More changes are being made among ÖVP's ministerial posts following Kurz's announcement.

Finance Minister Gernot Blümel, one of Sebastian Kurz's close allies, also announced on Thursday that he was resigning.

He will be replaced by Magnus Brunner, and the Ministry of the Interior will take over Gerhard Karner.

The Minister of Education, Heinz Fassmann, is also leaving, and will be replaced by Martin Polaschek.

Only 35-year-old Kurz has a ten-year career in top Austrian politics.

That he has now decided to leave it has, among other things, to do with the corruption scandal.

According to the investigators, Kurz and nine other people are suspected of having run a scheme since 2016 in which fake invoices to the Ministry of Finance paid for hairdressed opinion polls that would speak in Kurz 'favor.

These surveys must then have been rewritten in the newspaper Österreich, in exchange for lucrative advertising contracts.

The accusations caused Sebastian Kurz to resign as Federal Chancellor, but he continued to remain as party leader and ÖVP's group leader in the National Council.