Expo 2020 Dubai hosted an official celebration to launch the Expo’s fiftieth anniversary celebrations, at the Nations Platform in Al Wasl Square, in the presence of Sheikh Nahyan bin Mubarak Al Nahyan, Minister of Tolerance and Coexistence, Commissioner-General of Expo 2020 Dubai, and Minister of State for International Cooperation manager 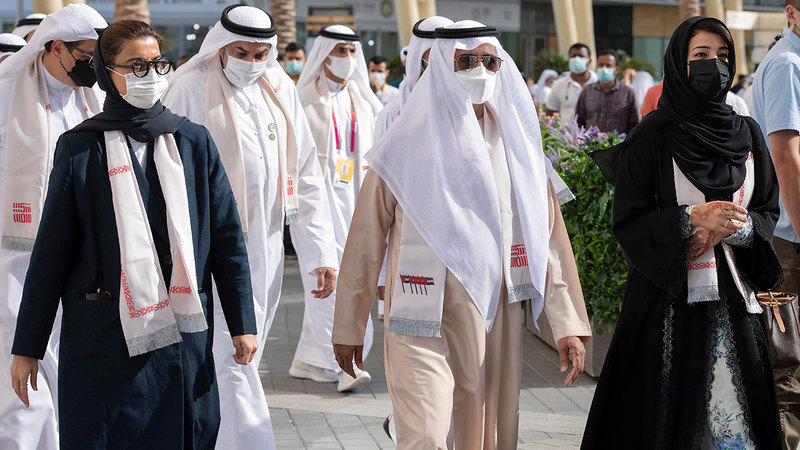 Nahyan bin Mubarak: The UAE sends messages of peace and love to the world in word and deed

After the flag-raising ceremony and the playing of the country’s national anthem, Sheikh Nahyan bin Mubarak delivered a speech in which he said that “50 years ago, on this day, history opened a new page, the letters of which were written by great leaders and an authentic people, whose roots extend deep into human civilization, and today. We gather in this place, which bears witness to the greatness of the civilizational and human achievement that the UAE has achieved, and the credit for that is due, after God, the Blessed and Exalted, to the wise and wise leadership, and to the determination and determination of its loyal sons.

He added: “On this historical anniversary, we express with great pride these strong feelings towards our country, the UAE, and we remember with all thanks, appreciation and gratitude the key role in achieving all of this, for the great leader and wise founder, the late father Sheikh Zayed bin Sultan Al Nahyan, May God reward him. He had a clear vision for the future, stemming from his national culture and insightful wisdom. He founded this pioneering country and established this successful union. He was a model and role model in assuming responsibility and dedication to serving the country. He was, may God have mercy on him, a supporter of truth and justice. He always works to find peaceful solutions to conflicts in the world, and is keen to ensure that the UAE takes its proper position on the world map.

Sheikh Nahyan bin Mubarak continued: "On this occasion, we are also proud and proud of the wise leadership of His Highness Sheikh Khalifa bin Zayed Al Nahyan, President of the State, and his brother, His Highness Sheikh Mohammed bin Rashid Al Maktoum, Vice President, Prime Minister and Ruler of Dubai, And his brother, His Highness Sheikh Mohamed bin Zayed Al Nahyan, Crown Prince of Abu Dhabi and Deputy Supreme Commander of the Armed Forces, and their brothers, Their Highnesses Sheikhs, members of the Supreme Council of the Union, rulers of the Emirates, we are proud and proud of their role in achieving progress and prosperity in the country, and their continuous efforts for the advancement of the Emirates, in all sectors and various fields.

He stressed that "thanks to our wise leadership, and thanks to the capabilities of the sons and daughters of the Emirates, who are keen to make their country always at the forefront and the forefront among the countries of the whole world, as well as thanks to the glorious history of our beloved country, and an immortal national, Arab and Islamic heritage, and what is available to it, praises God, from well-established institutions, and a confident outlook towards the future, as we celebrate the fiftieth anniversary of the Union, we feel hope and optimism, and that we are in front of broad and renewed prospects for fruitful national work. We, praise be to God, are a country that always sends to the world, by word and deed, messages of peace and love, embodied in the UAE’s pioneering model of tolerance, progress and development. And it continues to add every day more global achievements, as 192 countries gathered for the first time globally(Expo 2020 Dubai), in very delicate circumstances in the human march, we have presented the world with new standards of success and excellence.”

Sheikh Nahyan bin Mubarak said: "Today we are entering a new stage of achievements, driven by our belief in the capabilities of our children and the wisdom of our leaders, and our adherence to the values ​​of human brotherhood. We extend our hands to the peoples of the whole world, to work together to achieve prosperity and prosperity, and spread hope in the hearts of all, and we say We are heading towards the next 50 years, with determination in our hearts, and in our minds enlightened thought, with the help of God for us, and we will repeat it always and forever: I fortified you in the name of God, my homeland.”

At the conclusion of the official celebration, a group of school students presented an artistic show on patriotism, which was well received by the audience and visitors.