The Ethiopian army announced the end of the danger from the capital, Addis Ababa, after retaking several areas in the north of the country, and confirmed that its forces were advancing deep into the Amhara region, while the Tigray Liberation Front admitted its retreat. 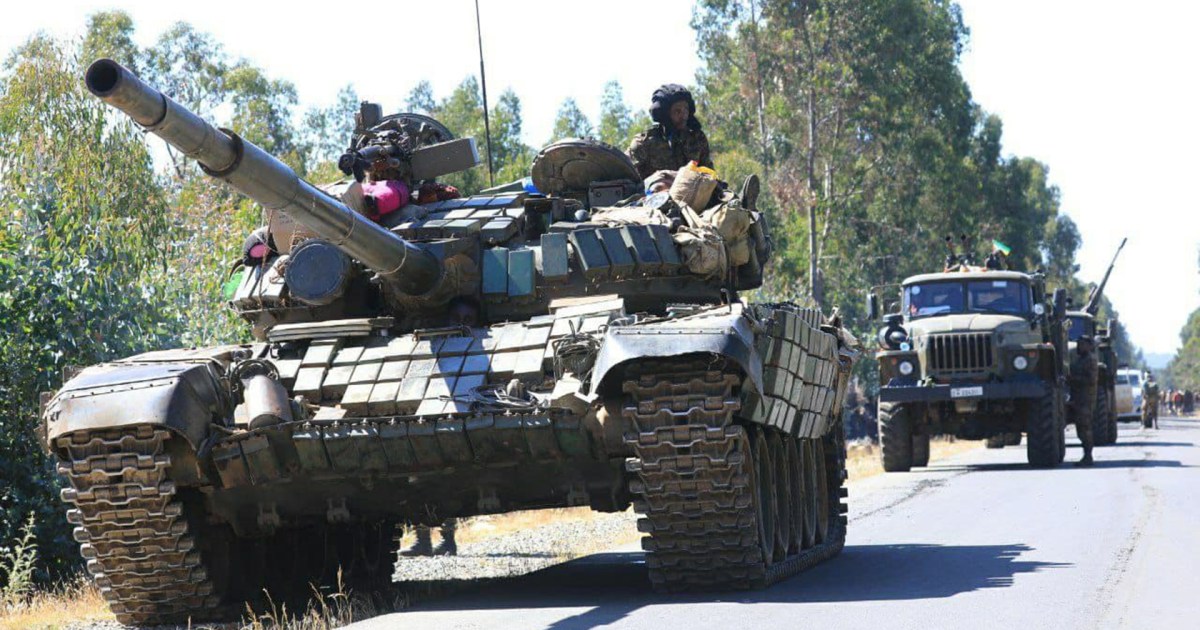 On Thursday, the Ethiopian army announced that the capital, Addis Ababa, had been removed from danger, after recapturing several areas in the north of the country, and confirmed that its forces were advancing deep into the Amhara region.

While the Tigray Liberation Front has acknowledged its decline, the United Nations has warned that sectarian violence threatens to divide Ethiopia.

Ngusi Talahun, a military commander in the town of Shawarbet in Showa Governorate (220 kilometers northeast of Addis Ababa) told Al Jazeera that the military threat around the capital and strategic roads has been completely removed, and that government forces have taken full control of Showa Governorate.

Talahoun added that government forces are currently advancing towards towns deep in the Amhara region, as part of large-scale military operations led by Prime Minister Abi Ahmed himself.

In a new video of him from the battle fronts broadcast on state television today, Thursday, Abiy Ahmed called on the Tigray Front to surrender because it was the only option after describing it as the military defeat it had suffered, and the Ethiopian Prime Minister said that the army’s morale was high, promising to repeat what he described as the victories that were achieved in the east and west of the country. in other regions.

This development comes a day after the Ethiopian forces took control of the city of Lalibela, which is located in Amhara, and includes ancient rock-hewn churches listed on the UNESCO World Heritage List, and is a sacred site for millions of Ethiopian Orthodox Christians.

This comes after the army regained all the areas that the anti-government factions entered in the Afar region (northeast).

The militants of the Tigray Front, who are allied with other anti-government factions, had earlier captured the town of Shawarbet in Showa governorate, which made them approaching Addis Ababa before the government forces regained control of it.

In its first official comment, the Tigray Front indicated that it had tactically withdrawn from those areas in order to carry out "decisive strategic attacks", and said that the battle was about to end, and that no one had the ability to push its fighters back.

The director of the Amhara Government Communications Office, Gezacho Muluneh, stated that the Ethiopian forces began combing the pockets of the remaining Tigray Front fighters after taking control of the cities of Lalibela in Amhara and Shawarbet in Showa.

Muluneh said Ethiopian troops are advancing from the Amhara towns of Baty, Waldia and Desi.

The Tigray Front was planning to advance from Amhara in the south towards the capital, or advance east and threaten the main supply route linking Ethiopia with Djibouti, but the recent gains of the Ethiopian army forced it to retreat, and the front complained to the United Nations about what it described as the entry of non-African countries into the war line.

On the other hand, a spokesman for the Tigray Liberation Front said that the Ethiopian forces bombed the Tekezi hydroelectric dam in the region.

But the Ethiopian Electricity Company, which is responsible for the dams, denied this, describing it as a false claim, and warned in an official statement against operating the dam's power station by people who do not have enough experience.

Satellite images captured yesterday morning, Wednesday, showed the effects of destruction in a sub-area of ​​the electricity generators of the Tekzi Dam, but without specifying whether this was caused by targeting or an ordinary fire.

The danger of partitioning Ethiopia

On the humanitarian front, the United Nations warned today, Thursday, that sectarian violence threatens to divide Ethiopia, and indicated that it fears a repetition of the scene of chaos at Kabul Airport in Addis Ababa.

The International Organization said that about 26 million Ethiopians need assistance, including 9 million people who depend on food rations, most of them from Tigray region, amid a high rate of malnutrition.

She also stressed that the continuation of the conflict and its extension to the regions of Amhara and Afar caused the displacement of thousands, while drought and locusts push the situation further to the edge of the abyss.

For his part, the UN Humanitarian Coordinator, Martin Griffiths, described Ethiopia as the most worrisome on the humanitarian front.

Meanwhile, Agence France-Presse reported that the European Union has asked its non-essential staff to leave Ethiopia.

In turn, the US Embassy in Addis Ababa renewed its call on American citizens to leave Ethiopia due to the deteriorating security situation in it.

The embassy said, in a tweet on Twitter, that American nationals have multiple options to travel on commercial flights from Bole International Airport in the Ethiopian capital, and urged them to register in the smart traveler registration program.

As part of the reactions to these developments, the Chairperson of the African Union Commission, Moussa Faki, denounced the continuation of hostilities in Ethiopia.

He said in a tweet on Twitter that these hostilities are still continuing while the Commission talks with the parties to the conflict, stressing that the only way to resolve the conflict is an immediate ceasefire and political dialogue.

As for the United States, through its Assistant Secretary of State for African Affairs, Molly Faye, it expressed its concern over what it described as the atrocities in Ethiopia.

Molly said Washington does not take sides in a conflict that has caused dire consequences for hundreds of thousands of people.

She added that the United States is working hard to stop the conflict, and urges the parties to stop the fighting and start a comprehensive dialogue.

She also urged Ethiopians in the United States to stay away from hate speech, and to play a responsible role rather than fueling conflict.