Citizens and residents congratulate the UAE on its fiftieth anniversary.. "Long live the union of our Emirates"

Citizens and residents congratulated, on social media, the UAE, government and people, on its fiftieth National Day, which falls on December 2nd. 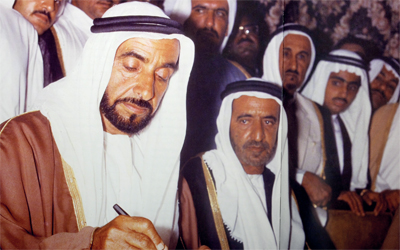 Citizens and residents congratulate the UAE on its fiftieth anniversary.. "Long live the union of our Emirates"

Citizens and residents congratulated, on social media, the government and people of the UAE, on its fiftieth National Day, which falls today, December 2.

On this occasion, the hashtags of the #golden_jubilee_of_union, #fifty_years_together, and #fiftieth_national_day topped the list of the most frequently discussed topics on the social networking site "Twitter", in the UAE and several Arab countries, including Saudi Arabia, Bahrain, Oman, Kuwait and Egypt.

For their part, citizens and residents of the UAE congratulated its fiftieth National Day, and expressed, on this occasion, their love for the UAE and their pride in belonging to a country that does not know the impossible, pursues achievements, and looks forward to the future.

Tweeters expressed their pride in belonging to the United Arab Emirates, in which they feel safe and stable, and their confidence that it is moving towards more achievements, progress and prosperity, as it was in the past fifty years, and one of them said: "Today we celebrate fifty years of our nation's achievements... Our eyes are always on the future in a country that does not know the impossible... Long live your glory, UAE."

Another said: "50 years have gone by filled with achievements, prosperity and prosperity... and another 50 years to come will be filled with ambitions and challenging the impossible."

Another said: "The UAE is the past, the present and the future. From here, we recall our authentic past, which we are proud of. We are proud of our present, and we look forward to the future and the next fifty years with confidence."

Tweeters recalled the efforts of the founding leader, the late Sheikh Zayed bin Sultan Al Nahyan, may God rest his soul, with the UAE reaching what it is today, and his insightful vision that called for union. .

Another said: "Our emirates are very good, and the palm of their builder is merciful."

Tweeters wished the UAE continued glory, security and safety, and continued achievements that no one preceded it, and one of the tweeters said: "We will not find a word of thanks to the homeland better than His saying, Blessed and Exalted be He:

"My Lord, make this country safe."

Another said: "Every year, you, my country, are in glory, honor and prosperity.. Every year, you are in safety and security, and in the protection of my Lord, the Most Gracious.. Every year, our sheikhs, our people and our land are in blessing and peace.."

Tweeters also congratulated the leaders and sheikhs of the Emirates on the occasion of the National Day, thanking them for everything they do for the sake of the nation's elevation, and wishing them continued wellness and giving. One of them said: "Every year and the best country is fine.. ".

In a related context, tweeters from different countries of the Arab world interacted with the UAE National Day, congratulating the UAE and its people on their fiftieth National Day, saying: "Happy New Year, Zayed's children." They also published some photos and videos of the celebrations taking place around the world on this occasion. .

For their part, Saudi singers expressed their joy on this day, noting that the UAE is their second country, and that the UAE National Day is also their day, wishing continued glory and safety for the Emirates, its people and its rulers.

One of the congratulatory tweeters said: "We congratulate our brothers and cousins, the government and the people. We ask God to perpetuate prosperity, security and stability for you. Every year, the Emirati people and the generous leadership are a thousand good and more progress and prosperity."

Another said: "Together in prosperity and distress, the UAE and Saudi Arabia are the true meaning of a common destiny."

Tweeters from the Sultanate of Oman also participated in the “Emirati National Day” hashtag, and they launched the hashtag #Oman_Celebrates_the Emirates, and expressed their love for the Emirates and its people and congratulated them on their National Day. We are all proud and loving this country.. Every year and the

Another said: "I congratulate the leadership, government and people of the United Arab Emirates on the occasion of the fiftieth National Day, wishing them progress and prosperity, and we share their glorious joys on this day."

From Bahrain, tweeters also published photos and videos of some of the celebrations that were held in their country on the occasion of the UAE National Day in several regions of the country, where the UAE flag flew alongside the Bahrain flag, and one of the tweets said: “Every year, the Emirates and the people of the Emirates are safe, secure, stable, renaissance and development and prosperity.”

Tweeters from Egypt also participated in the UAE's celebration of its National Day, and one of them said: "From Egypt... every year, and the sister, the government and people of the United Arab Emirates are a thousand good."

It is noteworthy that the UAE National Day falls on the second of December of each year, when the United Arab Emirates celebrates the anniversary of the establishment of its federation, which was founded in 1971.