"Bill increases up to 50%", the forecast without government intervention

From January 1st, the energy bill in Italy could jump by 50%. The increase in the price of gas also raises that of electricity, largely produced with methane. The hypothesis is supported by Carlo Cottarelli, director of the Observatory on Italian Public Accounts 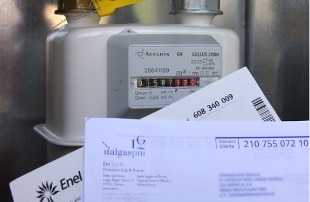 02 December 2021The National Consumers Union collects the estimates released by the Nomisma company and talks about a record sting: "

gas bills will increase by 50%, electricity bills by at least 17%, but perhaps by 25%", says Marco Vignola, head of the energy sector of the National Consumers Union. "This is why the 2 billion allocated by the government or the 3 that seem to be looming on the horizon are a joke" concludes Vignola.

maneuver of the Draghi government

, the executive has already announced measures to calm the prices of bills, it foresees 2 billion, and another 1 billion should come from the savings made on the tax reform. A figure that the National Consumers Union rejects with respect to the expenses that Italian families will have to bear in the current year and in 2022.

explains the accounts: "In the quarter October-December 2021, the tariff of gas, set by the Regulatory Authority for Energy, Networks and the Environment (Arera) on the basis of international prices, is

. But given the market trend

an increase in methane inevitably also raises the price of electricity

. "Today on international markets electricity costs from 250 euros per megawatt hour to almost 300 - explains Tabarelli -. In the past it seemed like a lot when it cost 40-50 euros. Without state intervention, on January 1st the tariff increase (decided in Italy by the manager of the energy markets, the GME) will be from 17% to 25% ".

Hypothesis that finds the approval of Carlo Cottarelli

, director of the Observatory on Italian Public Accounts, who interviewed at Porta a Porta spoke of a "realistic" increase. "In this quarter - explained Cottarelli - the state has put 3.5 billion in subsidies to keep the cost of bills low, for next year two billion are expected, which will perhaps be increased when the budget law is approved. But 3.5 billion in a quarter means going at an annual rate of 14 billion, while now there are two or so. There will be an increase in the first quarter, unless the government decides to have the same level of subsidies. " .

electricity and gas bills to 3.368 euros per year

. An increase of 1,227 euros compared to the expenditure incurred in 2021. The association believes that the government should find at least 10 billion to avoid the sting on Italian families. The Codacons is aligned on the same figure.

The International Energy Agency (Iea) has announced that

2021 will break all records for new installed renewable power

China will drive the growth of clean energy (albeit cautious in leaving fossil sources).

In 2026, renewables will reach 4,800 gw, the equivalent of all the current power of fossils and nuclear combined.

Yet, according to the IEA, all of this is still not enough.

To reach the goal of zero net emissions around mid-century, set at the Cop26 in Glasgow, double the new power expected between now and 2026 would be needed.