It looked like an apartment riot in Gävle - but soon turned out to be an assassination attempt on a Chechen regime critic. Two people were convicted of the act, but the question of who or who was behind it extends beyond that. Assignment review may reveal that a secret intelligence report blames Russian President Vladimir Putin for the attack in Gävle. The Kremlin denies all involvement, in an email to SVT. 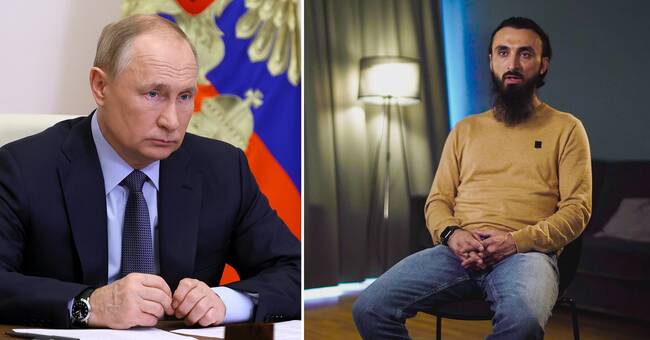 Tumso Abdurachmanov is perhaps Chechnya's biggest critic of the regime.

During the winter of 2020, he will reach hundreds of thousands of followers via social media from his apartment in Gävle.

What he does not know then is that he is shadowed.

Foreign men map his life and movement patterns in Sweden.

One day he wakes up in his bed when a man attacks him with a hammer.

After a few bloody blows, Tumso manages to overpower his attacker, knocks him down and begins to interrogate him, while he broadcasts the process live on his Instagram account.

- I picked up the phone and called a good friend.

I said I had been assaulted and asked him to call the police and doctors.

Then I went back and started a live broadcast on Instagram where I asked him questions, says Tumso Abdurachmanov.

The police in Gävle are first on site.

But soon you realize the seriousness of what happened and connect SÄPO.

- The reason we took over was that there were suspicions that foreign power could be behind this attempted murder, says Daniel Stenling, head of counterintelligence at SÄPO.

SÄPO: The attack was ordered

A man and a woman are convicted of their involvement.

In the Court of Appeal, Ruslan Mamaev, the man with the hammer, receives 12 years in prison for attempted murder.

The woman, who is currently in a relationship with Tumso Abdurachmanov, is given 1.5 years for aiding and abetting aggravated assault - after using a password to let the attacker into the apartment.

Both are deported from Sweden.

Another man, the then 39-year-old Chechen Imran Chaschanov, is suspected by SÄPO as one of the brains behind the attack and is missing and internationally wanted.

SÄPO's conclusion is that the attack was ordered by the Chechen regime, but Chechnya's Minister of Information Achmed Dudaev does not want to answer Assignment review questions.

- I honestly do not understand why you think we would need or want to comment on what any of the countless internet heroes are doing.

We have neither the time nor the desire to react to this individual or others like him.

Assignment review has taken part in a secret report from a European intelligence service with sensitive material about who is responsible for the attack on Tumso and other Chechen regime critics in Europe.

It describes how Russia and Chechnya have developed their ability to carry out extrajudicial executions and points to a special unit within the National Guard, SOBR Terek, which has the capacity to organize and carry out murders.

The report places responsibility for the Chechen murders and attempted murders, including the case in Gävle, on Vlamidir Putin.

It states that as long as Chechen President Ramzan Kadyrov does not go too far, Putin will keep him.

An image shared by the Swedish Defense Research Agency, FOI, in Sweden.

- As a leader for Russia, you can be considered responsible.

Especially if you do not seem to do anything concrete to curb this type of violation of human rights and freedoms and violations of other states' sovereignty by sending murder patrols around Europe, says Fredrik Westerlund, security policy expert at FOI , who read the report.

Answer from the Kremlin

For Tumso Abdurachmanov, it is clear who ordered the murder.

- Of course, the Russian regime in Chechnya is behind this.

It is not such a crime that only one person is behind it.

It is the state that is behind it.

It is a political crime, he says.

In an email, signed "President of the Russian Federation, Vladimir Putin", his spokesman responds to the Mission Review: "We really have nothing to do with these murders of people in European countries."