Hessa bint Issa Buhumaid, Minister of Community Development, confirmed that the UAE has generously invested, since its establishment, in 100% of its human energy, both men and women, noting that the UAE leads the Arab world in representing women in decision-making centers and positions. 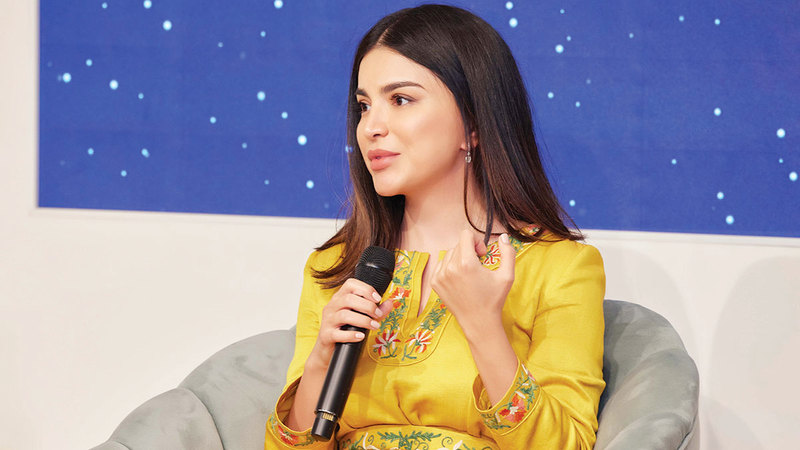 The Minister of Community Development, Hessa bint Issa Buhumaid, confirmed that the UAE has generously invested, since its establishment, in 100% of its human energy, both men and women, noting that the UAE leads the Arab world in representing women in decision-making positions and positions.

This came during a session on the role of leadership women in promoting gender balance, organized by the pavilion of the Republic of Uzbekistan, in cooperation with the Emirates Council for Gender Balance at the Women’s Pavilion at Expo 2020 Dubai, to discuss global visions for the best ways and policies in support of women’s empowerment and achieving gender balance in Various fields, during which the positive repercussions of gender balance in leadership positions and decision-making positions were discussed, as well as the efforts and achievements of the UAE and the Republic of Uzbekistan in this regard.

The session discussed many axes, including the development of the gender balance file in the Middle East and efforts to promote it at the regional level, indicators and results related to women's economic empowerment, especially their participation in economic and cultural life, the challenges facing achieving gender balance, and the role it plays in Achieving human and economic development in the region.

The session came within the framework of the program of the Uzbek Ministry of Culture at Expo 2020 Dubai, in which Hessa bint Issa Buhumaid, Deputy Chairman of the Board of Trustees of the General Organization for Support and Development of National Media, Member of the Gender Equality Committee, Vice President of the Art and Culture Foundation of the Ministry of Culture spoke. In Uzbekistan Saeeda Mirziyoeva, the Regional Director of the United Nations Women in Europe and Central Asia Alia Al-Yasser, and moderated by the Secretary-General of the Emirates Council for Gender Balance, Board Member and Executive Director of the Dubai Women's Establishment Shamsa Saleh.

Hessa Buhumaid highlighted features of the UAE leadership’s support for women, which has continued generously and generously since the founding stage and the declaration of the UAE Federation in the seventies of the last century, “as it sent male and female students, employed young men and women, and empowered men and women. Thus, the UAE has invested in 100% of its human energy, so that its human resources have become a confident bond that meets the most distant development aspirations of the leadership of the UAE, and this is the secret of its strength and the key to its leadership and supremacy in the coming years.”

She referred to the beginning of the political, cultural and scientific empowerment of women with the establishment of the General Women's Union in 1975, at the initiative and vision of Her Highness Sheikha Fatima bint Mubarak, Chairwoman of the General Women's Union, President of the Supreme Council for Motherhood and Childhood, Supreme Chairwoman of the Family Development Foundation, and to the Cabinet's decision to form the "Emirates Council for Balance between Gender” in 2015, and the supportive role of the wife of His Highness Sheikh Mansour bin Zayed Al Nahyan, Deputy Prime Minister and Minister of Presidential Affairs, Her Highness Sheikha Manal bint Mohammed bin Rashid Al Maktoum, President of the Emirates Council for Gender Balance and President of the Dubai Women’s Foundation, pointing to the World Bank report "Women, Business Activities and the Law 2021", which revealed the leadership of the UAE, and its place in the first place in the countries of the Middle East and North Africa, and the UAE leads the Arab world in representing women in decision-making centers and senior positions, according to a report by the Council on Foreign Relations in the United States American (CFR), whichHe revealed the superiority of the UAE by 27% in terms of women's representation in ministerial positions, 50% in terms of women's representation in senior legislative positions, and 49% in terms of the degree of political parity.

For her part, Saida Mirziyoeva expressed her happiness to participate in the session along with prominent professional leaders who have great efforts to advance progress in all walks of life, stressing Uzbekistan's firm commitment to raising the rate of women's education, due to its great importance in ensuring sustainable development in the future and achieving comprehensive development.

She said, "Uzbekistan is working hard to change stereotypes about the limited role played by women, as empowering women is a national priority, as the percentage of female parliamentarians has reached 32%, and women participate in many sectors such as information, communications, innovation, and energy, engineering and information technology.

Saeeda added: “Bias always comes with ignorance and fears, so sufficient awareness, flexibility and a societal culture that supports women is what makes the idea of ​​balance indisputable,” pointing to the “importance of these global dialogues to make societies a just and safe place for women and girls, and to discover new meanings of balance, To imagine a modern image of a woman who can flourish wherever she wants, because if women advance and nations flourish, humanity transcends.”

While Alia Al-Yasir stressed the importance of education in achieving gender equality.

“Inequality in educational systems will persist unless we address negative stereotypes,” she said.

At the same time, girls’ right to and access to education can have a significant impact on achieving equality and helping countries grow by exploiting their full potential.”

The Emirates Council for Gender Balance will host many events and sessions, in addition to the “Vision and Journey” initiative at the Women’s Pavilion at Expo 2020 Dubai, in cooperation with Cartier, as it attracts a number of influential international women figures in various sectors and fields, including women ministers, and officials of organizations world leaders, wives of heads of state, and other leading women in society, to enrich the dialogue in the global file of women and balance, as the council’s activities are held continuously throughout the exhibition period.

The National Pavilion of Uzbekistan, in cooperation with the Foundation for the Development of Arts and Culture of the Ministry of Culture of Uzbekistan and the official partner of the pavilion, presents a number of events aimed at introducing the culture and artistic heritage of Uzbekistan, and its diverse capabilities, through "Expo 2020 Dubai".