The Iraqi government halts the reconstruction of devastated Mosul

The search for ISIS treasures buried in the rubble of Mosul, the city that was retaken from this terrorist group after a nine-month siege in 2017, is the last obstacle that contributes to delaying the reconstruction of this great city. Local residents accuse the authorities of preventing 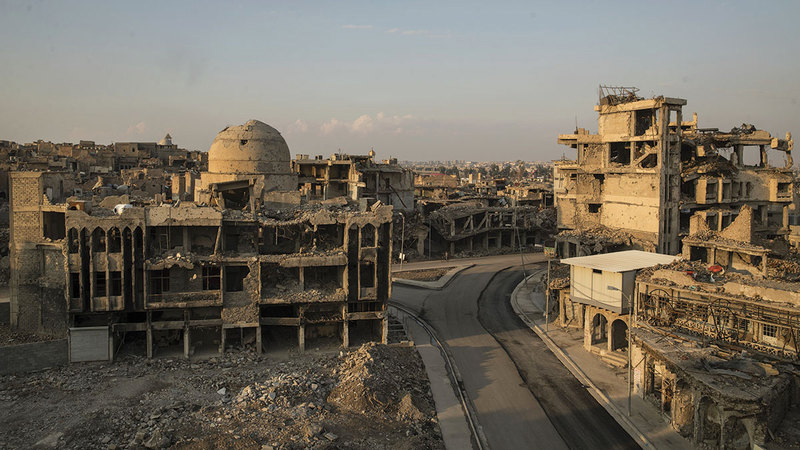 The Iraqi government halts the reconstruction of devastated Mosul

The search for ISIS treasures buried in the rubble of Mosul, the city that was retaken from this terrorist group after a nine-month siege in 2017, is the last obstacle that contributes to delaying the reconstruction of this great city.

Locals accuse the authorities of preventing them from rebuilding their homes, because officials suspect they are looking for money and other valuables that ISIS stashed before it fled the city.

"A month ago, two workers who were removing rubble from destroyed houses near our house found black plastic bags filled with money," said a resident of western Mosul, where the destruction is at its worst, and he only gave his name (Khaled, 32 years old), "and that's why the operation was stopped." Temporarily rebuilding the city.” The two workers who found the money told him that the bags were covered in mud and burnt with fire, but that the notes inside the bags were intact.

(Khaled) said that about six months ago, about 1.6 million dollars, in addition to gold and silver coins, and gold bars were found by construction workers who were removing rubble from one of the houses that were bombed.

He added, "The money and gold coins that were found were hidden in barrels and plastic bags buried, three meters underground."

And ISIS obtained huge sums of money through taxes and looting from the population, which was under its rule in western Iraq and northern Syria, for three years during which Mosul was the de-facto capital of ISIS.

During the last stages of the siege, the leaders of ISIS became trapped in the city, and therefore it is believed that they buried the money, in addition to gold and silver, to protect it from bombing, or perhaps so that it would not fall into the hands of the Iraqi army.

Often, some of those who knew where these funds were buried were killed, as the last strongholds of ISIS were subjected to missile and artillery bombardment, before government forces seized them.

Regardless of the source of these treasures, the discovery of this money was enough to stop the issuance of rebuilding licenses by the authorities, as housing applications are now thoroughly examined, and some are rejected.

The fear that former ISIS supporters in Mosul will unearth the buried treasure is a symptom of the deep suspicion that is dividing the Sunni Arab population of Mosul and the Shiite-dominated government in Baghdad. Indeed, trust between the two sides does not exist, and its absence may be enough to prevent the rebuilding of Mosul, which was once the jewel of Middle Eastern cities, and whose medieval mosques and markets are among the jewels of Islamic architecture. Its destruction, culminating in the final months of the 2016-2017 siege, therefore amounted to the cultural loss caused by the Allied bombing of Dresden in World War II in 1945.

For more than 1,000 years, Mosul remained a great commercial center, in addition to being a center in which many races, such as Arabs, Kurds, and Christians, as well as other ethnicities and sects lived.

But the terrorist organization ISIS has put an end to all this diversity, and its toxic legacy continues to fuel the anger that has undermined the physical, social, and political restoration of the city, as it was before.

One of the symptoms of division

Doubts about ISIS treasures buried inside the city are just one symptom of the divisions that were exploited and deepened during ISIS' criminal rule. One of the most famous important sites that were destroyed following the ISIS takeover of Mosul is the Great Al-Nuri Mosque, and its leaning minaret known as the “Hadba,” which was considered a symbol of Mosul since the twelfth century. The leader of ISIS, Abu Bakr al-Baghdadi, declared himself the caliph in 2014, after his militants managed to capture Mosul, which is the second largest city in Iraq, and overpowered forces much larger and stronger than them. When ISIS came on the brink of losing the mosque complex to advancing government forces three years later, it destroyed it with explosives.

Now the question that haunts all the residents of this city remains: Can Mosul really be reconstructed? Its Sunni Arab population is considered one of three large communities, and the remaining two are Shiites and Kurds, and these three communities often considered that anyone living in Mosul during the presence of ISIS from outside these three communities, as a collaborator with the terrorist organization. On the other hand, government corruption is the norm everywhere in Iraq, and in Mosul the residents of this city exaggerate the degree to which they have been neglected. East of the city

Part of Mosul has been rebuilt by homeowners and private businesses, in the half of the city that lies east of the Tigris River, where the fighting has been less devastating than in the west of the city, where ISIS held out to the last minute. "Life in the east of the city is much better than in the western region, where the old city is," said one of the city's residents. The electricity is better, coming in about five hours a day, schools and universities have been rebuilt and are now open, in addition to new stores, cafes and beauty salons.” Many residents of the heart of Mosul and the old city have moved to the east of the city, or live in the suburbs.

But the most important and vital features of life in Mosul have disappeared, and perhaps they will never come back. Until the recent past, before ISIS took over the city, it was inhabited by a mixture of ethnicities, and one can see the Kurds in their traditional loose clothing, Christians visiting their old churches, Sunnis in their old mosques, in addition to the Yazidis, Turkmen and Shiites.

Frictions often occurred between these ethnic groups, but they managed to coexist with each other. But when ISIS came it put an end to it all, Christians and Shiites fled, Yazidis were killed and raped, and many Turkmen joined ISIS. The Kurds were in the past an important part of the city's population, but the Kurdish man who introduced himself as Ahmed and who fled the city permanently, and settled in Erbil, says, “There are no Kurds in Mosul now. Although in the neighborhood where I lived there were about 200 Kurdish families, there are now three families.” Ahmed added that the Yazidis who survived ISIS joined the Shiite militias to “revenge the Sunnis who joined ISIS.” It is unlikely that this sectarian hatred will subside soon, but until it does, Mosul will not be restored.

But the terrorist organization ISIS has put an end to all this diversity, and its toxic legacy continues to fuel the anger that has undermined the physical, social, and political restoration of the city as it once was.

• The fear of ex-ISIS supporters in Mosul exhuming buried treasures is a symptom of the deep suspicion that divides the Sunni Arab population of Mosul and the Shiite-dominated government in Baghdad.

Indeed, trust between the two sides does not exist, and its absence may be sufficient to prevent the rebuilding of Mosul.