Mondial-2023: for the Blue, raise the tone and keep the lead

After its mixed victory against Kazakhstan, the French women's team is back against the Welsh on Tuesday (9:10 pm) in Guingamp, where it hopes to "let go of the horses" and distance its… 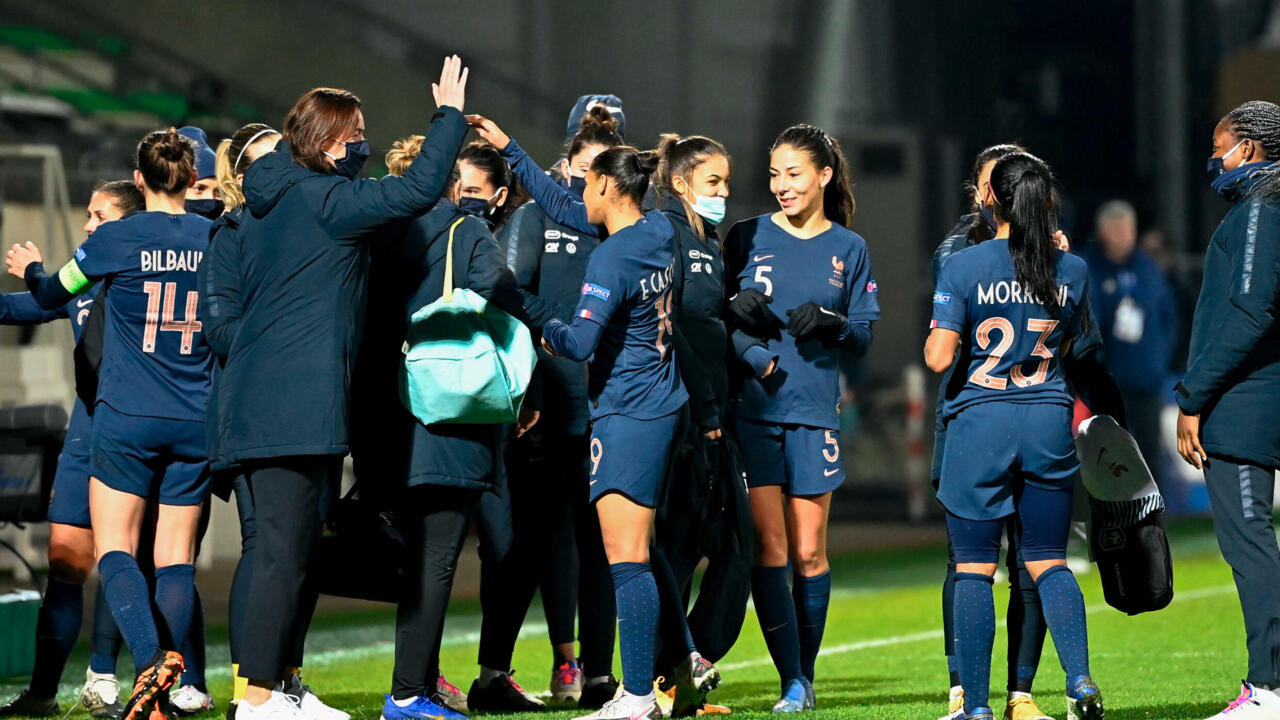 The road to Australia and New Zealand, host land for the next World Cup, has so far looked like a long calm river for the Blues who have pocketed five victories in as many games, without trembling if not. 'is in Slovenia (3-2) at the start of the season.

At the Roudourou stadium, where some 8,000 spectators are expected, the time has come to face stiffer adversity with Wales, their runners-up, probably the only team to be able to challenge the first directly qualifying place.

The 34th nation in the Fifa ranking, hung by the Slovenes last month, has two points less than the French before landing in the Côtes-d'Armor.

"Pressure? No, but we have to be serious and focused from start to finish. We want first place and we will do everything to win," said midfielder Sandie Toletti on Monday.

The objective is above all accountable, of course, but Corinne Deacon also expects a more successful performance than against the weak Kazakhstan (6-0), an ultra defensive formation against which the Blue fished in the finish, sometimes with an unusual technical waste which generated regrets.

"If we put the handbrake a little bit on Friday to let go of the horses better tomorrow, that's fine with me too. I'm in my role to tell them when I'm not satisfied," said the coach on Monday to the press. predicting a "more balanced" game against a Welsh side who "are trying to build with very fast forward-facing play".

For this expected duel, the boss of the Bleues could return to a more classic training, four days after having tenured the usual replacements (Hawa Cissoko, Kenza Dali, Viviane Asseyi), offered a first selection to the young Lyonnaise Selma Bacha and spared some executives like Grace Geyoro, who entered the second half.

His nugget of attack, Marie-Antoinette Katoto, played only the first 45 minutes, the time to register his ninth goal in five appearances this season in the tricolor jersey.

Last game of the year

In Vannes, Deacon was delighted to have finished the game without cardboard or injury, good news for the one who left for Brittany without the Parisian Sakina Karchaoui, injured before the rally, nor the Lyonnaises Amel Majri (knee) and Wendie Renard (thigh), his captain still not recovered from a muscle injury that occurred in September.

Sunday afternoon, all the players trained normally from Saint-Brieuc, where Federation president Noël Le Graët came to visit them at lunchtime.

"He shared a little moment with the players, congratulated them for the course until today. And above all he forbade them to lose at Guingamp", his stronghold where he was mayor and president of the football club, Deacon joked.

The poster against the Welsh comes to end a year 2021 sportingly without a hitch, apart from the friendly lost 2-0 in April against the American world champions, and marked by a strong renewal of the workforce, with in particular the gap of Amandine Henry and Eugénie Le Sommer.

Les Bleues will then go to sleep for two and a half months before attacking a busy 2022 year with the Tournoi de France in February (against the Netherlands, Finland and Brazil), the last four qualifying matches for the World Cup in April and September, and especially the Euro in England (July 6 to 31) where the Habs dream of winning a first international title.